In DMing 101 I’ll be giving generalized advice on how to run a tabletop role-playing game. The articles will not presume any knowledge, except being able to read. And maybe knowing what dice are. And paper. And a computer. Maybe some other stuff. I’ll also presume that you can remember that DM means Dungeon Master. Some people call it a Game Master or GM, but I don’t. Suck it up.

There are a few quick start guides on how to DM out there, but DMing 101 will offer a fairly easy set of tips that a novice can follow to make his/her games something truly memorable. 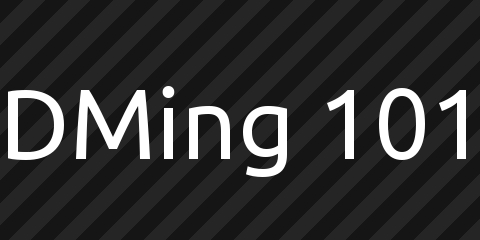 The hardest part about your job is the players. Presented with a world without consequences your so-called friends will reveal themselves as the lunatic genocidal maniacs that they hide for the other six days of the week, so how are you supposed to deal with these mental-ward-escapees?

When building their characters it’s worth talking to each of your players to gauge what kind of people they’re creating. Consider their motives, why have they taken to a life of adventure, who or what do they hold valuable, and what kind of quest might drive them forward? These can help you tailor your story and quests to give your players a personal connection. Perhaps add people from their character’s background to your NPC pool, or devise a scene that mimics a moment of their history.

There’s nothing wrong with imposing a few restrictions on your players characters, after all you’ve already imposed one by setting the genre, what use is an internet hacker in medieval Germany after all? If you feel it necessary there’s no reason not to ask your players to take certain conditions into account when writing their characters. Take these for example:

A few simple guiding notes like these can help you get a campaign started, or set a theme throughout. You can, if you feel you need to, ban certain classes/races or even entire rule-expansion books for the purposes of keeping your players in keeping with your world, but be careful not to over-restrict them. Your group will want to make their character, their way, not just play your storybook.

Maybe should have mentioned this in my first DMing 101 article. If you haven’t read it yet, do so now, then add this to the list:

Rule 5: Keep it away from the table! You’re people, you argue, you disagree. Your characters are much the same, but it’s important to remember that your disagreements are not theirs, and vice versa. It’s bad gaming to pick on a character because her player owes you £20, and it’s just as bad to hold a grudge against your DM because your character broke his own legs by accident (Mike!) so do your best to separate life and game. If your differences are insurmountable, it may be time for someone to leave the group.

With that firmly in mind, I actively encourage you to pitch your players against one another! Amazing things can happen when players find their characters directly at odds with another member of the group, and when their motives clash. It’s not a lot of fun when one character habitually steals from the rest of the party, but suppose two players have need of a single unique item. Who gets to use it? Whose need is greater, and how do you decide?

As a prime example (from a game I once ran) a paladin of the god of war disagreed with the dwarf-fighter’s decision to kill a woman driven to violent insanity by a consumptive plague. While she was barely capable of damaging the heavily armoured party members, the dwarf thought it was a kinder thing to put the woman out of her misery before she caused herself more pain, but the paladin felt that her death was dishonourable as she was unarmed and unaware of her actions. The resultant argument was one of my prouder moments at the gaming table.

Of course, life will inevitably get in the way. Players will come and players will go, and one of the hardest things to do is to write their characters in and out of your campaign without it seeming too jarring. Writing a player out can be fairly simple, they could have engaged in a personal quest, or disappeared into a deep bottle a couple of towns back. Who knows, one day that character could come back in a blaze of glory.

A new character is best introduced as part of a scene, introducing them mid-action, or perhaps having the rest of the group stumble across a scene in-progress that’s part of the new characters story. Perhaps the new character comes with a new quest of his or her own, or (by prior arrangement with the player) forms part of another character’s quest, or directly influences a larger storyline.

NEXT WEEK I will be bringing together all the advice I’ve given so far into a mini-campaign, but so that you guys know I’m not cheating and using an old campaign, you guys are going to write it for me!

If you haven’t liked GOSW on Facebook yet, you may want to do so today. The first comment on the link to this post sets the genre, and the next five comments write characters that I’ll tailor the adventure to. For those of you interested, here’s your character sheet:

Keep your answers short and sweet, no longer than 5 words each, and let’s see what we come up with!

UPDATE – The genre is Sci-fi noir, and all character spaces are taken!

My name is Joel (Terra_Phi most places) and I am an experienced DM of nearly 7 years. I also run a site called Quotesfromthetabletop.net with a friend of mine who’s much better at site-building than I am. If you’re interested in getting into tabletop role-playing, our site is full of good reasons, all the stupid and brilliant quotes and stories that could only ever happen at the table