When I opened my box, there it was sitting neatly near the bottom of the box… The exclusive Superfight deck for Loot Crate. But just what is Superfight and is it any good? Read on to find out more about the game.

Recently, I decided I wanted to get myself a Loot Crate box. So that I did, when they released some of their older boxes. I went and bought myself the Play box, which had some great items inside, but there was an item I didn’t see listed – or at least I didn’t know what it was at first. When I opened my box, there it was sitting neatly near the bottom of the box… The exclusive Superfight deck for Loot Crate. But just what is Superfight and is it any good? Read on to find out more about the game. WARNING: This game is Not Safe For Work…

I’m going to warn you now: I compare this game to Cards Against Humanity… And it’s up to you to decide which game you would prefer sitting on your shelf. Both games are great fun.

Your character could be anything, from an average woman, to a young boy wearing his underwear on his head; or more specific characters, such as George Bush. You give your character an attribute and it goes around in turn order for players to unveil what their superhero is. The remainder of your hand goes into two separate discard piles, one for the black cards and one for the white cards. When everyone has done this, each player picks up another black card and puts it on their superhero. Then, the players discuss who would win the fight. The winner scores a point and the game continues until an end point has been decided. 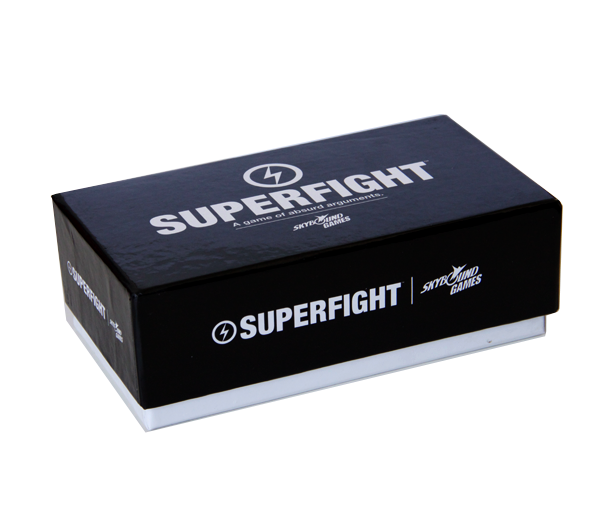 It’s not necessarily the most safe for work game out there, but some of the combinations are outright hilarious, so it’s worth a look at. One pro side to this is the majority of the cards seem relatively inoffensive. With this in mind, if you want to play a silly game with people who prefer games that are a little more politically correct, whilst I’ve not seen all of the cards out there, this game might offer that “CAH-Feel” without all of the hoo hah of having to explain what Bukakke is. If you don’t know, don’t look it up. We accept no responsibility if you do look that up.

Same as Cards Against Humanity, the game is really well presented. It’s very simple too, with two different decks, representing two types of cards. It’s really easy to understand, simply based on the looks of the cards. The game comes in a nice enough box, again sharing an incredibly familiar trait of Cards Against Humanity of the black on white feel. You know that when you open the box, it’s going to be a lot of cards. The game certainly feels well polished and nicely packaged, plus it doesn’t take up too much room.

I really like Superfight and it makes for a really nice replacement or even compliment to Cards Against Humanity. It’s a nice addition to our little geek game set and because it’s not purely about “who is the funniest”, but rather it has a lot more depth to with its ‘character creation’ (sort of.) This earns it a unique spot in our geek games collection. It’s easy to get into, especially if you’ve played any card games of its kind before. Have you played or heard of Superfight? Would you rate this or Cards Against Humanity higher and why? Let us know in the comments below, over on Twitter or Facebook.