I just finished the remastered version of Grim Fandango, one of those games I’ve been meaning to play for a good decade, ever since I spotted a copy in a games’ shop, still in the classic A4 cardboard box that went out of fashion just a little too soon, taking with it the artbooks, full colour manuals and the little extras that never needed a collectors edition before. I sincerely doubt that this copy had all that, but there just never seemed to be a time I could justify the tenner until finally it was too late to even try.

Many years later, up pops the remastered rerelease on Steam, long after the shop in question had shut down and my disk drive had gone with it, so a digital copy was a welcome find indeed. And once again it sat in my library waiting for me to actually sit down and get on with it, and this year I just happened to resolve to play more games. Well, game played.

Lucas Arts are regularly hailed for their game-creating genius, rich and intriguing worlds, loveable characters and fantastic stories, and Grim Fandango has it all. Manny Cavalera is a travel agent working at the Department of Death, the agency in charge of ushering souls to the afterlife via the mode of transport that they earn in life; for the earnest and loving, a ticket on the luxury train-line, the number 9; for the heartless swindlers and lowlives, a walking stick with a compass, watch out for the forest lads, it’s full of monsters.

Manny’s had a raw stretch with a bunch of lousy leads, and goes looking for a decent soul to sell a high quality package to, even if he has to steal it. When he finds his lead he gets what he didn’t want, confirmation that he’s being hard-done by, because he can’t even give the kindest woman he’s ever met, Mercedes Colomar, a ticket on the Number 9. He’s being blocked, but before he can fix the situation, Mercedes takes herself on her merry way, and in the process of trying to find her, to set things right, Manny stumbles across one hell of a conspiracy.

The land of the dead is filled with the pleasures one can only reap in the afterlife, and people working hard just to find their way out of it into paradise beyond. Some people have even given up believing that there is anything to move on to, and settle in for an eternity of same-old same-old, reclaiming jobs they had in life, sailor, mortician, croupier. The only vocation that has changed radically is that of florist, because in a world filled with death, such abundant life is a weapon.

It’s a fantastic tale, set in a land no less alive for being almost entirely populated by the dead, and I’m always a sucker for anything with a strong noir theme. Intrigue, betrayal, plush lounges and seedy dives, criminal masterminds and femme fatales, and all about a dame our hero just can’t get out of his mind, Grim Fandango has it all, so is it a perfect game?

Let’s not forget here that at it’s core this is a point and click adventure, and so the gameplay is predominantly puzzle driven. By and large the puzzles are fairly interesting, challenging without being unsolveable, and you can generally figure out what needs to be done by fully exploring each level and picking up everything that can be picked up.

Problems begin to arise with those puzzles that aren’t quite so easy to deduce from context. There’s a line at which something that is difficult and clever instead becomes obtuse and irritating, and even clever people just feel a little insulted. Intellectually I prefer the knife to the hammer, and I feel like I paid my dues with these games applying every item to every other item until something sticks, and frankly I was bored then and I’m bored now. Grim Fandango has just a few too many situations that left me saying things like “Well obviously I was supposed to show the cigarette case to her, of course I’d assume she thought it was a bomb.” or worst of all, “I did  that already, now you’re telling me I did it slightly wrong? Oh well, sorry!” 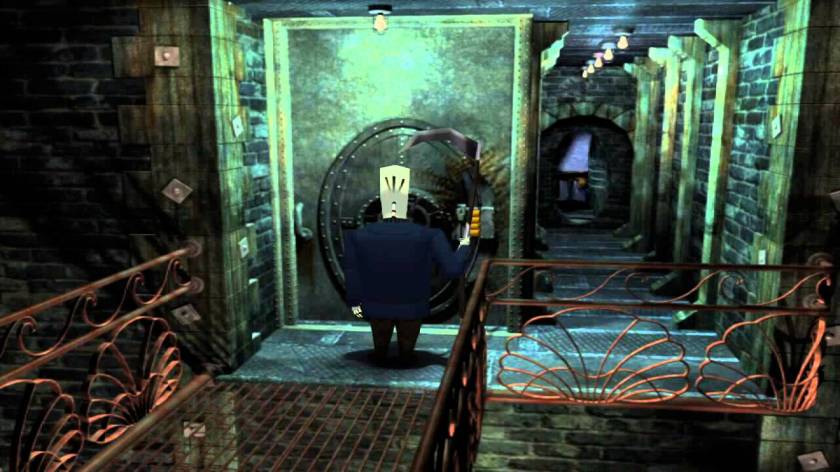 Intelligence should be something a player is rewarded for, and for the most part it is, but there are times when if you’re not thinking the exact same way as the designers then you get nothing but stuck. More of these games should be designed with a “one lock, many keys” attitude in mind, where rational thought can yield multiple solutions to the same problem, possibly with different outcomes that alter the way the story progresses.

Actually that’s a good idea, more of that please.

These days you can always cheat your way through the rough spots in games like Grim Fandango, especially the older classics because people have been there before you, done that hard graft, and put the solution online for you to read. To some it may feel like intellectual dishonesty, but I feel that as a member of a generation capable of using the internet I am within my rights to bypass the “throwing spaghetti at the wall” step of solving these games so that I can enjoy the story they have written while I can still remember it.

I haven’t forgotten the days when such things just wouldn’t work, nor do I yearn for them. In the same way I’m glad I no longer live in a world where polio and smallpox are a things to worry about, I’m also happy to take advantage of the wealth of knowledge available to me at a moment’s notice. So long as walkthroughs are used sparingly, saving them for a measure of last resort once all reasonable solutions have been tried and failed is an entirely acceptable means of side-stepping those puzzles that are somewhere beyond infuriating.

Leaving us with my usual question, what do you think? Do you use walkthroughs? Is it cheating, or just refusing to bow down to the sideways-logic of the designer? Talk to me in the comments section down below or on our Facebook page.

7 thoughts on “Grim Fandango – The Problem with Walkthroughs”