Netflix drops another Marvel title, another one from the “lesser known” stack but one we’ve been waiting for now for a long time, ever since word first began about their Defenders series. Luke Cage makes his second appearance in the series following a rather heavy-handed cameo in Jessica Jones, and it looks like Mike Colter is settling in for a long run as the man with impervious skin. It’s every bit as noir and pulp-fiction-y as the Defenders have been so far, much dirtier and hardcore than the films, proving once again that the superhero genre isn’t just for kids.

I’ll not stand on ceremony here, let’s just launch straight into this.

It’s been roughly the length of a the events of Daredevil season 2 since Cage left Hell’s Kitchen and Jessica Jones behind. Without his bar, he’s now working two jobs cash-in-hand in Harlem to stay off the grid. But he’s a man of the people, a hero whether he likes it or not and inevitably he can’t help but step up when he’s needed.

The series takes us through Cage’s backstory through flashbacks and revelations at a fairly even pace. We see a lot of what we already know, the prison, the illegal experiments, and yes the original outfit that the Netflix series has been so excellent at dropping in for us. His relationships with the people around him make his character far richer than anything he actually says, if anything his motivations seem a little more direct in his second outing: “be a reluctant hero” which he does in superb style and several rather necessary costume changes.

I found Cage this time to be rather dull in fact. He’s got something of a Superman thing going on where his invulnerability removes all sense of threat except when those he cares about are in trouble; there’s a distinct lack of the moral ambiguity about him, and all attempts to slander him in the media fall flat as soon as his deeds change public opinion. We see again the difficulty of applying medical treatment to him when he needs it most, when a surgery is required and no scalpel can cut through his impervious skin, and yet that’s tinged with a sense of inevitability when the series still has plenty of episodes left.

In the blues and jazz corner – Gang Bosses of Harlem

Now I know Cottonmouth was the primary villain as advertised but I can’t honestly put him  as the primary antagonist because he is anything but. Truth be told there are three antagonists who we can spot from episode one. Cornell “Cottonmouth” Stokes begins very much as a false-start, a king with a borrowed crown, with his political pawn and cousin “Black Mariah” Dillard using her legitimacy to help him front his money laundering business – a bar and lounge, he repays her with the spoils of a life of crime. Very early on we learn the name of the next man up the chain, “Diamondback” presented to us as a Kingpin-esque man behind the curtain until he finally appears at the crescendo of act two.

I love a good villain, and a good villain is not all that forthcoming. While the named characters are steeped in Marvel history, especially concerning the New York area heroes such as Cage himself, most notably the former criminal gang “the Rivals” that Cage had been a part of (rather than the framed cop we see in the series), but a lot of the characterisation and personality feels a little… flat. Diamondback I’d say is worst of all, his justification is thin jealousy and his mad-dog strategy is uninspiring and builds no tension.

Firm favourite must be “Shades”. Worthy of mention as a comic-book easter egg, not only is he a member of the Rivals but also the father of the second Powerman, Victor Hernandez who has some overwhelmingly strong Iron Fist tie-ins. He’s sent by Diamondback to support Cottonmouth as Luke Cage topples the criminal empire he’s built around himself, but ends as the voice of reason, counselling patience, more sensible approaches, I even found myself rooting for him at one point.

Is Claire Temple Back?

Crowd favourite, The Night Nurse (Rosario Dawson) returns with a slight change of address and a new lease on life. Following the rather dramatic events in Daredevil Season 2 she’s decided to become a freelance medic to the supers, someone willing to work on the quiet for the people keeping her city safe. It’s a noble cause that sees her take up a bigger role in Luke Cage than she has done in seasons thus far, even including Daredevil 2.

Speaking of, a returning character that rather snuck up on me, Turk Barrett pops up in a couple of episodes. Remember the lowlife that Murdock kept shaking down for information in the first season of Daredevil? Took me a moment to realise that I was looking at the same guy. I may never have spotted him if it weren’t for Stranger Things.

Other big Marvel cameos, we see Misty Knight (Simone Missick) as the cop determined to take Cage down until those efforts bring her face-to-face with someone far worse, leading her down the path of revelation that did not end where I was expecting. Spoilers If you start suspecting Misty’s boss to turn out crooked, you’re going to be disappointed End Spoilers. There are plenty of barely visible cameos and mentions too, including Stan himself, and a lot of Hammer tech just to really drive home what kind of underhanded deals Justin Hammer deals in. 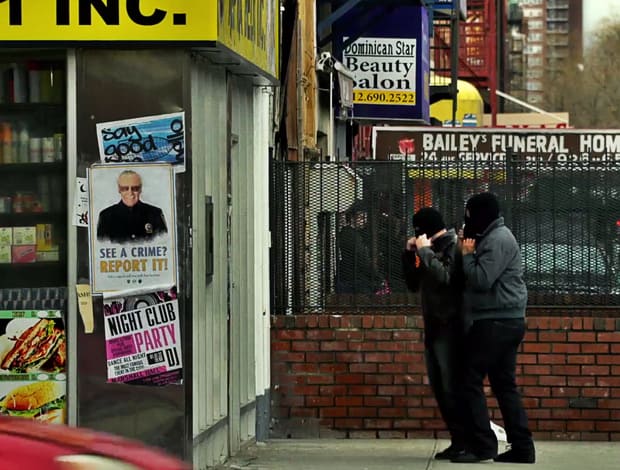 Don’t Call Me That

Three big themes in the series: Names, chess, and music. Music not quite so influential on the story, although there’s one hell of a jazz and blues soundtrack to be had out of this series. Chess plays a wonderful role, and there’s a lot of fun to be had spotting who’s playing what piece, some of them aren’t as obvious as you might think.

Cottonmouth Stokes hates the name he’s been given, and get’s aggressive when anyone uses the name in his presence, as does Black Mariah. Diamondback however seems to revel in the code name, and it’s reflected in his attitude to style and his overall fight-strategy. As for Cage himself, names are a big deal, he’s picked up the nickname Powerman from friend and mentor of sorts, Pop, and his original name becomes a huge plot point as things develop, a name he can’t stand being known by anymore for the history it carries, same as the racial slur flung around liberally in the series.

On the subject, I cannot comment much on the racial matters addressed in the series, but I feel it’s treated with the same respect as gender in Jessica Jones, but a lot more directly. It draws on the blaxploitation origins of Luke Cage’s 1970’s origins, and uses it to address matters that are still too common, organised crime and gang warfare in predominantly minority communities; racism, the power of language, and the attitude of the law, the media, and the power of race in politics. That said it also takes a lot of opportunities to celebrate progress made in the last forty years and look back over the best of black culture.

That’s just what I’ve observed as a fan of media. I’m a white guy with no strong opinions on the matter, skin colour doesn’t effect your attitude to board games.

I’m just going to say it, I was bored. The first Daredevil series had some challenge to it, the all powerful hand of the Kingpin and his crime syndicate, Murdock’s own vulnerability. Jessica Jones was pitched against a villain with a terrifying power that put all of her loved ones in serious danger. Daredevil season 2 gave us an enemy who was everywhere, and a dangerously loose cannon in Frank Castle (whose first season will be filming sooner than expected). In each case there’s something dynamic, some great enemy to be out-thought and combated. That, and a protagonist who drew me in.

Luke Cage? Too “salt of the earth” for my taste, maybe if he’d deserved to have been in prison I’d have been less exhausted by him. His opponents were similarly straight-forward, and lacking in guile, force versus force. Even the game of public perception is far better executed in Daredevil. I know I commented on the chess metaphor, and touched on the matter of race, but did it all have to be so black and white?

That said, there’s a light at the end of the tunnel Big Spoilers The end of our story isn’t quite so bland and clean cut as the rest. When the smoke has cleared our hero doesn’t get the girl and walk off into the sunset. The name he’s worked so hard to put behind him puts him right back into the jail that transformed him, and the woman he thought he loved isn’t who he thought she was. Spoilers Over It’s a transformative experience that gives me higher hopes for the future of Luke Cage than this series earned him.

Iron Fist and the grand conclusion await, along with a few more names that have been added due to the growing popularity of the series. Let’s see what comes next.

One thought on “Review – Luke Cage”