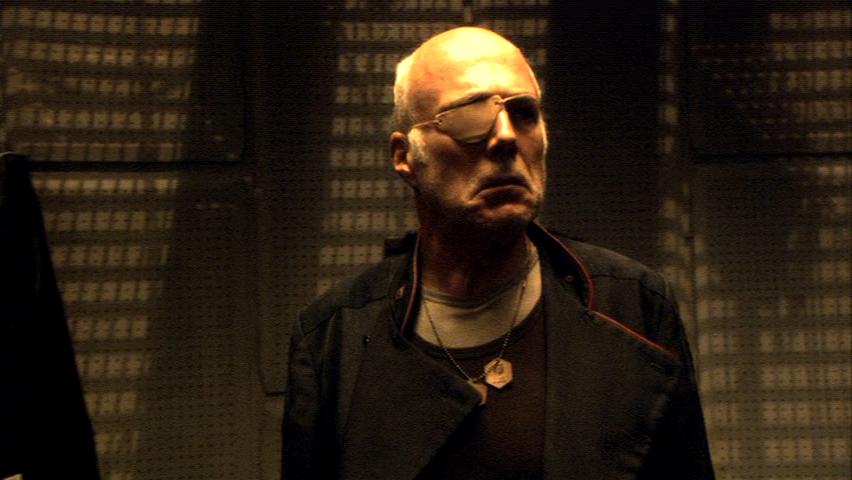 Ah yes, the simple eyepatch. It’s not always the most fashionable thing to wear, but for some people it acts as a nice aid to stop them from enduring intense pain. For others, it prevents them from remembering how they got their horrific accident in the first place. Or it just makes you a bit of an awesome looking pirate. Regardless how these characters got their patches, they deserved to make the list.

So join us as we eye-up the candidates for our Top 10 Eyepatch Wearers. These guys and girls are certainly an interesting bunch. 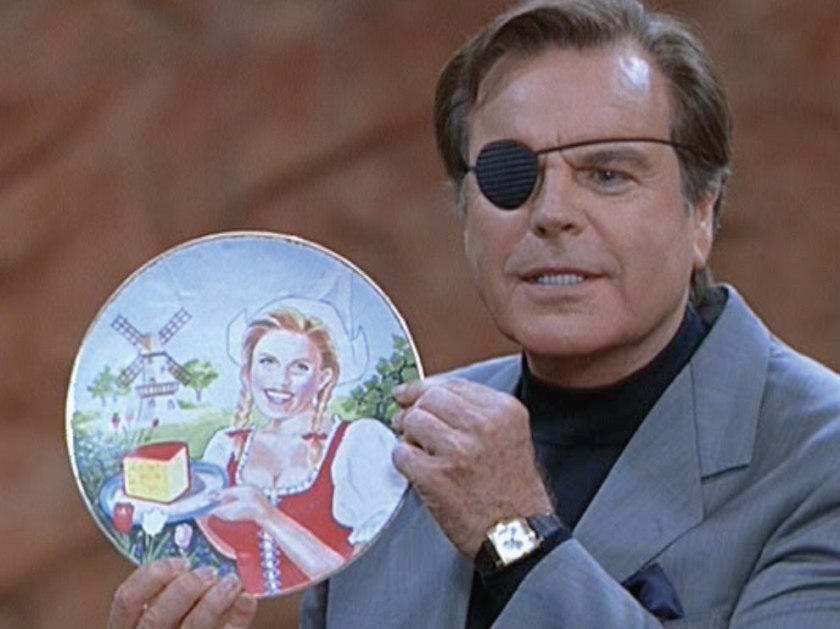 Eyepatches are a hallmark of the criminally evil, usually reserved for those in charge but it’s not uncommon for the upper echelons of henchmen to don this fancy piece of apparel.

Enter Number 2, number two to Dr. Evil’s number one, long time friend and aide. He’s a slick business-type who managed to transform Evil’s empire into a multi-national corporation with little effort, Virtucon, and got rather annoyed when Evil changed it back. In fact the eyepatch is all show, great for cheating at poker but otherwise all fashion, his covered eye works perfectly fine. 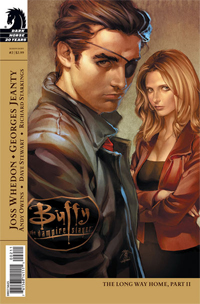 Any fan of Buffy the Vampire Slayer will be able to remember the original trio. You had Buffy, Willow and Xander. These three represented all there was to do with the original series and the comics and books around them. Out of the three of them however, Xander provided some relief… only for him to have the most tragic story.

During an intense battle with the evil Cecil, Xanders eye was gouged out. This meant he would spend the rest of his days with an eyepatch on. He’s probably not very well known for the eyepatch, but in all continuations of the story, he is depicted with one on. Ah yes, he also lost the love of his life… who was cut in half. Brutal. 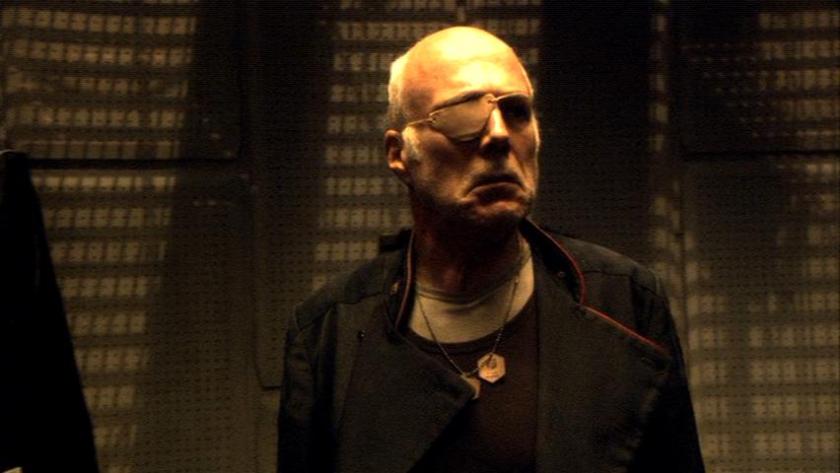 Here’s a commander who suffers the ravages of war from top to bottom. Survivor of the human extermination, he has personally overseen martial law being declared amongst the remnants of his people, helped lead them to a sanctuary that was turned into a nation of slaves, and held in a P.O.W facility and tortured for information on his rebellion. At the pinnacle of Tigh’s suffering a Cylon removes his eyeball and shows it to him, gloating. From that moment Saul is changed, harder and bitterer than the hard and bitter man he was before, what warmth there was erased, leaving only a cold and calculating man bent on exacting justice.

There’s a scene – sadly one that I’ve been unable to find – of Saul processing the loss of his eye. It’s a brief but powerful moment of him mourning the loss of his eye and testing the new limits of his own perception. It’s not his only epic moment for sure, any one of which should land him on this list somewhere but that’s really my favourite.

Kaede is an old priestess in the village she and her sister Kikyo grew up in. She was raised with a bow and arrow in hand, taking out evil demons like they were nothing. Therefore, she was very well respected by her peers and demons alike, even if she is often mistaken for a demon due to her age.

Without this grizzled old priestess by her side, Kagome would have likely met a horrible demise by titular anti-hero Inuyasha. Kaede’s distinctive style includes an eyepatch and the priestess attire, similar to what Kikyo used to wear.

Returning from our list of One-Eyed Characters, former director of S.H.I.E.L.D turned back-room puppeteer of the Avengers, and undoubtedly the most awesome person without super-powers in the MCU, all of which is definitely helped along by the addition of the eyepatch. Though Stark may mock his depth perception and the need to turn his head constantly to look at things, he may be the only living thing that could get away with such glib comments, and even Hulk might pause when facing down the good eye.

Of course the rather curious scars around the eyepatch do a lot to add to Fury’s mystery and air of hidden strength and skill; here is a man who plays “What’s this behind your ear?” and the answer is more guns. 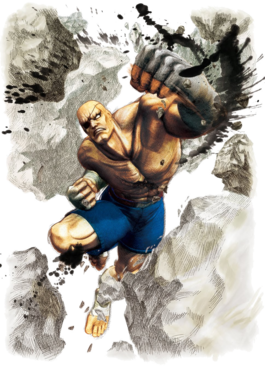 The emperor of Muay Thai, at least that’s how he’s referred to in his home country, Sagat is a Street Fighter character who has one of the longest striking ranges in the franchise. One of Ryu’s fiercest rivals, he bore a grudge against the primary protagonist after losing in Street Fighter 1, where he received a disfiguring scar on his chest.

Sagat is amongst the earliest characters from fighting game behemoth, Street Fighter. Huge, muscled and sporting a very visible eyepatch, which he wears to cover up the severely damaged eye he received from Dan Hibiki’s father. Sagat is an instantly recognisable character who has undergone a lot of development, from an unplayable boss to a fully playable character.

An entrant into our Over Powered Anime Characters list and for good reason, he was considered only briefly for the list of one eyed characters, but – much like Number 2 – there’s a fully functioning eye under that patch, so why wear it?

Kenpachi is out for one thing and one thing only, a good fight! He disadvantages himself as much as he is able to while still being able to swing a blade, bells in his hair to prevent sneaking up on an opponent, only ever one hand to hamper his impossible strength, one eye covered to screw with his vision, and while we’re at it, let’s have that eyepatch devour his energy in copious amounts so as not to overwhelm anyone too weak to fight back.

This man made Captain of the strongest squad of fighters in the army of Death Gods (Shinigami) without ever using the full power he possesses, even he doesn’t know his limits! Tearing off that demonic eyepatch just shows you’re starting to get his attention.

Add this to the to do list, especially as a newly born John Carpenter fan. I have never seen Escape from New York, or the sequel Escape from L.A. Bob Plissken lost his eye during the Leningrad Ruse in World War III in which he also lost his parents. He’s the original Suicide Squad, with explosives placed into his carotid arteries to conduct a solo mission to rescue the president from Manhattan, now the New York Maximum-Security Prison where Snake is incarcerated.

Played by Kurt Russel in both films, and only ever depicted as Russel in comics and similar projects, fans have already shut down plans for lacklustre remakes featuring anyone not up to the task. He has a bitter attitude and a mullet to complete the cliche’d 80’s action hero look that ultimately inspired our next entry…

With one of gamings most convoluted story lines in history, Metal Gear Solid is a franchise that all gamers recognise. From the iconic suit that Snake wears, to the short hair and bandana, Solid Snake epitomises all that is cool. Along with his style, he sports an eyepatch.

Now, it’s not exactly a huge part about Snake, but unless we delve into the world of pirates more we’re hard pressed to find a more well known eyepatch wearer (Of which, we didn’t consider anything from Pirates of the Caribbean, due to the lack of main character who dons the patch). However, there could only be one eyepatch wearer that stands much higher than everyone else… even if he is small.

We all remember his theme tune and even if you don’t, you really should do. Danger Mouse was a staple of kids cartoons in the 80’s through to the early 90’s. With his sidekick mole Penfold, Danger Mouse was a spy mouse who had an eye patch, an awesome theme tune, gadgets galore and spawned the highly amusing Count Duckula spin-off series.

In a typical episode of Danger Mouse, our titular character would have to save Penfold. But, with an incredibly simple and recognisable character design, featuring a white mouse, a simple patch with his logo, a belt and his all important eye patch. It didn’t serve any function other to look cool, but this made him a highly recognisable character in childrens cartoon in the 80’s, 90’s and now a reboot started up from 2015.

Ah, did you see what we did there? We picked the most lovable, child friendly Danger Mouse as our number one pick. Hopefully you don’t feel ratty about that choice, but hey, here are two more who we didn’t quite see eye-and-eye to eye-and-eye with. Because they’re hiding one of them…

Ragetti – Pirates of the Caribean

Trust us on this one – You know of this guy, although you might not have known his name. He’s one of the recurring baddies, then goodies, then… You know what? He kind of has his own alignment: Wherever his friend and uncle, Pintel, takes him. He’s been under both Captain Barbosa’s and Captain Jack Sparrow’s command. He’s rather dull, rather dumb, but all in all, we love seeing him on our screen.

He doesn’t quite make the list, because he’s not exactly a pivotal character of any kind. He has no real defining moments, except for a few distractions and some dialogue. Due to the low intellect of the duo, he’s used in often silly situations, such as having a fork in his eye and dressing up as a fair maiden. He’s not below being as sly as he can – but he’s not quite Top 10 material. Still, we love seeing Ragetti – so here’s hoping he’s back in the upcoming new Pirates of the Caribbean title?

Busted into the honourable mentions because this is an eyepiece, not an eyepatch, as characterised by the lens that he can see through that’s uncommon for eyepatches. As the world’s most skilled marksman it’s no shock that he’d wear a scope almost constantly, and his has a few little personal tweeks that accommodate for his particular skills.

If you’ve played Arkham City you may recall an instance in which you have to trace Deadshot’s kills, including a man he could never have seen directly, that he hit with a perfectly angled ricochet off a garage door from about half a mile away. That’s not all the eyepiece, that’s pure skill, but apart from being a useful little addition to Lawton’s kit, it’s also his trademark.

Cover up, lads – This Top 10 is over. We’ve had a good look at those who are half-blind, those who are basically one-eyed monsters and those who just look plain good with an eye patch. They’re not exactly a conventional fashion accessory to have, but hey, these guys and girls make it work. Next week will be our Halloween Special, so pick wisely.

What did you think of our Top 10 for this week? Did you enjoy the range of characters, or do you think we were a bit short-sighted with this lot? Do you agree with Hook making the list over Blackbeard, or do you think we should have had King Bradley from Fullmetal Alchemist make the list? As always, leave your comments below, or over on Facebook, Twitter or Reddit.