The issue with presenting players with a full selection box of choices is that it can often leave them paralysed at the metaphorical crossroads without a clue how to proceed. We’ve all experienced that feeling, like staring at a menu with perhaps a half dozen things you’d love to eat and you don’t want to pick one for fear you’d miss out on another, even though you know you can always come back.

Games can present us with choices that present us with more ways to play, more things to experience with every playthrough, but can also hobble our efforts to play and enjoy a game that we should love. Some examples of too much choice:

I for one look at people who claim to play the storyline in an Elderscrolls game with complete disbelief. Who plays the story? Seriously?

Within moments of starting an Elder Scrolls, or a Fallout game you’re presented with so many new quests and options, and every person you speak to presents you with some new quest to pursue, decision to make, a god, a faction, or an item to chase. It doesn’t take too long for the main quest to get lost under a heap of more interesting things.

Character building also takes you on one hell of a journey, half an hour to get the face just right, what skills to train, which perks to take, there aren’t many RPGs that give you that much freedom, even in a sandbox. It creates a great deal of replay value, and makes it worth the effort of starting a new character in Skyrim’s remastered edition as many of us are still discovering things in the game five years later.

It makes for a great game, but one that most people may never “finish” in a lifetime. I loved Morrowind, but I don’t recall getting through more than a few quests. I knew every inch of Vivic but couldn’t tell you a thing about the east coast, and I’m left with a game series I’ll never finish.

As a huge fan of the series I fully expected to love the Pre-Sequel, even expected to add it to the very short list of games I have completed (very short). As a game that prides itself on how many guns it offers for players to choose from, choice is very much a key facet, but it was also it’s biggest downfall. 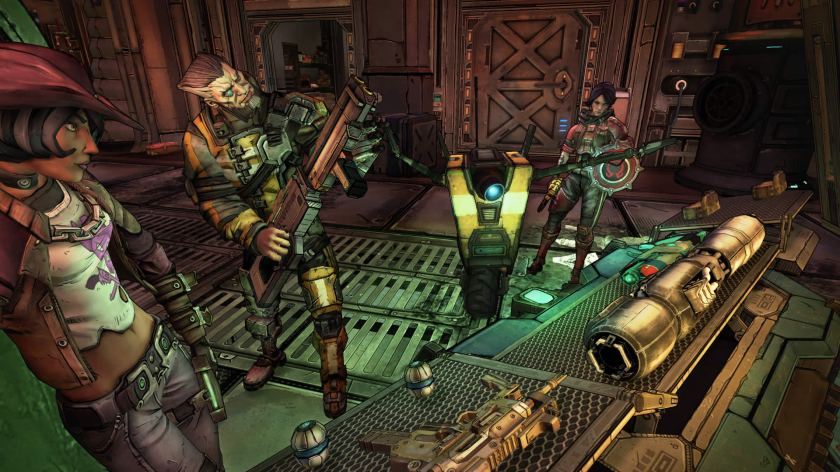 Quest density prevented me from pursuing the game further than the first few hours of gameplay. In each area of Elpis the player is presented with a bombardment of quests to choose from, or to just plough on with the main story, leaving you with an overflowing quest log. And to be completely honest, not all of those quests are going to be to everyone’s tastes, races, fetch quests, timed quests, and while no one is demanding you do every single quest, if you’re the kind of person who likes to complete as much as possible before moving on it gets rather dull.

The game has a fairly linear progression, each step in the story takes you into some new area hitherto locked to you. Unlike Skyrim that allows for complete free roam and a new vista over every mountain, you’re wandering around and around the same limited scenery for hours repeating the same fights just to tick a box.

And here’s where I get to the title that brought me to the idea.

Dishonored generally offers you a series of choices between one option or another: father or daughter, dead or alive, stealth or slaughter, order or chaos. Nice and simple, and once you’ve settled into a play style then your choices become fairly simple, right?

In between each critical decision there are countless smaller ones. In the streets between there are no limits on paths to choose from, rooms to explore, and each situation has so many different approaches it can be impossible to see which is best for whichever style you’re pursuing, especially when you start adding up all of the powers and items you gather as the game progresses. Of course, in order to pursue all of the various collectables and loot you need to hunt through every single corner.

All of these options can slow down your progress, and while that’s not so pressing in a game where patience and stillness are often the best courses of action, it’s time that would be better spent observing your targets and working on your timing rather than sampling every possible approach to see which is your best option.

This is the 21st century curse, we are over burdened with options and choices, to the extent where it can be paralysing. It’s not a phenomena limited to games, this is a well documented psychological paradox, one that we have to look to in design. It’s not merely the volume of choice we offer but how densely they’re packed together, and to what extent we may suffer for choosing one option over another.

To you then, what games did you find had too much choice? What games got it right? And who are the worst offenders for railroading?

4 thoughts on “Limitations of Choice”