Last week I discussed the alien races of Babylon 5, similarities and differences and how we’re not all that great at coming up with wholly alien life forms. Everything we create has some irrevocable grounding in what we are and what we know, and while a lot of that has a solid basis in evolutionary biology we’re still missing a little imagination at times.

There were a few races I noticeably omitted in the last in this series that stalwart fans may have wondered about (I know there’s a few die-hards reading), The First Ones. Humans are not the first to set foot among the stars, far from it. The Centauri found us first, the Minbari are the most advanced of the spacefaring species, except for the handful who came before. Creatures of legend, actual legends given shape.

Vorlons are seen first, only as hulking encounter suits at first, effectively space suits that contain a stable atmosphere and ideal conditions for the organism inside. They speak in riddles and cryptic metaphors, seemingly in an effort to make us reach our own conclusions, find the right answers alone with as little help as possible, but when we are at our strongest they push us the hardest, to discover who we are. 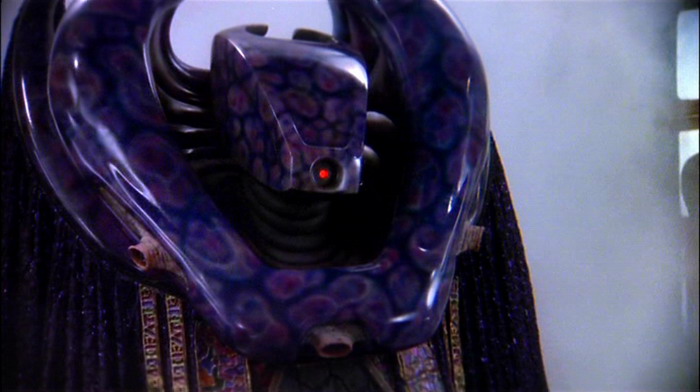 Beneath all of the machinery is a photoform creature, a being of light and energy who’s assumed shape is a blob of white light with lobes resembling a flowing robe and a pair of wings. Because of the incredible psychic output they cannot help but plug directly into the minds of those that surround them, and adopt a resemblance that makes them feel comfortable. The Vorlon ambassador Kosh says:

“Being seen by so many at once was a great strain.”

The Vorlons have implanted our minds for years with the image of them as divine entities, and so for many to see them at once they have to project the image of the perfect being, the face of god. They are the origins of many of our myths and legends, and have lifted people from dozens of races to elevate them to heroic status, helping guide their populous to the path of righteousness and justice… as they perceive it.

In Babylon 5 they function as overbearing parents. They’ve interfered with our lives heavily, influencing our culture, at times our genetics, and when we present them with an intelligible idea that disagrees with their view of how we ought to be they dismiss us as children rather than arguing back coherently.

What Do You Want?

Shadows as they are more commonly known go by a few names. A Narn prophet named them “The Great Enemy”, but there’s no questioning the resemblance; if Vorlons are angels then the shadows – with their shifting black skins, jagged and insectile appendages and glowing eyes – are demons.

Where Vorlons approach with subtlety and infuriating riddles, the Shadows work through agents, never acting directly unless the application of raw power is required. A friendly face comes baring gifts and asking little innocuous things in return, they only seek to help and lend their strength to those who need it most and who might be able to help them in return. But of course any deal made with devils comes with ironic twists, we can have whatever we want, but we must pay a price.

Ultimately the goal of the Shadows is conflict, and their every action drives the younger races to frenzy by pitching them against one another first before descending with wrathful fire. Despite the awesome destructive capability of their spider-like warships the Shadows are made vulnerable by their limited numbers and the interference of the Vorlons, so they are forced into hiding behind their puppet/allies while utilising guerrilla tactics in every confrontation until everyone who might turn against them are occupied with one another, allowing them to deliver a devastating final blow.

It’s a portrait of villainy. And yet they claim that all they wish to do is see us all grow stronger, to achieve our full potential by testing us to our very limits and allowing the survivors to grow and flourish. Ahh, why is evolution always the bad guy?

Why Are You Here?

Here be spoilers for those of you already engaged.

The Shadow War ends with the united lesser races kicking the last of the First Ones out of the galaxy, shrugging off parental oppression and standing alone in the darkness. We’re given something of a hand up in that regard in the form of Lorien – The First One – acting as the role of revelation, insight, and in many ways a grandparent. He offers true wisdom, care, and love for all who came after him. In the narratives that follow we see more prominent figures taking up authoritative mantles, Sheridan’s cunning use of denial and subterfuge to inspire the other races to act in their own best interest, Delenn chastising her entire people like disobedient children, and employing an enemy to help her do it.

So what do we learn from this?

Babylon 5’s main lesson is the impact of our parents upon our lives, and the power of authority over us. I’ll explore authority later, but let us look at how our squabbling parents change their children for the better, and the worse.

It is seeing them as mortal, as flawed, that makes us stronger. In the end we start to regard them as squabbling children, playing us like pawns in their own juvenile argument over how life should be lead. Through this revelation we step out of their shadow and stand on our own metaphorical feet, but the lessons of the Vorlons and the Shadows stay with us, make us work together and understand one another, but stay strong and strike without hesitation when we understand what we are striking against.

And yet a legacy stays behind like the flaws of our parents, irrevocable changes made to our bodies, minds, genetics, histories, and in their absence a gaping void, with no power to turn to for help when needed. In this case those are made a little more blatant: allies of the Shadows seeking to continue the conflict, and struggle their way to the top of the pile; the constant interference of the Vorlons leaving us with a breed of telepaths who grow increasingly dangerous.

The religious comparison is easy enough to make, the war between good and evil, angels and demons, but in the end neither wins. We step from beneath the oppressive gaze of our elders and become the elders ourselves, at the end of season four, literally so.

As a side note, there is a scene where Captain Sheridan berates the resident Vorlon, Ambassador Kosh, into making a stand against the Shadows instead of cowering behind cryptic excuses like “Now is not the time.” He asks Kosh the question that is the hallmark of the Shadows, “What do you want?” and Kosh lashes out with his full power, but just before that he also asks the Vorlon question, “Who are you?”.

Massive credit to the actor and puppeteers behind the encounter suit, Kosh can only express physically through the aperture of his eye, tilt of his head and sway of his massive shoulders, the guy underneath has a lot of work to do, but Kosh actually looks embarrassed, almost cowed by Sheridan’s admonishment.

4 thoughts on “Babylon 5 In Depth – Angels and Demons”