I’ve heard a few things about Murder Mysteries that didn’t have me completely sold on the notion, and while I’m aware that quality varies from group to group, when a friend of mine laid out her plans for her own mystery evening it took very little effort on her part to convince me to join in. Honestly I was sold before she was done talking:

A mixed group of actors and role-players are plunged into 1920’s London, given an in-depth character, complete with history, motivations, a full account of the evening of the murder, and a deep dark secret that could throw suspicion upon you, and give you a reason to have desired the death of author Anthony Body. My character was Benedict Andrews, publisher and consultant with no love of Anthony’s drinking habit, but more frustrated by the blackmail. Benedict has been taking the transcripts of aspiring authors and publishing them under his own pseudonym, and Anthony found out. 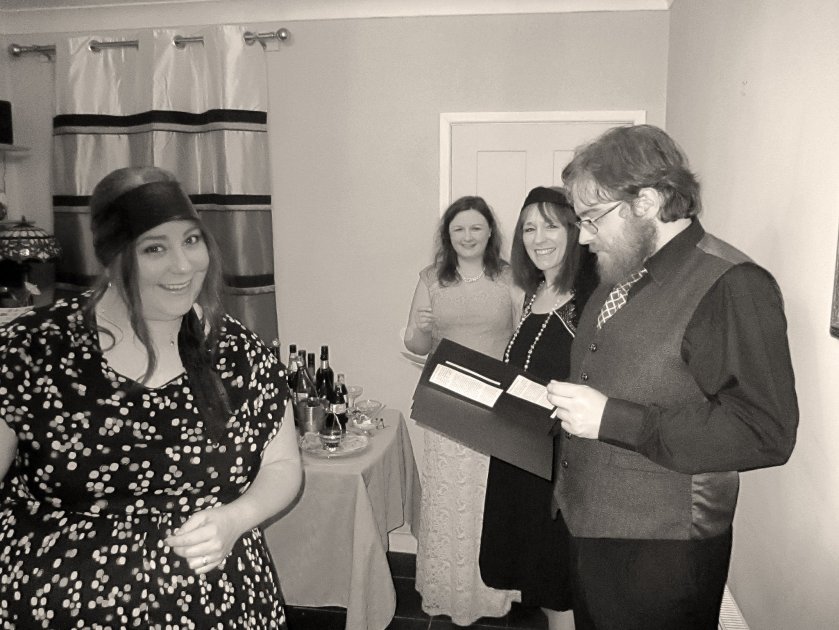 The account of the evening left me with a few certainties, first of which being poison in the victims whiskey as he was the only one who’d drunk from that bottle all evening, and the second being that the young girl who’d been the last to see him alive couldn’t have been the killer, both too obvious and not so easy to poison someone that quickly. I was left with three possibilities with strong motives, but by halfway through the evening I was convinced my three prime suspects were innocent, and replaced by three new ones, of which I was one!

Long story short – and this was a long story – we were presented with one hell of a story and we got to live it. Arguably this was my first ever LARP experience, bedecked as best as I could be on a shoestring budget, mercifully I have plenty of waistcoats and a bowler hat leaving me with very little to add to the outfit of a 1920’s style businessman. I have a little nervous habit that I exaggerated massively to emphasise my concern about being invited to a dine with a killer, a tendency to adjust sleeves and brush away dog hairs turned to my advantage.

Our writer also left us with homework, a little digging into history for some factual content to lend to our historical characters. I dabbled a little into Benedict’s time in the Great War, settling on a place to be stationed, a couple of little war stories and enough to fuel some ad-libbed moments, but I found I was digging deeper into literary history, if only so that I could accuse our hostess of reading a little too much of that “ghastly Agatha Christie woman” or “strapping on a dear-stalker and fancying herself the sleuth.”

What I found particularly fascinating was the reaction of all assembled after the conclusion had been reached and the dramatic reveal taking a turn for the sideways. Of the assembled friends and guests there was a fairly even divide between the actors and the gamers. The actors were most vocal that our host should turn her work into a play – a fair call because there were well developed characters, secrets and twists galore, a story that all assembled found compelling. I – and a few others – instead suggested publishing it as a playable game, granted a game that can only really be played once, but no less enjoyable for it. And I’m informed that another is in the works.

For a first experience there was a lot to enjoy, and some interesting thinking points to build upon for games in the future.

I’ll put it to you then, what are your experiences with murder mysteries? Join us in the conversation down in the comments section, or on our Facebook page.