Ever feel like you’re living in a video game? Well Lord Momonga certainly does; a powerful lich who has been trapped in a virtual world, with no-one around except for NPCs who have come to life, he wants to get to the bottom of why he’s stuck in this world. From level and HUD interface questions and dungeons & dragons dynamics, Overlord is a wonderful telling of the trapped-in video game subgenre of anime. Does this series have a life of its own, or does it fall flat next to more established anime of its kind?

Ever feel like you’re living in a video game? Well Lord Momonga certainly does; a powerful lich who has been trapped in a virtual world, with no-one around except for NPCs who have come to life; He just wants to get to the bottom of why he’s stuck in this world. From level differences and HUD interface features, along with dungeons & dragons dynamics, Overlord is a wonderful telling of the trapped-in video game subgenre of anime. Does this series have a life of its own, or does it fall flat next to more established anime of its kind?

Overlord is an MMO Fantasy adventure, about a regular man who leads a well established guild on an MMORPG called Yggdrasil, follows in the footsteps of the player character’s large skeletal lich. The lich, known as Lord Momonga, is a max levelled player and he decided to stay as Yggdrasil shut down it’s servers on their last day. As time progressed, Momonga realised that the servers didn’t shut off, but instead, he was stuck inside of the game. With no way to use the in game commands or console and with NPCs seemingly coming to life, Momonga sets out to make a name for himself, crafting a new identity under the guise of Ainz Ooal Gown and learn about the world he’s trapped in. With a small group of NPCs who stay by his side, the unsightly lich learns to conceal his apperance for the sake of diplomatic gains and how to deal with the people of this new world he’s found himself in.

The Overlord artwork is absolutely fantastic; with beautifully drawn scenes, including the rather strange art-direction of the protagonist, considering he’s a lich. The moment I set my eyes on him, I was immediately thinking “he looks like a lich” and lo and behold, he was. The nicest thing is a lot of the classes and races of the series look as they should do. Considering this anime is set in a very Dungeons & Dragons inspired world, it’s no real surprise then that the art of each character, along with their classes, was hugely important. 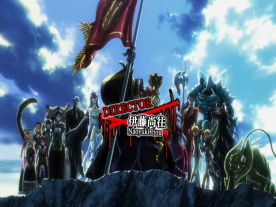 Ah yes, Herohero is a brilliant (but rather un-explored) character 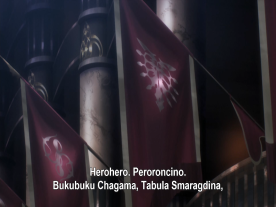 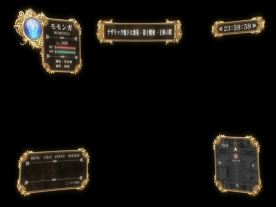 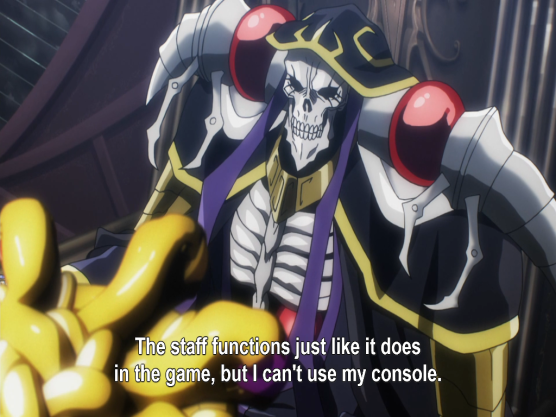 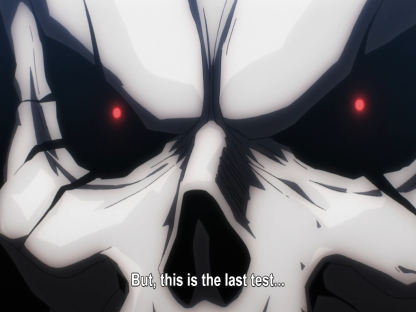 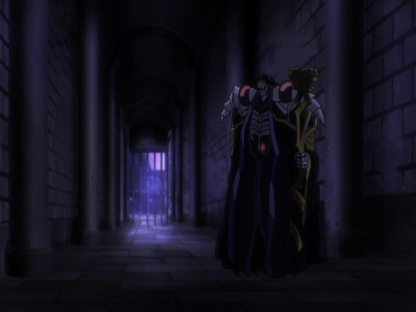 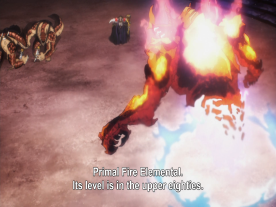 Aura and Mare Fiore are gender-bent elves. They’re in their 70s! 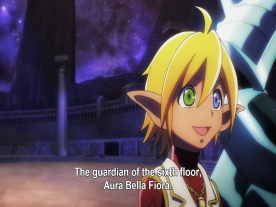 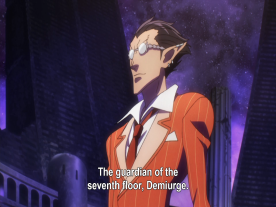 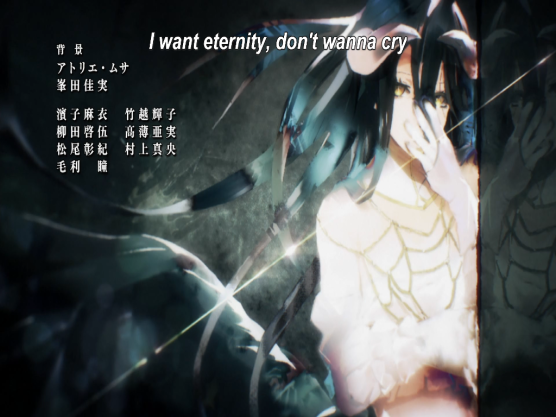 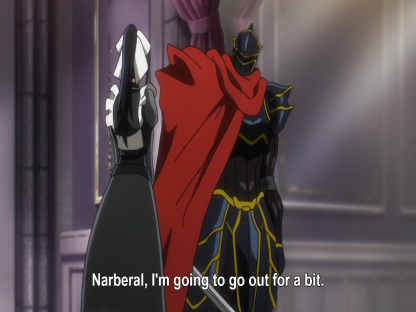 Skeletor would be proud of this face!

One thing I’d like to commend it on, is something I normally knock other series down for. In the past, I’ve raised issue with animes such as Anime de Training, which uses the allure of a cute anime girl to get, let’s be honest here, horny people to watch it. Whilst I find it strange that the credits are seemingly dedicated to Albedo, who is also the major fanservice character of the show, there never seems to be a moment where that fanservice over-steps its boundaries. It feels like the character is just comfortable with telling Ainz about how she feels, which is entirely because of an action he does in the first episode. It’s a clever narrative, which actually for once compliments the character, rather than detracts from the show. It also creates a rather interesting rivalry between two of the characters.

Let me start off by saying that this intro is amazing and I think I’d like a full album of this style of music? Where can I buy this?

But in seriousness, the music of the show is really good. It’s enjoyable and catchy, making you really feel pumped up for the episode ahead. As is customary with anime, there’s always a small snippet before showing you what happened leading to this episode, before the intro starts. The music is really quite fast paced and it’s got an eclectic beat to it, which really gets you into the mood of the anime. It might be a little bit unfitting of the pace of the series, however like all good anime music, the opening makes a huge difference and I’m always finding myself ready for an episode once the intro is over.

In terms of the voices, I want to focus primarily on Ainz himself. You see, he has two voices – His actual voice, which is a pleasant sounding, nice and intelligent sounding man. This is because the real world version of him is effectively a hard working employee. However, his second voice is his Ainz voice, which is a lot more deeper and booming by contrast. He puts this voice on to give an aura of power over his NPC companions. This distinction is important, as it makes him stand out between the sides of his character, which slowly but surely changes throughout the anime anyway. He goes from this kind and calculating man, to a fully fledged leader bent on conquering the world he’s in. This is what I wanted Sword Art Online to be; but this isn’t quite the best in it’s genre. It’s the same premise – People played a game, suddenly trapped in the game, if you die then you’re actually dead, etc – We’ve heard this sthick before! Overlord fails to quite grasp that brass that was set so high by Log Horizon, but it does something that I haven’t really seen in another anime. It gives you a character who is right at the top of the game, literally, who then has to learn from the world he’s actually trapped in. He’s still all powerful; in fact he’s ridiculously so. What he isn’t, however, is infallable. He learns to lose his humanity and become this embodiment of his lich form. It’s pretty powerful and it’s well worth a watch… And all of season one is on Crunchyroll for free. Season two is on it’s way, so now’s the time to watch Overlord. You really can’t argue with that kind of logic now can you? As always though, let us know what you think in the comments below, or over on Facebook, Twitter or Reddit.