I found out about #UrbanHeroes from a mail out that hit my inbox just before we went to UKGE. Tin Hat games were promoting their board game called Dungeon Digger and I went digging into their history and found out about this super hero based RPG. The last RPG I looked at was Pugmire, which was not a full review, but rather an introductory look. By contrast, this article is a more in-depth look at the #UrbanHeroes RPG, what I am aiming for here is an overall view of the book. How I feel about it as a person who has played a fair bit of D&D. I aim to introduce you to the “world” so to speak and give an opinion of what I think a game might be like. 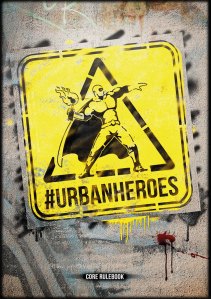 I found out about #UrbanHeroes from an email that hit my inbox, just before we went to UKGE. Tin Hat Games were promoting their new board game called Dungeon Digger, so I went digging into their history and found out about this superhero based RPG. The last RPG I looked at was Pugmire, which was not a full review, but rather an introductory look. By contrast, this article is a more in-depth look at the #UrbanHeroes RPG; All that I am aiming for here is an overview of the book, and how I feel about it as a person who has played a fair bit of D&D. I aim to introduce you to the “world” so to speak and give an opinion of what I think a game of it might be like.

#UrbanHeroes is set on Earth-Z, an accelerated and dystopian version of our planet. When reading through the history of this alternate Earth you’ll find it very closely tied into ours. H.E.R.O.es (Human Exposed to Radioactive Operations), Z-active creatures or even extreme terrorist groups become responsible for some of the tragedies that have happened in the world.

It all goes wrong when the Large Hadron Collider is switched on in September 2008 that explodes for an unknown reason. Geneva is decimated by the explosion and contaminates the majority of Switzerland and parts of Europe. The explosion is believed to be to blame for the creation of superhumans, and within days of the original catastrophe, the first sights of humans flying are reported over the Swiss skies. Within a month, science has discovered the Z Particle and form a thesis about the potential of it. In January 2009 President Barack Obama introduces the world to the Amazing Men of America (AMA) a task force made of superhumans.

In December 2009, the AMA encounter a hugely destructive Z-active monster in the Canadian Arctic Rocky Mountains, who will become known as “Phenotype ZERO”, or just “ZERO” for short. In early 2010, we get the first major appearance of an extreme environmentalist group known as I.M.M.E.R (International Movement for Mass Evolution and Renewal), who then claim to be the cause of the Icelandic volcano eruption, as a show of power as to what influence they have over the environment.

I really like what creators Alessandro Rivaroli, Matteo Botti and Manuel Strali have done with the history. I equally both love and hate that within two years of the disaster happening, the media had started to cash in on the world of H.E.R.O.es with their reality show, Power Shore (think Jersey/Geordie Shore with superhumans). It’s actually believable that even after such a disaster like that people would enjoy that kind of vapid reality TV. But I’m not here to rant at you about all the ways that I hate reality TV.

#UrbanHeroes has a different dice system than something like D&D. With a majority of RPG’s you will roll your stats but with this system, you are given a D6 dice as a base for all your main characteristics, to begin with, these consist of the following five areas.

When you begin to build your character, the background that they go through and the skills that they acquire might increase or decrease your characteristic, and therefore change the dice you use for checks involving that statistic. If you decrease a characteristic from a D6 you would go down to a D4, or alternatively you can increase up to a D8. These stats are used to check for success on skills that you might want to use during the game. The Scriptwriter sets the difficulty of the task that range from an automatic success with a difficulty of 1, all the up to and above 9 which might be almost impossible, this is also adjusted by the length of time that the task may take.

The dice system will take a bit of getting used to, if all you know is the D20 style that D&D uses. Go and take a look at the Cortex System, as it’s very similar. The book itself is well laid out, and the PDF version of the book has some useful links in it, but could certainly have more when it references other parts of the book. I’d love to be able to make some bookmarks on the PDF version but it is password protected so I’m not able to make more bookmarks. The digital version of the book does have the odd translation error, but they are quite minimal and don’t ruin reading. I saw the full hardback version of the book at UKGE and it was beautifully presented and of a superb quality stock, but I don’t know if it has the same translation errors. Maybe when I have space for a bookshelf I will invest in a copy of it and let you guys know.

The artwork certainly gets your imagination flowing and gets you more involved in the world; it’s helpful that the website also has images that might help you out. I really like the case files that are scattered throughout that break up the very information heavy book, but it’s a rule book – and it helps tell the story of what happened. The rule book itself costs 19.99 USD (approx 16.00 GBP) for the PDF version and 65.00 USD (approx 52.00 GBP ), excluding postage, for the hardback version so it’s a fair amount to shell out. As much as I like physical books, to me, it’s just a little too much to ask for if you add postage as well.

We would like to thank the team at Tin Hat Games for discounting our PDF copy for review. We hope they have already had a fair amount of success with the book and have more success with their Dungeon Digger game. To find out more about the game you can visit the #UrbanHeroes website or the #UrbanHeroes Facebook group. The guys at Tin Hat are really friendly so don’t hesitate to approach them. We do intend to do a second piece on the book by rolling up some characters, giving them a basic back story and then tell you more about how the rules and character generation helped us create our H.E.R.O. Does this sound like a kind of RPG that you could get into? Do you have any suggestions for us for when we roll up our characters? Any particular traits you might like to suggest for us to work in? Get in touch with us via the comments section or over the usual channels of Facebook, Twitter and Reddit.