Kitacon Quest was a blast; from excellent panels to great friends – and oh so much to drink! But still, as always, we didn’t go there just to have a good time. We wanted to make sure you guys all got to see something great from the event – With the tickets selling out so fast, I thought I’d focus on the things I enjoyed the most out of the event. Brace yourselves, because this is going to be another big post; as well as two videos!

Kitacon Quest was a blast; from excellent panels to great friends – and oh so much to drink! But still, as always, we didn’t go there just to have a good time. We wanted to make sure you guys all got to see something great from the event – With the tickets selling out so fast, I thought I’d focus on the things I enjoyed the most out of the event. Brace yourselves, because this is going to be another big post; as well as two videos! 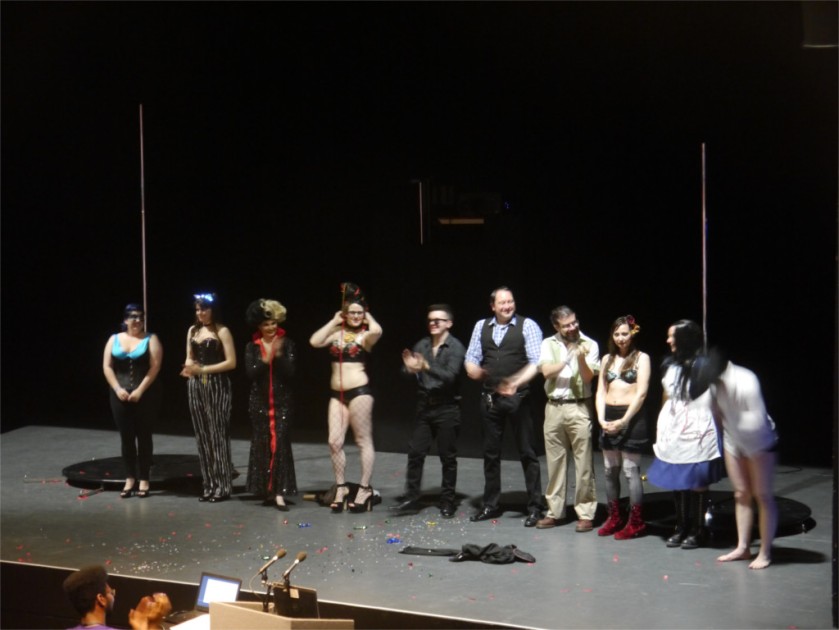 First of all, let me just say how much fun the Cabaret was. It was mostly made up of burlesque and pole dancing, with some singing thrown in for good measure. There was an act for most people who came along though, because once Cruella De Vil came on stage, we knew we were going to be in for a heck of a strange performance – and boy oh boy, were we right? Much like Joel’s post about this, I seriously enjoyed the show. Huge congratulations to this panel too, as it raised just over a whopping £400 for charity (To quote the Closing Ceremony, “There were more £20 notes than coins”)! Great work to Tab, who always puts on an exceptional performance for the audience.

There was one panel both Jake and I were looking forward to; in fact it was the only panel Jake really wanted to see, bar for Joel’s and Sarah’s (we’ll get onto that shortly). That panel was the League of Legends (LoL) panel on the Saturday. We were looking forward to hearing from a LoL player about what it’s like playing in 2017, as Jake is an avid LoL player himself. Unfortunately, after 20 minutes of us waiting there, a member of Kitacon staff had to come running up to us to tell us the panel had now been closed off. Whilst disappointing, we took this opportunity to go and catch up with Kim and Pete from Later Levels. Go share your love by reading about a panel that, unfortunately, disappointed them.

But, before you do that, please remember: People spend a lot of time making these panels. Sometimes, a message can’t reasonate with you – Or, in the case of this cancelled panel, something could have cropped up. Don’t forget: A convention panel is usually run by a fan, a member of the community. They don’t get paid for being there – They often get nothing for their time, except that warm fuzzy feeling. They run a panel as they want to give back to their communities, so whilst we are all entitled to our opinions on these matters, we have to remember that these are not professionals.

Joel’s second panel and boy oh boy, the entire room was packed and were loud for him! You can read his views on his panel here, but as someone who was holding a camera for half an hour, I can honestly say I was proud of him. Unfortunately, the second half of the panel was recorded separately and it was entirely Q&A. Click the above to see the panel in all of its glory and later down the line, we’ll upload a spliced together Q&A section along with the main panel itself. The full video won’t appear on our official YouTube page until I’ve sorted out the second half, which will be some time next week. We’ll make sure to put out a post about this, so that way you don’t miss anything!

Jewelery Making For Your Costumes

Our good friend Sarah took to the front of a room, with so much preparation for the jewelery class she was about to deliver. It really, really showed as you can see in the above images, as to how good preparation makes a panel more interesting. Wanna see the panel in all of its glory? Then join us on Tuesday, as we’ll be showing off the full video, along with the full video of Joel’s DMing 101 panel!

One thing I will say is that this isn’t a topic I’d normally go to, however we went along originally because it’s a friend – But also because I knew we could definitely learn something from this. And boy oh boy, it was one of the most interesting panels outside of my “typical comfort zone” in a long time. I can’t wait to show you guys the full video next week!

There were many more panels on at this years Kitacon – and if you’re even somewhat curious about what events went down, check them out from the official Kitacon Events Guide!

I didn’t go to see this, even though I put my quiet and totally secret entry in. I didn’t win any prizes, I wasn’t in the top 3, but hey – The quality of the winning entries were excellent! They truly were. I’m not going to be another AMV, as now that I’ve made one – I feel like I’ve achieved something I wouldn’t have dreamed of achieving. I’m happy enough with how it turned out, even if I did reuse some bits a bit too often. One kind person even put a comment up on the Kitacon Facebook group, saying about how my one was pretty cool to watch, so hey – I made one person at least nod once!

There’s a reason that Kitacon is known as the party convention; it’s because they know how to throw a bloody good party… Although, I kind of have one criticism of one of the nights parties! See, whilst the rave night was all well and good and the Saturday’s rock night was truly excellent, the Sunday’s cheese night wasn’t that cheesy! I mean, it started incredibly strong, including a suggestion Jake put in for the Time Warp. People were dancing and cheesing it up – And then suddenly it changed into rave music? We were somewhat baffled by this choice, as the music just wasn’t right for a cheese fest. It meant we ended up getting back to our hotel room and catching the tail end of SummerSlam where oh my god people were defeated– Oh wait, wrong article for this.

Still, this doesn’t take away from the amazing work they put in behind the parties! As you can see from the image above, there were plenty of people getting in there on the rock night and indeed the Friday and Sunday nights, too! I think I’m becoming one of those old people who sniffle at the mere suggestion of doing a dance!

Was this the best dealers room yet? Well it almost was – Except it was missing Magic: the Gathering booster packs! But in seriousness, I loved going around this years Dealers room. Above you can see a short clip of me going up just one strip of the dealers hall in GIF format!

This year, we came back with a whole DVD set for Soul Eater, which I intend to watch with Jake. We also came back with a set of Inuyasha Playing Cards (I’ll show this in Sunday’s article) and we also got 3 Pop! Vinyls (2 courtesy of Joel), 1 League of Legends mini-figure (Jinx), pocky, panda sweets in strawberry (Yum!) and 2 t-shirts… I’ll… Have to show you guys those t-shirts on Sunday’s article as well. 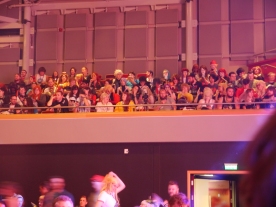 So I went to three main stage bits – We went to the opening ceremony, of course – The cosplay Masquerade (if you’ve somehow missed it, then please do click here), and finally the Closing Ceremony on the Sunday (Apologies Kita’s Got Talent people!) Admittedly, I did sit back quite often, rather than going right to the front, like I could have with my Press Pass. I mostly got the pass so that I could record some bits and bobs, then to be allowed to show all of you wonderful geeks out there. The Opening Ceremony went down really rather well, if not standard affair. There were safety dinosaurs however! As I mentioned above, I’ve already put up an article with all of the images we snapped up from the Cosplay Masquerade, then there’s the Sunday’s Closing Ceremony.

I’m not gonna lie, Iain had been working flat out ever since I had first met the guy back in 2014. We’re a small part of the community, really, so we’ve never interacted much. I’ve sat in the front rows and taken pictures of the guy (Hey, don’t worry, it’s not as dodgy as it sounds), I’ve attended the opening and closing ceremonies each and every year – So to see him go was a terribly sad moment. However, he graced us with his presence the whole way through the Closing Ceremony, including during the charity auction. I admit: I got scared guys. I hid my camera as soon as the bidding started, because hells no, I am not making it look like I’m bidding. But look at the sea of people! Again, this video will only appear here on this article.

Of course, Joel then had to go ahead and bid for a big item! Well done you, crafty, crazy man.

Overall, Kitacon was awesome as always. I will echo the sentiment about a quiet space for games, however one thing I will say is that the main party we stayed for was the rock night – It was excellent! Also, this years Kitacon has shown me just how out of shape I am, from travelling back and forth between our hotel and the convention grounds. It wasn’t too far, probably about a 10-15 minute walk and nothing more, but constantly going back and forth was terrible for my leg! Therefore, it’s from next week that I begin getting back into shape. Perhaps I’ll blog about that along the way? But now it’s time for you to have your say – I hope you enjoyed my review, along with some of the footage I got and the images! We’ll have a final piece on Sunday, including more photos, so please do check back for our last major post covering Kitacon Quest 2017! Let us know your thoughts as ever in the comments below, or over on Facebook or Twitter.