I was both curious and anxious when I read that there was a Doctor Who RPG. The child inside of me was gleeful that people had put the Doctor Who universe into a form that can be played by many and then the adult in me grew very cynical indeed. I wondered how they would deal with the Doctor as a character, will this be played by a player or is the Doctor like a super cool NPC. 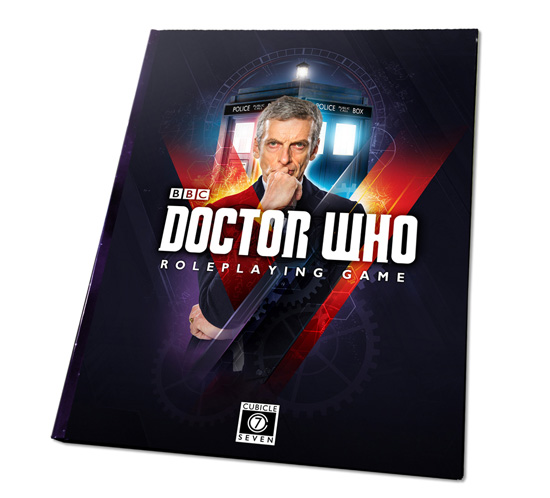 I admit I was both curious and anxious when I read that there was a Doctor Who RPG. The child inside of me was gleeful that people had put the Doctor Who universe into a form that can be played by many and then the adult in me grew very cynical indeed. I wondered how they would deal with the Doctor as a character, will this be played by a player or is the Doctor like a super cool NPC.

Will there be references to the Doctors companions from the series? Which ones and indeed which Doctor/s are we going to interact with? There really was only one way to find out and so in a recent Humble Bundle sale, I picked up the RPG and some companion books to go with it. The following will only deal with the main rulebook and will try to look at it with a fresh pair of eyes with no expectations. This is going to be hard! 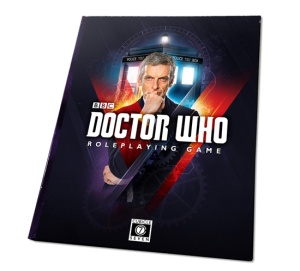 On the cover of the rulebook is Peter Capaldi, so you would be forgiven for thinking that the whole system revolves around him as a Doctor and you would not be entirely wrong in that thought. In fact, the book is full of images from the series of the 12th Doctor. There is the odd picture of Matt Smith in the book but Mr Capaldi is definitely more present.

If you have interest in other Doctors then you will need to either make it up or buy the relevant companion book for the Doctor. Yes, they have 12 more companion books, one for each Doctor, but I digress.

First and foremost, the book is certainly designed towards people who may never have played any kind of RPG before. I get the feeling that it’s also aimed towards a younger audience; the writing certainly is not childish but somewhat simplistic. Experienced GM’s will find themselves skipping a lot of the book and trying to find the important bits that are needed to run a game. I applaud how this is written, getting young people into RPG’s is entirely a good thing, and I can remember several times reading Warhammer Fantasy RPG (my first RPG) and not understanding some of it. The dice system uses only D6 dice to enable the maximum amount of people to play it, because most people have at least one D6 in the house.

Who can you play?

It is totally possible to play the Doctor in this game. If you are new to it they do encourage you to use the stats of a pre-rolled Doctor, but there really is nothing to stop you ignoring that and making your own re-generated version. I am in two minds about being able to play the Doctor as a character. On the one hand, it would be super fun to RP him, but as a GM you are going to have to think of some pretty devious situations. Whenever I watch Doctor Who sometimes I feel that the Doctor is overpowered, and I would suggest on first glance through the rules and the stats that the one in the RPG is as well.

But I think the idea for a GM would be to disable the Doctor somehow, to make it a lot more about his companions and develop the story around both of them. There are several options that a GM could take as to who the players can role play as. 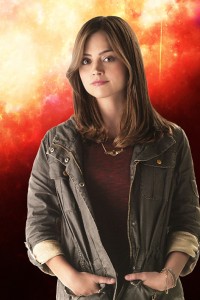 The Doctor and Companions

The book supplies you with a bunch of pre-rolled companions which is excellent for people who just want to play a character from the existing multiverse. This is where I get a bit controversial and say that I feel that players should not be using these pre-rolled characters. I understand why they are there though; younger players might prefer to be Clara or one of the other companions that the 12th Doctor has had, but for me this would really limit the role playing element.

This option would also be good for people that are new to being a GM. You have a universe that you are familiar with as well as characters you already know some of the traits of so it’s a good introduction but I still don’t think we should be leading new players down this path.

The Doctor and New Companions

This is already a better option, rolling up your own companion for me would certainly be something I would want to do, but then I really like the playing a role part of role playing. I love having those moments where I have to follow what a character would do, rather than what I would do. Don’t get me wrong I love a good RPG fight, but will always try to fight in character.

Okay yes, rolling up a new character takes time but there is nothing to stop you taking a pre-rolled character and changing a few stats, so that you give the companion a new personality and background. 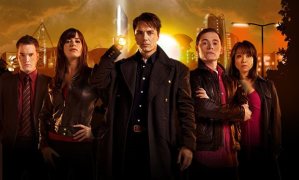 No Time Lord and/or Unit & the Torchwood

The Doctor does not have to star in your adventure.

In this case, I would actually make the Doctor a random NPC; have him in disguise and just get him to help out a little bit here and there. The difficulty comes here for when you want to travel time and space, but again you can make the rules up a bit here. Your players could be members of UNIT or Torchwood and have access to a Vortex Manipulator or other time travel device. The idea after all behind all RPG is making a great story and running into the Doctor in one or more of his (soon to be her) incarnations would be a pretty incredible adventure within itself. Maybe just for a change, you are rescuing the Doctor so that he can help with a grander mission.

One of the harder things to get your head around with any game system that you don’t know that well, is how often to add experience points to a character and how many. Now the Doctor Who RPG does not really have an XP based system. It favours rewarding players for playing a character trait, or showing prowess in a certain attribute and GM’s are encouraged to ask a lot of questions of themselves before adding to player attributes. Companions (like the Doctor) should have their flaws so it has to be exceptional play for the GM to add something to a skill.

Story Points are given out a lot more regularly and can be used to change the outcome of events and succeed where the roll would have normally made them fail. If this sounds like a player can easily get out of your devious traps then there is nothing to stop you being a bit more evil as a GM but this will really depend on what kind of GM you are. Remember that you as a GM are not here to win, you are here to tell a story which hopefully the players will have fun being in.

I’ve already said that if you are a seasoned GM, then the Doctor Who RPG may not interest you a huge amount. If that is not the case, it might be worth your while looking into. I can see that any story teller worth their salt will be able to work around the issue of the Doctor being overpowered. I also think they will encourage a player to play a character that is unknown to the universe and work that into the story. There is so much canon to be had here and I think the GM should embrace that, being confined to the restraints that might be put on you by Steven Moffat just feels wrong. It is after all an RPG and a universe that is flexible and embraces the fact that it’s “Time Wimey“.

In truth, I don’t know what to tell you. I bought it in PDF form along with a bunch of companion books in a Humble Bundle sale for about $15 USD and I am very pleased with that as a purchase. Being a seasoned RPG player I would have been quite disappointed in the rulebook at its full price, but quite happy with what I paid for it. If you’re looking for a beginner friendly RPG then this is certainly it. I’d like to run a fun campaign for kids who are into Doctor Who without any of them being the Doctor because I just feel that there is too much at stake to be the Doctor, or maybe it might work if one of their parents were to play the Doctor.

You can find out more about the Doctor Who RPG on the Cubicle 7 website. Do have a look at it and tell us what you think of it. Have you already played it as a system? We would love to know how you go on with it! Give us your feedback via the comments section or over on Facebook, Reddit or Twitter