Pocket Mars is a card game that boasts simple rules, and packs a lot of gameplay. I’ve had a copy of it for a while now and remember talking to the publishers Board and Dice about it back at UKGE, and at our recent September Meetup, I finally got round to playing it.

Pocket Mars is a card game that boasts simple rules, and packs a lot of gameplay. I’ve had a copy of it for a while now and remember talking to the publishers Board and Dice about it back at UKGE, and at our recent September Meetup, I finally got round to playing it. 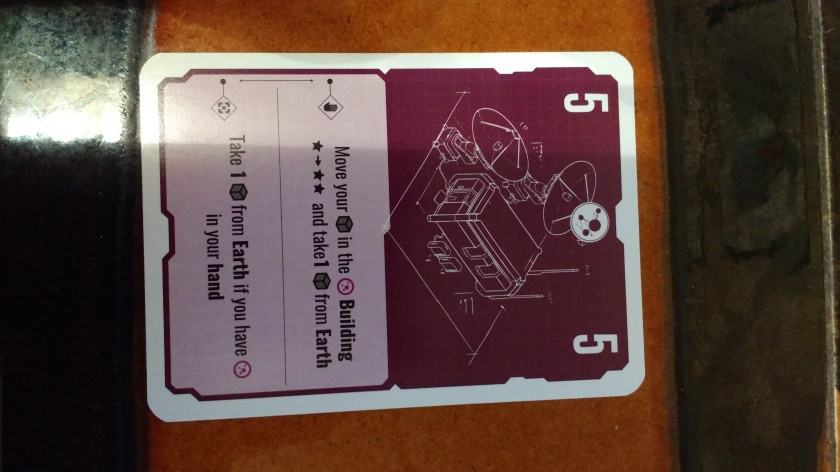 Being such a small game, there is not much to talk about design wise, but Michał Jagodziński has done a beautiful job. The box is tiny and I really like the artwork; the astronaut has a big happy smile painted on his visor, the colours are really vibrant and the box is well laid out. Inside the box, you’ll find an instruction booklet which is only 11 small pages long, a small bag of wooden pieces and 49 high quality and easy to read cards.

Each player gets issued a spaceship card and a small white wooden cylinder to track their energy marked on the spaceship card, as well as seven wooden pieces to represent the astronauts who are the same colour of the ship. Mars is represented by five cards that depict the buildings that your astronauts can occupy. Each building sitting on Mars is colour coordinated with the cards that relate to it. The colours are Green for Ecosystem, Yellow for Energy, Purple for Science, Blue for Water and Black for Construction. The cards also have two spaces to place astronauts, which are used for scoring.

You can play the game as a single player, each copy of the game comes with a specific set of instructions for playing the single player game. We won’t be covering that in this particular review, as I am focussing entirely on the multi-player version.

Let me start by saying that the game is not super hard to learn how to play, however, the tactics that you can employ to win are multilayered and may take some time to master. The aim of the game is to be the player with the most points, when the first player places their final astronaut into a building on Mars and finishes their turn. To get your astronauts to Mars, you need to transport them from Earth on your spaceship and you use the cards to do exactly that. Each player at the start of the game is given four cards from the draw deck, two of which they choose to place face down in front of them into what will be known as the Prep module from here on in. They can look at their own Prep module cards as often as they like, but not swap them unless they have a card that allows them to do so. On their go, the player can choose one of five actions to do, these are as follows:

Play a card from their hand

The player performs whatever action is depicted on the card by the hand symbol, then the card is discarded.

Play a card from their Prep module

Playing a card this way triggers the action on the card that is next to the Prep module symbol. The card then will sit below the building it relates to; I.E Yellow cards go below the Energy building. Secondly, the player compares the number at the top of the card with either the building card, (if there are no cards below the module card, ) or the topmost card that has been played below the module. If the number is higher, the player may move an astronaut from their ship into the building they played the card under. The player may then optionally trigger the action that is on the building itself, which in our example would be to gain one energy.

Play a card from other players Prep module

This is a bit of a tactical risk. Playing a card that is within another players prep module still activates the relevant action on the card but it activates it for the player who owned the card and not you. You are not allowed to look at the card before you play it but there are cards that allow you to take a look at a players prep module but then you have to remember what was on the cards. When the card is played, you do get to (optionally) trigger the building action for yourself.

Take an astronaut from Earth

A simple move to get more of your astronauts off of Earth. Astronauts only score you points when they have left Earth so it’s worth loading your ship up as much as possible.

Sometimes you just need to discard. Doing so takes a whole turn, but gains you one energy. When playing some of the cards, some will require Energy to perform their action and some will gain you Energy, so it’s usually good to have some stashed away.

As previously explained, the aim of the game is to be the highest scoring player it helps if you know how to score points.

So as you can imagine there are enough ways here to score points that can mean it’s not necessarily the person who triggers the end that wins.

I’ve played quite a few games of Pocket Mars now and I must admit that I enjoy it. Once I had committed the main five actions to memory, I then began to strategise more. I found myself looking for ways to make combination plays, enabling me to take multiple astronauts from Earth or place multiple astronauts in buildings; I also found my brain looking for ways to slow down my opponents.

The game is put together really nicely, one particularly nice bit is the card that you are given as a player, which reminds you what actions you can take and how they work; it makes learning the game a lot easier. The specifications are actually right and games usually last 15-30 minutes as stated, so it’s perfect for something to fit into that timeframe. I will say that there is an advantage to having played a few games because you then have an idea of what the cards do but it should not take long for new players to pick it up. Price wise if you can find it for £10 rather than the £15 mark then you are in for a bargain.

Have you played Pocket Mars? Have you played anything else that sounds similar? Would you like to recommend any games for us to look at? Get in touch with us using the comments section of this post or via Facebook, Reddit and Twitter.

One thought on “Pocket Mars – Board game review”