Ever hear of Tucker’s Kobolds? If you have then you know that a half-dozen hit points does not mean an easy fight. In this week’s Dungeon Situational I’ll pitch a few ideas for the kinds of traps that kobolds may construct given their stature, disposition, and available resources.

As usual I’ll be using D&D 5e rules, but all rules and numbers can be adjusted to suit your campaign in other editions, systems, or for varying levels.

Taking advantage of their minute size, the kobolds have lined this narrow corridor with murder-holes, hatches stuffed with stone and dirt so that they are barely distinguishable from the earthy surroundings. The unwary traveller will find themselves surrounded by cackling death, unable to fight back effectively. A player can spot the fragile fake walls with a Perception, Investigation, or Nature check DC 15. If they fail to spot the fake walls then the players will be surprised when the kobolds attack. Kobolds will evacuate the murder-holes when overly threatened via chutes dug out in the back.

The standard Murder Corridor is tight enough that medium creatures can pass through it somewhat uncomfortably, but have disadvantage (or suitable penalty) to swing weapons. At higher levels the murder-holes may be small enough that the kobolds are treated as having total cover, and it may be possible to seal the corridor at either end.

Variation: Elevator Jam – A wooden platform lowers up to five medium sized creatures down a recently dug shaft. In this instance the kobolds are able to jam the elevator prior to opening the murder holes outside of weapon’s reach and pelt the creatures below with acids, fire, and javelins. If threatened by ranged assault the kobolds will unfasten the elevator mechanism, leaving the platform to fall the remaining distance.

Tripwires are a staple of kobold trap making, either as a trigger or as a trap itself. They might hide the wire in shallow water, clutter, spider webs, or simply encourage adventurers to run straight into them by pelting them with javelins from a distance. Some short and simple uses for tripwires:

Caltrops – Set before a tripwire impose disadvantage on Dexterity saves made to avoid falling prone. Set after the tripwire cause the creature who falls into them to take 2d4 piercing damage instead of the standard 1, but their speed is unaffected.
False Floor – A creature who fails to save against the tripwire collapses the false floor on the other side. Any acrobatics check the creature makes to reduce falling damage is made with disadvantage.
Fake Wire – The wire is set in such a way that it looks like a standard tripwire, a DC 10 Perception check will spot it, but a DC 15 Perception or Investigation check is required to realise that cutting or unfastening the wire will trigger a stone block in the ceiling to fall. If the wire is cut, creatures below the 10ft x 10ft space must succeed on a DC 14 Dexterity check or take 3d10 bludgeoning damage and be restrained by the weight of the stone block.

A simple bottle of health potion left innocuously in the stashes of kobold chieftains, amongst the remains of former adventurers, or in the medicine cabinets of kobold beast-keepers. Any adventurer would be glad to find it, and fools not to take it, but may not think to check the quality of the wax seal. A creature can spot the misshapen wax seal with a DC 16 Perception check, spot the discolouration with a DC 16 Medicine check (or use of a herbalism kit), or identify the anomalous properties with use of an identify spell.

If a creature drinks the potion, they still regain hit points as per a normal potion of healing, but must succeed on a DC 12 Constitution save or suffer one of the following effects for 24 hours, or until cured by a Lesser Restoration spell, or a DC 14 Medicine check (which will require the use of a herbalism kit):

With hordes of treasure amassed by their dragon overlords, kobolds are wise to use the greed of adventurers as bait for some of their crueller traps, and dragons are sharp enough to know that dead adventurers leads to a net profit, so will happily offer up a pittance to their servants for building elaborate contraptions. The Gold Medalion wall has a collection of gold coins and similar trinkets bolted into the masonry like some miniature trophy collection, each one requiring a DC 12 Strength check to remove. The exact method of triggering is up to the DM, but some of the trinkets trigger one of the following effects when pulled:

Spikes – A DC 13 Perception check spots the hole in the wall behind the coin as it is removed. If the creature removes it, any creature currently engaged in removing the coins must succeed on a DC 15 Dexterity saving throw or take 2d10 piercing damage as long, steel spikes spring from the wall, the creature who removed the triggering coin has disadvantage on the save if they failed to spot the hole.
Swarm – Once 8 or more coins are removed the holes formed by the bolts start to spill out with small, poisonous insects which form an insect swarm (see the monster manual for statistics, choose as appropriate). 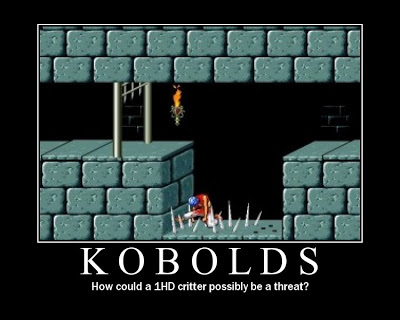 Their reverence of the mighty dragons cause kobolds to destroy themselves in an effort to emulate their masters. Poisons and acids are easy enough for any kobold chemist to replicate, lightning and cold may be out of reach to all but select few sorcerers, but fire is always a favourite toy. Oil is quick to burn but easily spotted, wood is surreptitious but slow, but a keen-witted kobold herbalist may be able to cultivate plants that emit flammable gasses.

Piped into a chamber, the gasses can be detected with a passive DC 12 Perception, and will immediately come to the attention of any creature specifically noted to have keen smell (such as a wolf), and can be identified with a DC 13 Nature check to be potentially flammable. The ignition source could be a simple flint and steel, but naturally concealed in the mouth of a carved dragon head, unless of course a creature enters the room with an open flame. After ignition, the chamber will be safe for 24 hours while the gasses slowly replenish.

Alternatively, flour bags dropped into a room with naked flames may be easier for your average kobold to put together. In either case, creatures within the range of the explosion will need to succeed on a DC 13 Dexterity save or take 3d10 fire damage, or half as much on a successful save.

We all have so many ideas to share, such simple things that spark the mind and – if not used in their own right – may lead to new ideas. I have a couple of dozen ideas line up, but I’d rather hear from you. What would you like to see in next week’s Dungeon Situational?