Recently, there has been a spat of activity taking advantage of chat-based systems. Indeed, even we have been working on chatbots of our own, in hopes to make our Discord server a bit better. However, one that amused me recently was a chatbot on Facebook, which was made solely to enter people into a prize draw and yes, to add your name to a mail list. Let’s dissect one and see what benefits these bots have! Recently, there has been a spat of activity taking advantage of chat-based systems. Indeed, even we have been working on chatbots of our own, in hopes to make our Discord server a bit better. However, one that amused me recently was a chatbot on Facebook, which was made solely to enter people into a prize draw and yes, to add your name to a mail list. Let’s dissect one and see what benefits these bots have!

The bot in question was made by a company called Paessler, where Greg the Sysadmin was the name of the account. The company deals with network monitoring, so some of their articles are interesting to me anyway. The prize draw was for a Commodore 64 bundle, which, really, made me go for it. Originally, I expected to go to an external site; but I ended up playing a game (admittedly, a primitive game) through Facebook Messenger.

The bot was capable of taking me on a whirlwind adventure, transporting me to a fantasy land. Granted, it was a pretty primitive adventure, but effectively, it was just a game where we had multiple choices. From answering my door, to if I’d attack a group of bandits, all the way to if I’d go drinking, or poke a dragon in the eye – It was a typical adventure for the likes of an old MUD or a Text-Based RPG game.

There was gold to be gotten, in which would allow us to be in the running to win a Commodore 64 kit, along with all that you need to get it up and running. The machines have all been tested and as such, I figured that for a bit of fun and to try and win a bit of gaming history, I’d enter the competition – Because hey, you’ve gotta be in it to win it, right? So, after pressing the options and beating the little RPG, it said I was going to be entered. Amazing! 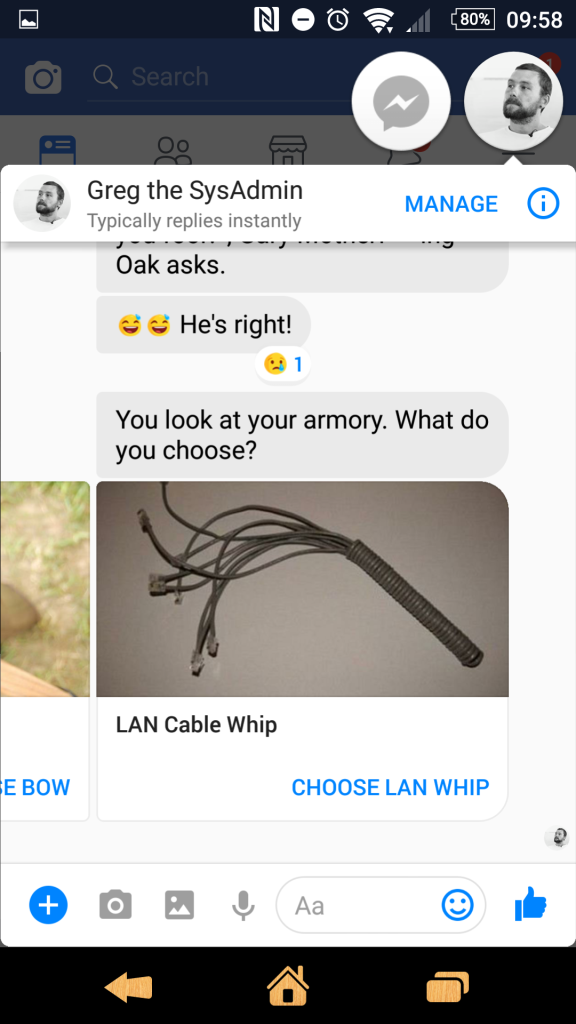 Now, there’s always a catch – And this catch made a lot of sense. You know, part of the reason people do a competition is to encourage more people to jump onto their channels. As I played through the game, upon completion, it asked me to enter my email address. I read the terms and conditions it gave me and, as it suggested, I was signed up to their mail list. This was fine with me, as it was something I was interested in… But it made me think, which I’ll delve into more detail later.

Still, the bot went along with only a few minor niggles – There was one point where the bot froze up, not giving me an option to submit my next answer (even if I typed it in exactly). I thought all was done for, but refreshing the chat made the options come back. Further to this, there were a few spelling mistakes here, but the company wouldn’t purport to be error free – If anything, it added to the enjoyment for me.

The last time I dealt with something similar to this was via an app for a company called ClearScore, which asked me for some basic information about my financial health. I think everyone at some point in their lives have had concerns over money, I know I have. When I first took to ClearScore, I wanted to just see what I looked like to potential lenders. I wanted to learn more about what I could do better and hey, what can I say, I learned a lot in a short space of time. So then, fast forward a year of using the app, they introduced a little thing called ‘Coaching’. During this mode, you could do a little text-like chat with the app, where you pressed some pre-populated responses.

These pre-populated responses led to specific answers from the app – If I said I was doing bad, it would point out some things I could do to improve. If I said I was doing well, it’d give me some words of encouragement to continue with the interrogation. The question is, what can we get out of this? What is the purpose of having a pre-populated response, when really we all have differences in our daily lives?

Whatever your experience is with these types of questions and response styled apps, whether it’s entering a competition by playing a sort of RPG, or if you’ve experienced the ClearScore app as well, I’ve realised that I’ve seen these before. In fact, the last time I had seen these before I was introduced to chat bots… Was a create-your-own-adventure book. This is entertaining to me, as I was hugely passionate about these as a kid. Now the world of business sees the advantage of giving people the same treatment: Here’s what you can do, choose it.

This has led me to my next project with the Discord bot. I’ll not unveil it for now, but let’s just say this: Create-your-own-adventure books are amazing. Pre-populated response systems are here to stay right now and so I pass the question to you: When was the last time you did a create-your-own-adventure? More importantly, do you see the comparison of an automated chat system and one of these books? Share your thoughts in the comments below, or over on Facebook or Twitter.