Items sets have been a classic component of RPGs for many years, perhaps most commonly in ARPGs. Groups of lootable items brought together by a shared history, each powerful in their own right, but together immensely potent. They might have been crafted together to work in unison, or perhaps they were brought together once and never again can be divided.

In this, as in most other Dungeon Situational articles, the items below are written with the Dungeons & Dragons 5th edition rules in mind, but can be modified to suit any edition or system you choose. Presenting…

In a children’s story told to you by a beloved parent, a sibling, a teacher, a colourfully dressed bard, or written in the first book you learned to read, the tale of the Skyguard is a hero whose name was forgotten by everyone, but her deeds sank into the history like stain into wood. Heroes gathered beneath her rainbow wings to fight by her side, lightning rang out from cloudless skies at her command, and not even a god-slaying monster could stand before her might. But she is only a story, told to children before bed.

Skyguard’s Honour is a set in four parts, best used by a cleric or paladin, but most classes will find some or all of its components useful. The items include a unique weapon, a pair of boots, a holy symbol, and an oath that does not physically exist, but conveys a permanent bonus.

Set Rules: Each individual part of the of the Honour requires that the user spend 24 hours to attune to it to activate its magical properties. Attuning to more than one item in the set unlocks the abilities of each according to the number of items to which you are attuned according to the list below each. Being attuned to any number of the four parts of the set counts as being attuned to one item for the purposes of attunement limits.

This spear of golden wood and gleaming steel has a sharpened crossguard below the tip that curves forward like arched wings. It is lighter than its materials might suggest, perfectly balanced, and it gleams with energy as it moves, sparkling in a brilliant array of colours.

The Rainbow Ranseur is a spear that has the finesse property, and you gain a +1 bonus to attack rolls made with it. When you hit a creature with an attack using the Ranseur it deals an additional 1d4 fire, lightning, radiant or thunder damage, the type of damage is decided at random when you first find the Ranseur, however at the end of a long rest you may change the damage type to any of those listed above.

A pair of soft brown leather knee-high boots, with a line of glorious feathers leading up the outermost sides, concealing the steel buckles. When you find them they are sized for a small creature of sleight and supple build, but attuning to them causes them to reshape to fit the new owner.

While wearing the Wind Rider Boots you add half your proficiency modifier to Animal Handling checks made to control a flying mount. Attempts made to unseat you from your saddle while you are riding a winged mount have disadvantage, and you have advantage on saving throws made to resist any such effort. Flying at steep angles or even upside down does not unseat you from your mount.

A gold and silver pendant on a chain that looks weighty for its burden, and yet the whole is shockingly light. The pendant is inlaid with slivers of precious minerals to create the semblance of a rainbow, and yet textured like serpentine scales winding around the simple arrowhead shape.

Loyalty’s Insignia has 1 charge. You may expend 1 or more charges to cast a spell from the Insignia’s spell list at a level equal to the number of charges expended, whether you have them prepared or not. It recovers all of its expended charges at the end of each long rest. You know all the spells from the Insignia’s spell list if you did not already, and you always have them prepared; they do not count towards your limits of known spells or the number of spells you can prepare.

At the end of a long rest you may designate an ally you can see within 30 ft. of you. For the next 24 hours whenever you target that creature with a spell or spell like effect (such as a Channel Divinity effect) you may increase the range of that spell by 100 ft, even if that spell would normally require you to touch that creature (such as Spare the Dying or Lay on Hands).

Oath Of The Skyguard

They may appear engraved at the foot of a statue, scattered amongst the text of an ancient tome, overheard in a secluded chantry, or written plainly on a scroll hidden in a mountain of a thousand rolls of paper. Anyone can read the words, but to swear to them and abide by them requires that one truly believe. 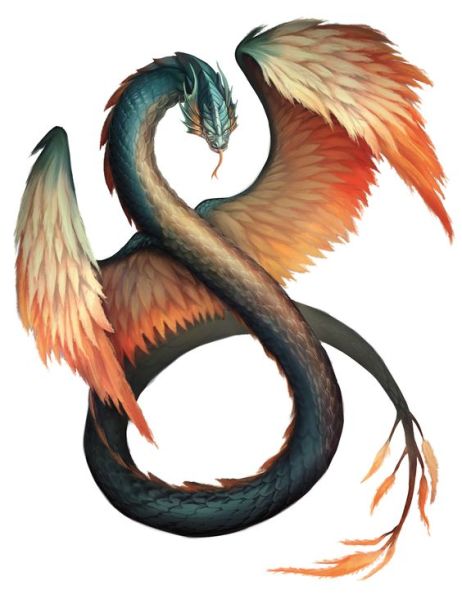 Gain enough experience to advance to your next level. Once these benefits are conferred to a creature the Oath is “expended” as the forgotten deity can only anoint one champion.

Channel Divinity: Call Forth Toltecatl
A Couatl named Toltecatl (tol-teh-CAH-tul) appears in an unoccupied space within 30 ft. of you, summoned from a plane of existence belonging to ancient and forgotten gods of light and justice. She is loyal and friendly to you, and is willing to act as a mount, but is not subservient to you, and will therefor act as she believes will be to your benefit. Toltecatl remains on this plane until dismissed as a free action, or until she chooses to dismiss herself.

Ok! Another typical Dungeon Situational article before I change gears a little, but as always you control the subject. For next week, cast your vote on…

The eponymous dragon, often misaligned or misused despite being on the cover of the book, I offer three unique takes on dragons based on some of our previous works here at GeekOut.

NPCs are multifaceted and unique beings, and a potent tool in the DMs arsenal. Complete with uses, motivations, personality quirks and roleplaying tips, three such non-player individuals.

And finally, horrors that await the players in the worlds beyond worlds, in the many thousands of planes not bound by the confines of the material plane, although we shall only look at three of them.