Geralt, one of the most popular characters in RPG history, is a Witcher. A mutant of sorts, whom possesses powers far greater than that of most humans; a deciding factor in wars, able to use runes and two different types of swords for fighting. The Witcher is a franchise wrought with gratuitous violence, sex scenes and long, epic quests. Naturally then, it was a fitting game for me to try, as I do love a good RPG! But, as this was the first Witcher game I tried, what did I make of my introduction to the franchise as a whole?

Geralt, one of the most popular characters in RPG history, is a Witcher. A mutant of sorts, whom possesses powers far greater than that of most humans; a deciding factor in wars, able to use runes and two different types of swords for fighting. The Witcher is a franchise wrought with gratuitous violence, sex scenes and long, epic quests. Naturally then, it was a fitting game for me to try, as I do love a good RPG! But, as this was the first Witcher game I tried, what did I make of my introduction to the franchise as a whole? 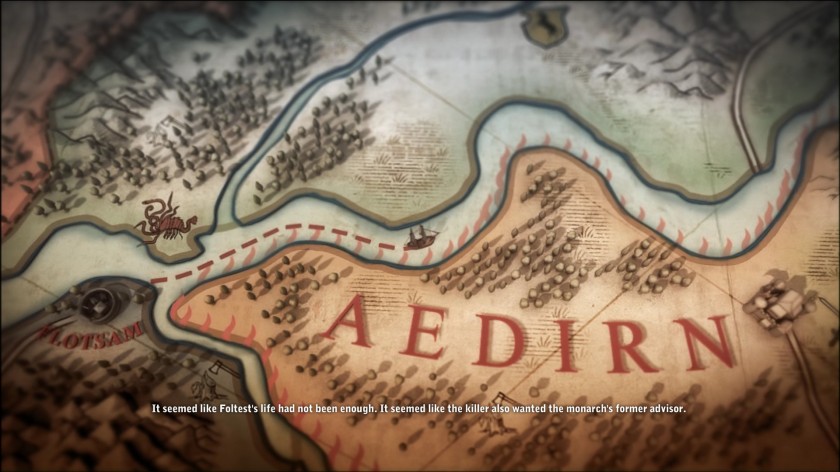 Witchers are mutated humans who have the ability and training to hunt and kill monsters; so when one Geralt of Rivia is involved in a war which sees the assassination of Foltest, king of Temeria, people were quick to blame the only one who was in Foltest’s company. Locked away, Geralt explains his side of the story to Vernon Roche, the head of the special forces of Temeria, who allows Geralt to escape his imprisonment and go on a journey with him to go and find the real killer of Foltest.

Throughout the game, Geralt tries to learn more about his past, along with trying to find and deal with the killer of Foltest, another Witcher by the name of Letho, who is set to be Geralts toughest fight yet.

Straight off the bat, the game gives you a skippable tutorial, so points for that! However, the tutorial itself is actually pretty tricky to get used to right away. You learn about everything in the game – Movement, interacting with items, people, doors and the likes. You learn about medidation, drinking and making potions, runes and swinging two different types of swords around. You learn everything you’ll need, then you fight in some arena-style fights and the game determines what level of difficulty you should be playing. So far, so good.

One slight aside for the opening tutorial is how tough the combat system is! Don’t get me wrong, I like a challenging game, but my god, this is the sort of thing that should be introduced progressively, rather than “here are 10 buttons which all do a specific different thing in combat, now figure out when’s best”. The more you play however, the better you get at it, so it’s not too bad.

Once you’re in the game, you are introduced to the quest system, where you have a main quest, accompanied by side-quests. When I say side-quests, there are many of them. This is a great thing to have as an RPG, as it seriously extends the lore and how long it takes to get through a game. You can complete the main quest only, if you wish to, but you’d be missing out on so much of the game that actually, I do feel that sometimes a player would miss out on what is actually happening in each area. 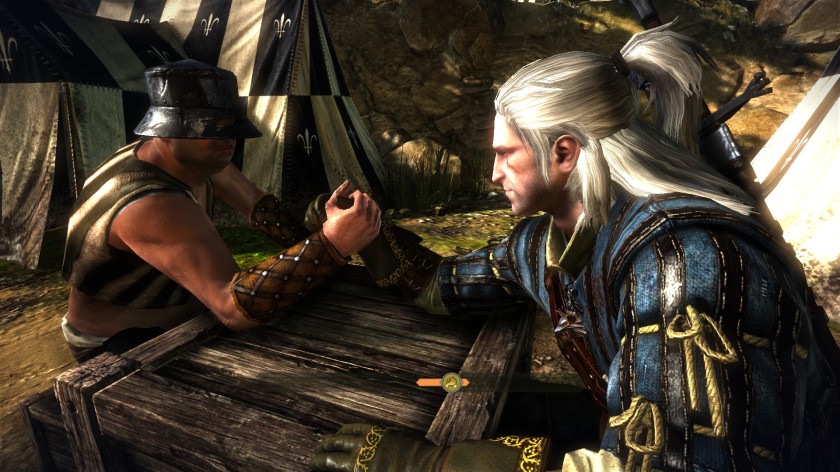 You have a chance to haggle, persuade and intimidate people, based on dialogue options you pick. Along with this, for some actions, you can determine how much you pay in, such as for the mini-games built in, such as rolling dice, arm wrestling and brawling. Stupidly, I find that it doesn’t matter what you pick for rolling dice, as the opponent nearly always raises unless they know they will lose after the opening roll. Another daft point of the mini-games are the simplicity behind them. For arm wrestling, you gently move your mouse cursor back and forth, keeping within a bar until you win. For brawling, you look for the letters WASD to appear on screen and press the corresponding button, with some time to react between. Finally, for dice, it’s just a Random Number Generator game… And stupidly, you can roll dice out out of dice zone and lose them… So that’s… Daft. But whatever, be careful and all that jazz. Basically, there are Quick Time Events in this game, so you’ve been warned.

You fight using two swords, one normal sword and one Witchers’ silver sword. The normal sword is for your big damage, but your silver sword is to hurt creatures such as the undead more effectively. You also have 5 runes, all of which do different things; from stunning, to blasting fire, these runes, along with your swords, are meant to help you get through the game as smoothly as possible. Oh and it’s possible to attack with a spade, so that’s a fun touch.

To get better weapons, armour and the likes, you can either buy them from vendors, or get the recipes to craft them and then find someone who can craft them. This is a strange choice, but it works simply enough. Thankfully, the inventory system splits items into different categories, which makes it quite easy to sort it out… Although it is very easy to pick up too many of a specific resource, which absolutely bogs you down.

Oh, before we move off this section, in Chapter 1, you get a chance to follow Roche or an elf called Iorveth. The game has plenty of branching paths for you to choose between.

The game looks good, but I find that a lot of the time there are issues with the textures used in the game. Nevertheless, the game when it’s all loaded in properly looks nice, albeit sometimes a bit cluttered. As ever, seeing is believing, so here’s our gallery: 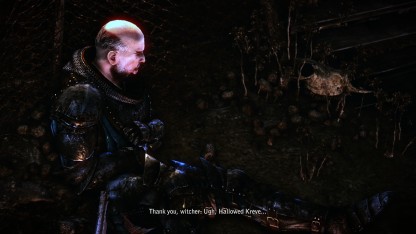 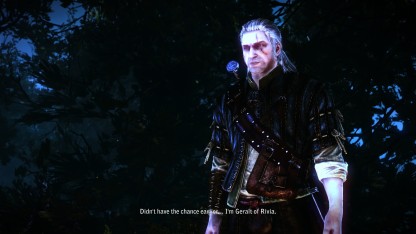 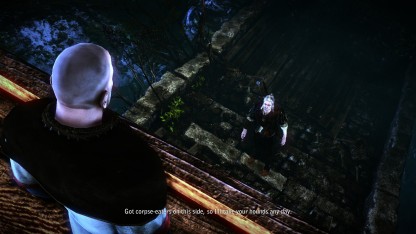 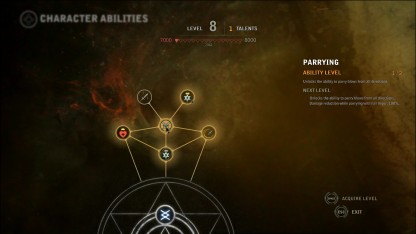 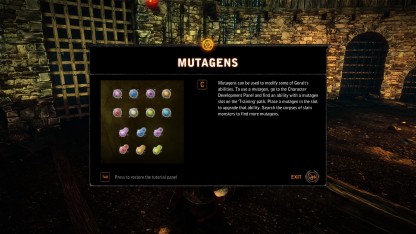 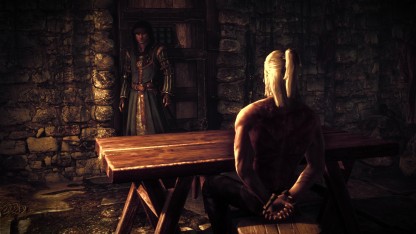 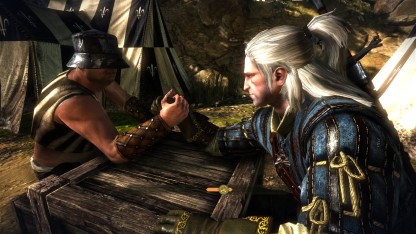 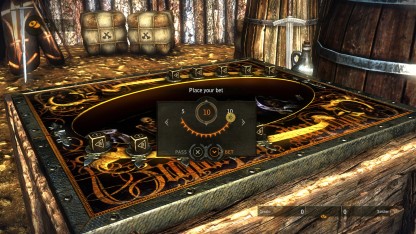 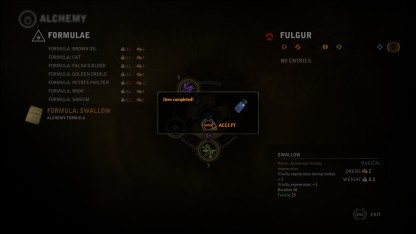 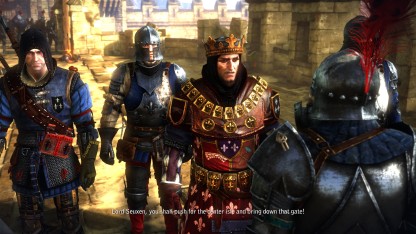 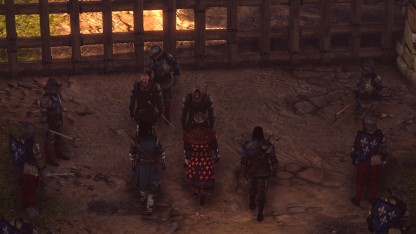 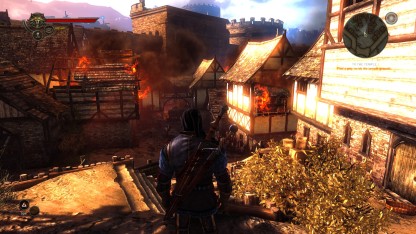 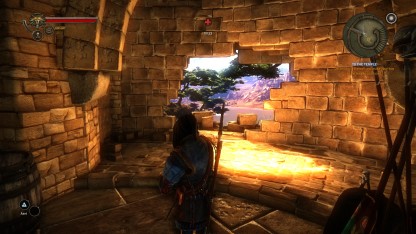 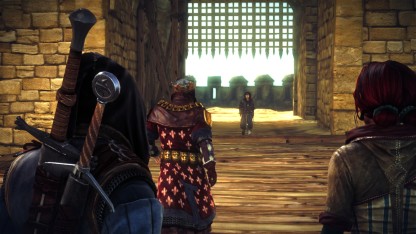 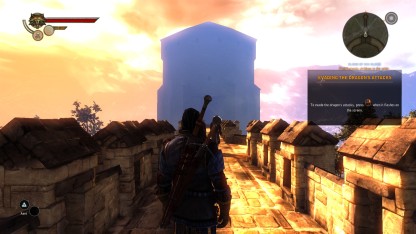 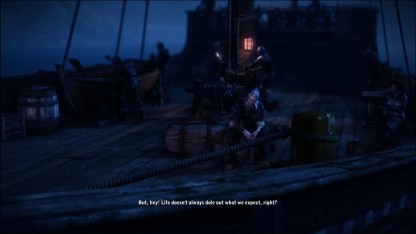 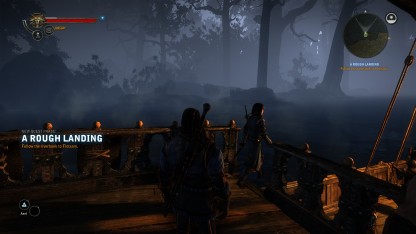 Iorveth talking down to Roche. 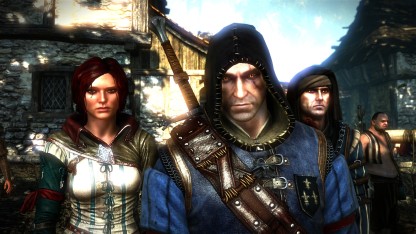 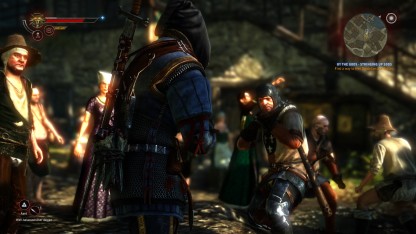 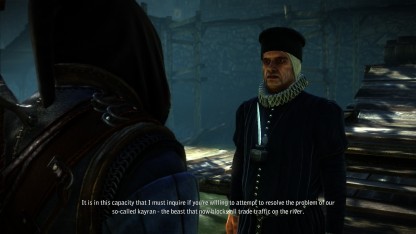 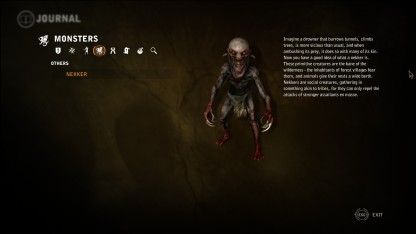 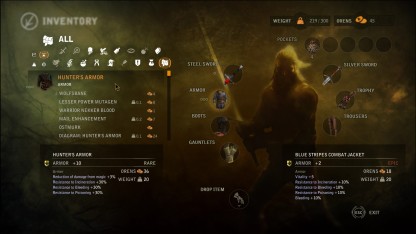 An example of the textures not loading in properly

The audio of The Witcher 2 is actually really nice, probably one of the best parts of the game for me. Honestly, from the moment you start the game, right through to the end of the game, the music in the game is simply stunning. It’s true fantasy as its best, so seriously, spare some time and listen to the thrilling soundtrack.

If I had to tell you if I was enjoying The Witcher, I would say that I am, but I’d put a question mark over that statement. See, the game is well made and the actual RPG elements of the game are truly stellar, but there’re a few things that bug me.

First of all, the game is highly repetitive in terms of what you can do between cities. So you have to do all the dice rolling games? You have to do all of the brawling? You have to do all the arm wrestling? Why? It’s a bit too samey each time, with each person you face only being marginally better each time. Don’t get me wrong, it’s nice to have a diversion, but for the diversion to be the same between all cities, it sort of feels redundant. The Random Number Generator feel of the dice game is sort of dull and the arm wrestling always feels somewhat clunky. Don’t even get me started with pressing WASD for the brawling. However, whilst I am criticising the game for these elements, let me praise it for having elements like these in the first place.

See, what makes this game stand out for me isn’t necessarily the main quest arc (which isn’t that bad), but actually the depth of how much there is to do in the game. Genuinely, I was in the first area for about 9 hours. That’s a staggering amount of time for me to spend in any area in any game, but I love to go through and complete as much as I physically can. Whilst I don’t think all of the side-missions/extras are great, I do appreciate the fact that they’re there in the first place.

Furthermore, the character development is excellent, but it did take me a little bit of time to get over just how poorly this game seems to represent women as a whole. I’m split with The Witcher so far – I love it for what it could be, but this particular title doesn’t feel like the greatest example of what the franchise is. It’s good, but it’s not a must play… But it did indeed make me want to learn more. I could be wrong! What are your thoughts on The Witcher 2? As ever, share your thoughts and opinions below, or over on Facebook and Twitter.