Over a year of GeekOut and it just keeps getting better. This month I decided to poke one of the geekiest bears out there, as divisive a topic as Kirk or Pickard, X-Box or Playstation*, D&D or Pathfinder, and to pitch the giants in the comic book playground against one another seems very du-jour considering Infinity War was released the day of GeekOut, and that I’ll be going to watch it tonight.

Some of you may have seen a few photos and live-streamed footage already, courtesy of our guest from Thors-Kin Podcast, Alex, who helped out with this month’s competition. Here is this month’s slightly belated gallery.

It’s not all that easy to find the entrance to the combined cafe/cinema above the square in Shrewsbury, but I’ve got to say it’s worth it. Tables aren’t big enough to get a proper game in, certainly nothing that takes a lot of space, so next time I’ll remember to put Love Letter or something similar in the travelling bag. Still, coffee, cake, and good conversation is at the core of what the premeet is about, gaming is the backbone of the main event.

A gift from Murray

Montgomery’s Tower Wetherspoons are as welcoming as ever, Zoe and Nicole are ever-welcome additions to the regular crowd, along with everyone else we’ve picked up along the way, and as we get bigger there are slowly becoming too many faces and names for me to keep together, for which I would apologise but we all knew this day would come. Increasingly you’re needing me very little to set up games and get things going, and there’s plenty amongst you who I can leave to simply “get on with it”, my role as host is rapidly becoming more about meeting and greeting rather than teaching people how to play games. 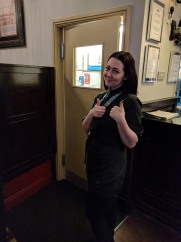 Zoe would be joining us after work

Welcome to the Dungeon 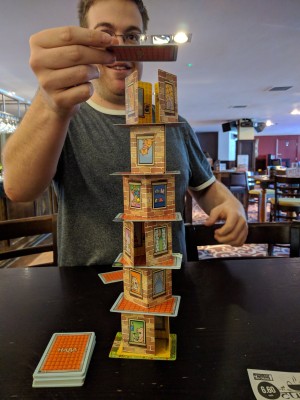 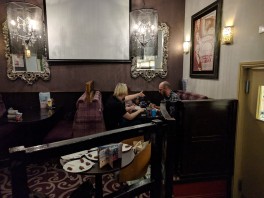 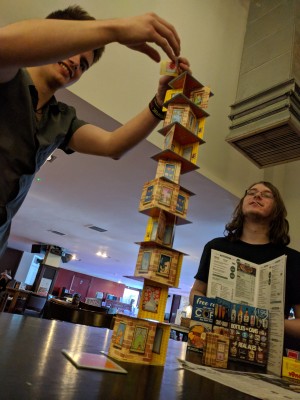 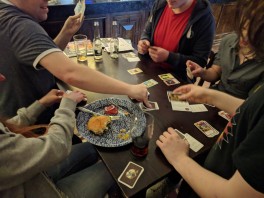 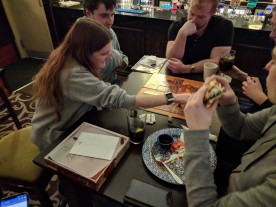 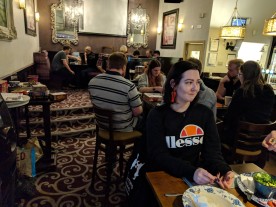 Rin brought some work to get our opinions 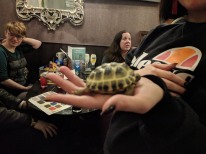 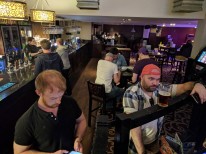 Thanks to the folks at Whetherspoons for helping us get hooked up to the projector, and even going so far as to hunt down an extension cable so that we could delve straight into another couple of games of Worms later in the evening rather than waiting for the laptop to build a decent charge. In a shock sudden-death come back, I took victory in the first game, and whoever was playing the GeekOut team seized victory again in the second, homefield advantage perhaps? But no one can call bias! We won fair and square. 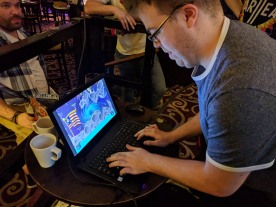 This month’s competition pitched comic book characters against one another in the simplest debate of all, “Who would win in a fight?”. Participants chose their combatant at random from the three teams, Marvel, DC, or non of the above, squared off in debates against one another to ask that age old question again and again. In cases where debates got too heated or a decision could not be reached, I called in someone with some real experience throwing super heroes into the ring against one another, Alex from Thors-Kin Podcast.

Engagement with the competition was low, but those of you who took to the debates seized them with vigour and a level of aggression that I think had less to do with the prizes and more to do with a passion for victory. This month’s disappointing prizes, some weird DC licensed merch, and a voucher to the value of half a cinema ticket, made even more disappointing by the fact that our winner, Mark, already has an unlimited membership with Cineworld.

Huge thanks to Wetherspoons, to Alex and Thors-Kin, and to all of you lovely people, especially those of you who continue to go above and beyond mere attendance to help make GeekOut Shrewsbury something very special indeed.

Next month, May 31st, May the GeekOut be With You. Keep your eyes on Facebook and Meetup for details, coming soon. And for those of you who are coming, I’ll see you at Cineworld shortly.