I’ve been devouring my way through Star Trek: Deep Space Nine of late, and it’s rekindled an unexpected fondness, and a habit of mind to pay respect and homage to those lesser known actors who deserve nothing but the utmost deference. Today, Jeffrey Combs, a regular on Star Trek in a wide variety of prosthetics and make-up, but also a face that appears in considerably less make-up across a wide variety of science fiction and horror films and TV shows.

Let’s talk sci-fi! Two of the most prominent recurring villainous characters in Star Trek DS9 are played by one and the same man, Weyoun – the manipulative and simpering Vorta, and Brunt – a bumbling and officious Ferengi. Often the two characters appear in back-to-back episodes, and unless you know who you’re looking at, or if your particularly keen eyed or eared, then you may never notice, and it’s not just the make-up.

Weyoun – In his Vorta make-up, Combs is a pale figure with hints of violet in the eyes, straight black hair and a pair of ear-crests. The Vorta are the diplomatic and strategic wing of the aggressive alliance, The Dominion, and Weyoun is every bit the embodiment of the role. Every encounter he has with his enemies is a plastic facade of sycophantic appeasing and placating, his superiors – the Founders – are greeted with awe and downcast eyes, and his inferiors with a spectrum of indifference and disdain. He appears to wear his intentions plainly, clearly he is always up to something and using everyone around him to get it, and yet what his end goal may be is a mystery.

Brunt – Liquidator Brunt of the Ferengi Commerce Authority, for the hyper-capitalist Ferengi, liquidators are as feared as inquisitors or FBI agents, and yet they’re still Ferengi. Brunt takes a lot of pride in his work, and wears a permanent look of smug satisfaction under the lumpy cranium and massive ears Combs wears for the role. His single minded pursuit of Quark is often undertaken with full-force to begin with, so things always seem hopeless, but Brunt never seems to have a contingency plan to speak of. Either everything works, or everything fails, but he’s never beaten, it seems it would take a lot to wipe the smile from his face.

The two characters are polar opposite villain archetypes, both with their own particular catalogue of mannerisms and quirks that set them very far apart. Weyoun is a creature of political intrigue, Brunt would not be out of place in a Home Alone film… minus the lobes. Add to that the hard-faced and unyielding Andorian commander Shran from 2001’s Enterprise, and a smattering of one-episode characters, all played by Combs, at some point one must conclude that he’s a fan. Or at least enjoying himself too much in the make-up department.

We often see actors pigeon-holed, Sean Bean for example is often typecast as dead-man walking, or the honest soldier, or both. Christopher Lee’s imposing voice lent itself well to sinister characters with great authority, Helena Bonham Carter is cast as the fast-talking weirdo, and apparently Mr. Combs is the man to have when dishing out luminous serums and potions!

Early in his career, Combs made his name as the titular Re-Animator, Herbert West, from the short series by Lovecraft, whose obsession with cheating death lead to a series of dangerous experiments with deadly consequences. The image of Combs holding aloft the syringe of glowing green re-animation fluid was iconic splashed across the cover. 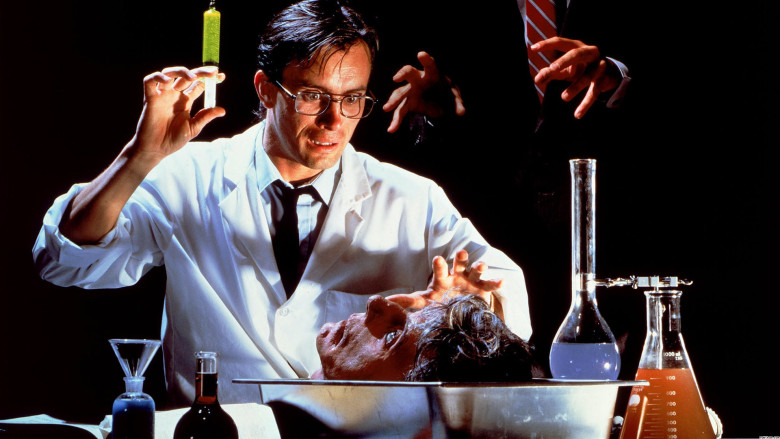 Weyoun’s role in the Dominion is as a handler to the brutish Jem’Hadar, genetically engineered to be living weapons, obedient, and violent. Their obedience is assured through an addictive drug that heightens their strength and reflexes, ketrecel-white, which is a faintly glowing white fluid.

In the 4400, people who vanished from across time are returned with powers, powers that can be given to almost anyone through proper chemical help. Those exposed who cannot gain power wither and die. Guess who plays the scientist who develops the chemical. Guess what the chemical looks like. If you guessed Jeffrey Combs and glowing, then you guessed right… assuming you answered in the right order.

It could be as simple as a few casting directors and/or writers who appreciate Comb’s role as Herbert West, after all, it’s a classic of body-horror, spawned two excellent sequels, and is one of very few direct interpretations of Lovecraft to find any great success.. Personally I like the idea that people take one look at Combs in a casting call and say “y’know what, I can’t imagine anyone I’d rather see distributing vials of this luminous fluid”.

In summary, Jeffrey Combs! That was simple.

Get to know the works of Jeffrey Combs, his distinctive voice rapidly becomes recognisable no matter how much make-up and prosthetic work he’s hidden under, and he is unerringly dependable in every role. Add him to the list of underappreciated actors I wrote a while back, and watch the Re-Animator trilogy. I only just found out he played Edgar Allan Poe in Masters of Horror, so I’ll be watching that.