I’ve been asked a few times about how we get it done; how every month, without fail, we’ve managed to run a GeekOut Bristol Meet since 2013. How every month, I manage to get a large collection of geeks to a pub. How we manage to get people playing games, people drinking and eating together – and most importantly, how on Earth do we get such a good atmosphere? I can’t answer all of these questions (trade secrets), but if you’re looking to run your own Meetup event somewhere, perhaps this is food for thought? 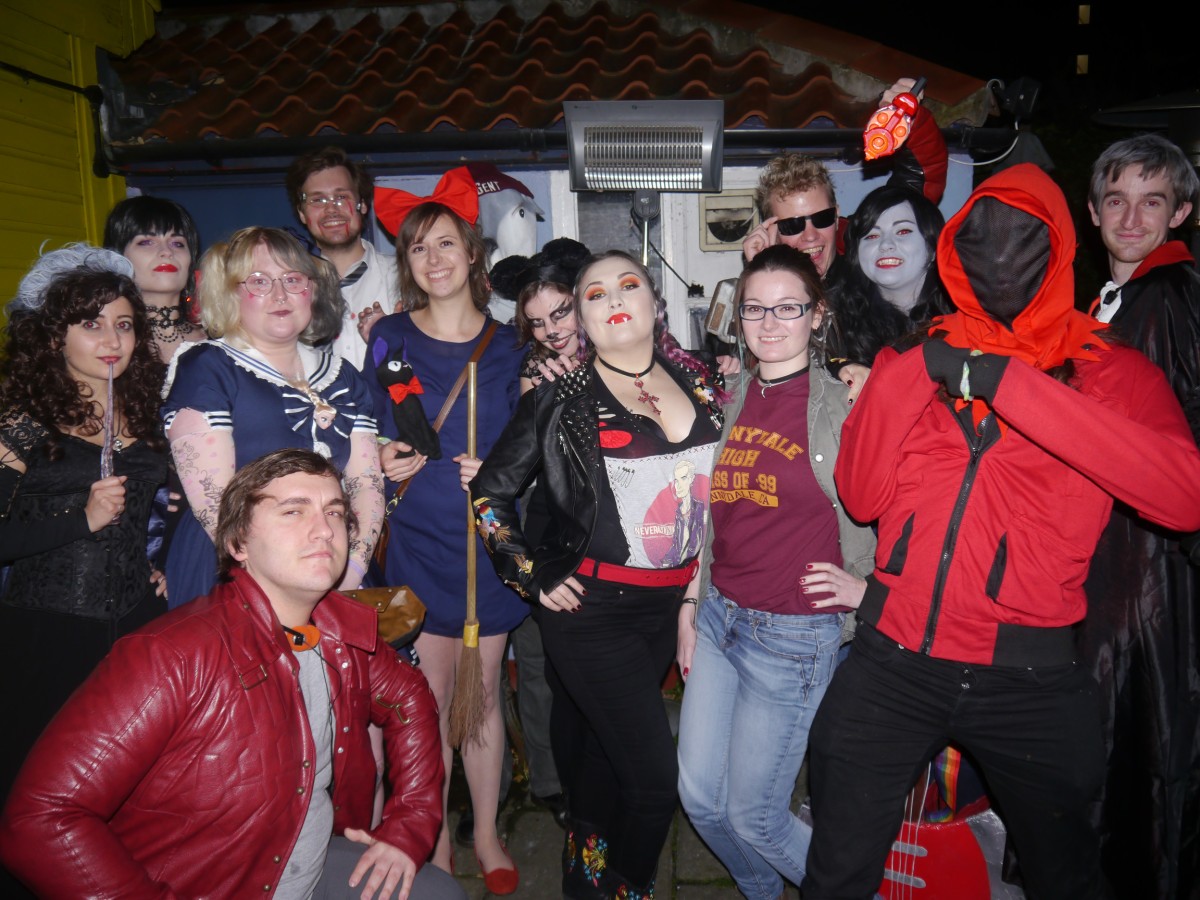 I’ve been asked a few times about how we get it done; how every month, without fail, we’ve managed to run a GeekOut Bristol Meet since 2013. How every month, I manage to get a large collection of geeks to a pub. How we manage to get people playing games, people drinking and eating together – and most importantly, how on Earth do we get such a good atmosphere? I can’t answer all of these questions (trade secrets), but if you’re looking to run your own Meetup event somewhere, perhaps this is food for thought?

First and foremost, let’s get the boring bit out of the way with. Finances. 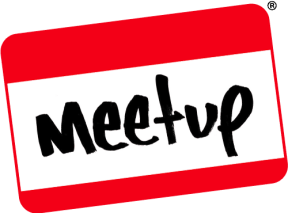 Every month, Meetup blasts me with an approximate £15 charge*. I’ve had a few grievances with Meetup as of late; the design changes are questionable, dropping features that were hugely important to us. However, the attendees from Meetup dropped at one point, but are now rising back up again. So the benefits of using Meetup are still there, but I’ve had to change my plans on how to advertise the events.

Next up, we have Facebook – and yes, I always shove some money on advertising through Facebook and this has shown me exceptional results. The ads always get clicked on and Facebook provide you with a graph to show how much it’s worked. The lowest you can do is £1 per day, but you can do as much as you like. The more you pay, the more aggressive the advertisements. I typically pay about £12-£15 for between 7-14 days advertisement. This is because I like to make it time-relevant, rather than just spamming ads for attention. 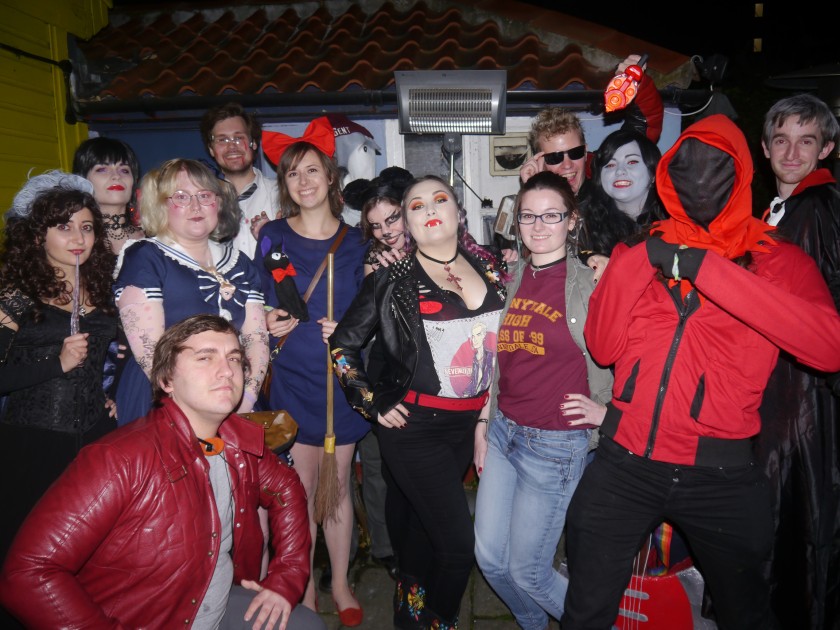 Next up, let’s talk about the event itself, as this also costs money. I set aside about £50 for the meetup day itself, as I’ll be out and about for the better part of 12 hours, if you include the pre-meetup. Pre-meetup food can cost anywhere between £10-£25 and then you have food and drink throughout the meetup itself. Typically I’ll spend no more than £30 at the Old Market Tavern, unless I get peckish throughout the night.

Next up, we get prizes for the competition. I don’t fund the £50 cash; that comes from the Old Market Tavern themselves. We’ve got a great arrangement, which I’ll go into greater detail later in the article. However, we split the £50 cash amongst three prizes; 1st place gets £25, 2nd place gets £15 and 3rd place gets £10. Sometimes the amount changes depending on who’s still around, or if people wish to bargain with one another on the prizes. 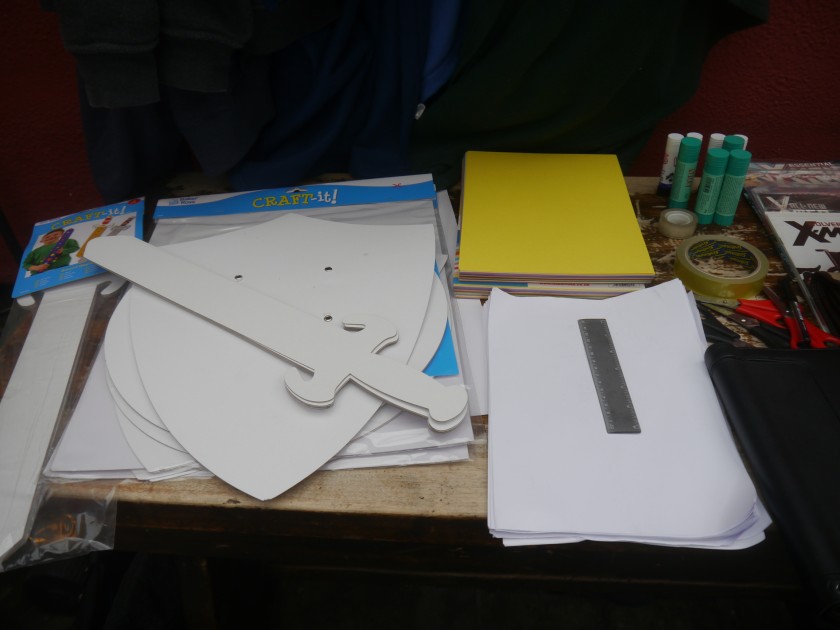 Other than cash, there are physical prizes. It used to be that I set myself a limit of £7.50 for 3rd place, £15 for 2nd place and £25 (at most) on 1st place. However, over the time, this has changed somewhat. Furthermore, an anonymous reader of this website helps us with the 1st place prizes from time to time – So here’s a shout out to that person – Thanks for the help! It makes a big difference!

Lastly, every meetup, I try to get something new. Be it books, games, decorations or bits of tech for the group.I try to set this to £20 and if I haven’t spent anything for that month, then that’s not a problem, I keep it back and hopefully add it to a future meetups funds. It’s a lot of work keeping track of all of the funds, but it’s hugely important.

As such, a meetup, as you can see, can cost as little as making a Facebook Event Page… Or it can be as expensive as £150! Typically however, the event on average costs me £70 a month to run and keep afloat. It’s a lot of money to invest, but I feel we always end up with a fun night out.

*If you’re interested in the exact amount, Meetup charges organisers with more than 100 people in a group $19.99, which at the time of writing roughly translates to £14.97. 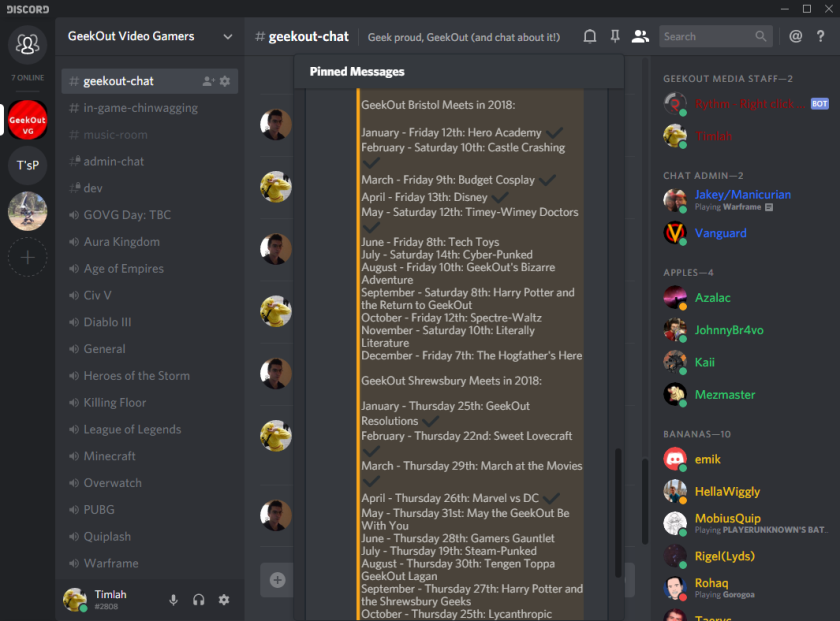 Every month, we have a theme in mind. At the end of 2017, I sat down for a day and came up with a schedule of themes to run. The themes and their tentative dates were set back in December, when I posted the list to Facebook and to our Discord channel. I wasn’t the only one who did this, as Joel did it to. Above is a screenshot from Discord, showing the pinned post, so if you want to get yourself in on one of our meetups and didn’t know the dates, well, there they are! There was some co-operation between the two of us to occasionally have similar themes.

Once one GeekOut Bristol Meet begins, I take up to a week away from it all, before getting back on with it. It always starts with me posting the Meetup event page, followed by the Facebook one. Meetup and I have had some disagreements recently, but there is certainly still a use for it. The changes to Meetup means I’ve had to change my approach to running a Meetup page, which initially saw a drop in participation. Now, however, we’re getting back on track with it. The changes? Simple – I post in the comments throughout the weeks prior to the meetup. 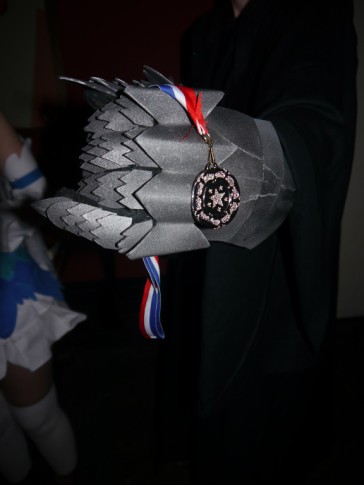 On the week I post the event pages, I try to choose prizes, or at least a rough idea. I then prepare the competition with 2 weeks to spare. Sometimes, this can be harder. Last month’s Doctor Who theme was actually really quite hard for me, as my Whovian knowledge was crazy low. The competition can be the hardest thing for me to prepare; especially if my knowledge is limited. I choose themes which aren’t necessarily in my area of expertise, but only if I know we have fans of that theme.

Between the 2-3 week mark, I put a poll up. This poll determines where we go for our pre-meetup. It’s usually around this time I’ll throw the Facebook ad up and away we go. I keep my eye on the analytics to see how well it’s doing (which isn’t always great, but sometimes it’s a winner). There’s definitely a corrolation between the theme and the number of people who turn up. Also, Friday’s are seemingly busier than Saturday’s, which is strange!

There’s a lot more I could write about; I could talk about running the event on the day itself, but I figured I’d let you all in on the behind the scenes of how I do these meetups. If you’re interested in knowing what my role is on the actual days, let me know in the comments below, or over on Facebook and Twitter.