Chris has just gotten back from UK Games Expo and he had a great time, playing lots of new titles. A lot of them are ending up on Kickstarter, or are already on there following the expo. Chris sets out to share some of his favourites from the event, with more coming in a future article.

Wow, what a weekend that was.

I’ve not been to any other board game expo to compare UK Games Expo to (although I would love to go to Spiel) but this year it felt huge. I would estimate that it was around 10-15% bigger than last year, at least my feet certainly feel like it was. There is so much to see and so much to play and Joel and I tried to do as much as we can. Let’s start with part one of two posts on Kickstarter projects that I encountered, some of these are active now and some will be sometime in the future but certainly, all of them are on my list of ones to watch or I want to invest in or I have already invested in. I’ve got lots to say, so let’s crack on!

The main game was kickstarted this time last year, and I sadly never got round to playing it. However, ThemeBorne were back this year with another Kickstarter for three new expansions and I managed to sit down and play the original game. I want to do a full review of Escape The Dark Castle, but I will say if a fantasy co-op adventure style game with some lovely storytelling elements and a really nice dice mechanic is your thing, then this is well worth looking into. The buy-in for the expansion is not huge, beginning at just £12, but it does require you to have the original game. ThemeBorne have thought of this and if you want to buy the original game (worth £30) plus 3 expansion packs and that includes a Kickstarter upgrade kit costs £80 which is a lot, but there is a seriously huge amount of content within the game that will keep you playing it for a very long time.

Room 17 games had a very successful launch last year of Museum Rush, so this year at UKGE they were showing their new game MireMarsh. This is a game that requires it’s own review, but I certainly will be looking to invest in the game once it gets Kickstarted. You take control of one of a band of goblins, in a quest to become the goblin king by doing an incredibly nasty deed (like killing the last unicorn). You start with a certain set of dice dependant upon your goblin character. Rolling them will allow you to move and defeat encounters, or avoid the various traps that lie around the marsh. But beware… Goblins are squishy and die pretty easily, but the game does not punish you too hard for this.

From what I played it’s a great game, with easy to learn rules and beautiful artwork. MireMarsh is due to go live on Kickstarter in July. 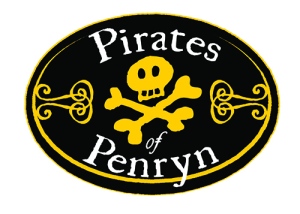 During my lunch, I was accosted by a mother and son dressed in full pirate gear team promoting their Kickstarter project Pirates of Penryn which is now accepting investment. Hailing from Cornwall, Caitlin (the mother) is looking for £9,000 to fund their game with a copy of the game costing you £29 (plus postage) but they have lower tiers to buy into as well should you want to support this adorable looking game. I’ve not had a chance to play the game but the video that is sitting on the Kickstarter makes me think that it is a game that I would enjoy. The game looks like it could be fun, full of pirate skullduggery and it has cute artwork. Check out their page and spend some money already.

Hailing from Dundee (Scotland), DigiSprite is just three people and their game, which is live on Kickstarter now, is Doomsday Bots.

This is one of those games that I sat down, played and thoroughly enjoyed. I enjoyed it so much in fact, that I have already put down £20 to grab a copy of the game. They are already funded, doing so in just 36 hours, which managing director Robyn seemed truly honoured about. It’s a 2-4 player dungeon running game, where you play a steampunk inspired bot. Your goal is to scale a tower and take on a boss to acquire a doomsday device. En route, you will take on various challenges and failure means that you lose a part of your bot. Once you have acquired the Doomsday device, you then need to run back out of the tower with the other players out to stop you. It’s a really fun game and certainly one you should spend money on.

I’ve known about this game since Airecon and we actually have a preview copy, so we will be putting out a review of that sometime in the near future. OneFreeElephant, who are based in Scotland, have got a serious contender here for one of the smallest boxes I have ever seen, with the most amount of content within it. At its core, Micro Brew is a two-player worker placement game that is all about making beer to sell to people, in a bid to gain loyal customers. When you have a full mash tun, you move pieces around in order to make a good brew. At times it feels as though you are playing a physical version of bejewelled, where you can have ‘delicious moments‘ where you can make more than one beer at a time. It’s a great travel game and if you buy two copies, you can play up to four players – Genius! It’s due to go live on Kickstarter sometime in September and is currently undergoing artistic changes, but it’s certainly one to watch.

That’s it for part one; in part two I have another five games to tell you about. One of which I am going to back as soon as the Kickstarter campaign goes live. Until then, go add some of the above accounts to your social media feed, invest in some awesome games and give us some feedback either via the comments section or our normal Facebook and Twitter paths.