E3 is a massive specticle; a grand stage for all of the biggest of publishers and developers, showing off their hard work. Big conferences aren’t necessarily my thing, but all gamers are acutely attuned to E3. Love it or hate it, whether you think it does good or bad for the industry, it’s always a massive time of the year for gamers. It sets the pace for the rest of the year and first two quarters of the next – And this year, I think Bethesda said the most.

E3 is a massive specticle; a grand stage for all of the biggest of publishers and developers, showing off their hard work. Big conferences aren’t necessarily my thing, but all gamers are acutely attuned to E3. Love it or hate it, whether you think it does good or bad for the industry, it’s always a massive time of the year for gamers. It sets the pace for the rest of the year and first two quarters of the next – And this year, I think Bethesda said the most.

Don’t get me wrong – On reflection, there were plenty of great games announced. Personally, I was really excited for Bandai Namco’s portion, but found myself relatively underwhelmed. Nintendo announced a big announcement, but everything else they announced was relatively small (Although Mario Party for Switch was always going to be a welcome addition, along with a new Fire Emblem!) Hey, Microsoft and Capcom had an excellent showing too.

Whilst I will still be Tekkening away in the background, I found myself curiously eyeing up a franchise I’ve never touched before, which for me is rare. Then, I hear about a new iteration in a single-player franchise I’ve been playing a lot of recently. Next, I hear about a brand new IP and I hear about a sequel to a game I didn’t play personally, but got to watch Chris play on a regular occasion.

I won’t knock other developers and publishers displays so much – as many of them had interesting things to show and talk about. However, when it comes to a single company who can walk away with their head held high (and hype at their side), it has to be Bethesda to me. Again, other companies did well as usual, but this year in particular, Bethesda had so much to show everyone.

Yes, I mentioned that Nintendo did well and so did Microsoft and Capcom – But Bethesda gave us a massive list of things to be excited about. They are working on so many projects, it’s hard to believe they’d ever have the time for it all. Bethesda decided to reveal all of the cards in their hands and honestly, it’s one of the most exciting lineups I think I’ve seen in E3 – Possibly ever? 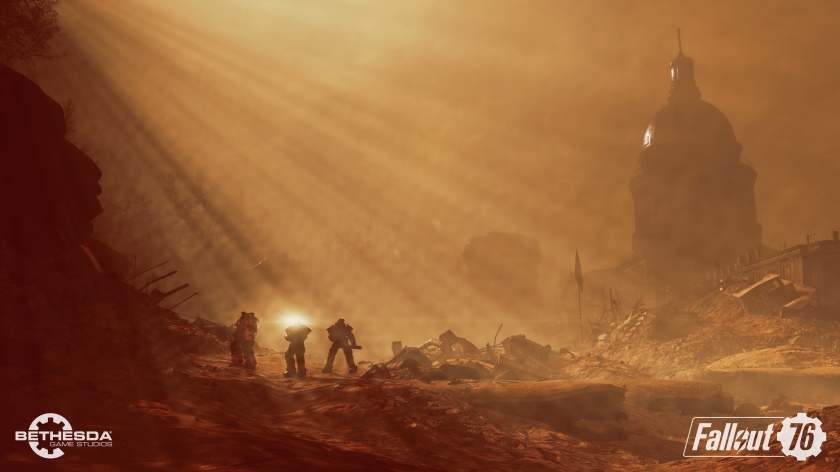 As an outsider to the franchise, the name of the latest title will forever baffle me, but Fallout 76 is an incredibly unique survival experience. Allowing for PvP, or for a unique co-operative experience, this new iteration appears to be a prequel to the hugely successful franchise. Every human you encounter, they say, will be a real person, but it’s not quite an MMORPG. No matter how you look at it, 76 appears to be incredibly ambitious.

Without sounding cynical, this is somewhat sounding like No Man’s Sky, insofar as that you will help shape the world. I say cynical, as I really enjoyed NMS, much to the chagrin of a lot of people. This being Bethesda however, I can feel that this will indeed be a lot more well shaped from the offset. I’m curious to see how well this goes, heck, I might pick this one up for the first time I’ve personally played a Fallout title!

Let me come outright and say that I don’t have too much to say about Starfield, except I’m excited. Bethesda understand story; they understand building a unique, expansive world. So when we take to space, will Bethesda know how to build a universe? I’m looking forward to understanding more about Starfield, so keep your eyes peeled for more information on this one.

Say what you will about mobile titles, but I personally go between mobile games like its no ones business. One genre I’ve never been able to get into on mobile is RPG, usually due to an extreme limitation in the UI. However, if one company understands RPGs, it’s gotta be Bethesda! The Elder Scrolls: Blades looks to be a First-Person RPG for mobile – I’m looking forward to reviewing this one after release.

Only Bethesda could create massive hype for a game by showing some mountains and not a lot else, but hey, if it’s where we all think it is… Then this game could get magical. This could very well be High Rock, although admittedly, I was looking forward to getting Elsweyr, as I love the Khajiit race. Nevermind, I certainly don’t mind going to the land of the Breton, as there’ll no doubt be some interesting adventures there.

Oh, but don’t expect this any time soon – Expect this after Starfield, so around 2020! I’d best go and finish getting all my Skyrim achievements, like I have been doing for the past few weeks!

This wasn’t everything. There’s a sequel to the amazing DOOM title released by id Software back in 2015 (id being part of the same company as Bethesda). There’s also going to be another sequel to the massively popular Wolfenstein, along with Rage and so, so much more. Bethesda had a great showing – and honestly, they entertained me from start to finish with all of their announcements.

But now, I pass this over to you – Did you also enjoy Bethesda’s showing, or did another company blow this out of the water? Let us know your thoughts in the comments below, or over on Facebook and Twitter.