I have mentioned in the past that I do not Cosplay, and I made mention of it as part of my panel on confidence building, that I have accepted that it is something I am not tempted by, and that there is nothing wrong with that. I suppose now i have to rephrase that, I have a selection of options on how to update my status, all of which are true:

In the build up to Amecon I’d spotted a couple of folks planning on putting together a Critical Role cosplay, and a group-meet planned for the Saturday. It was short notice, but one quick glance around my room and I realise that… actually, I had the pieces to put together a rather hasty Caleb Widogast. 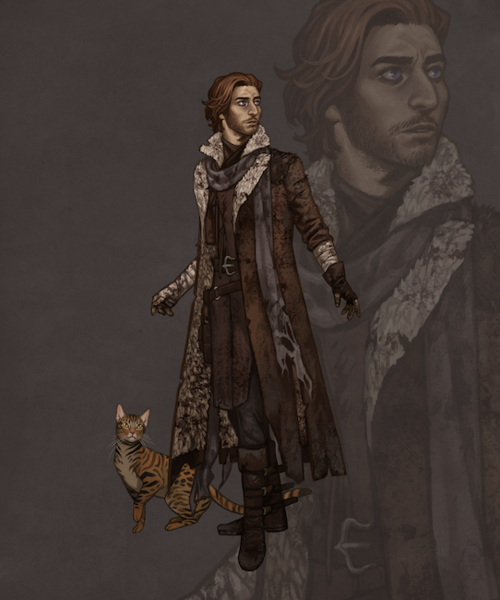 Liam’s character, the forlorn hobo-wizard, has so much appeal to me, skittish, a man teetering on the razor edge between villainy and nobility, wonderfully sculpted by Liam’s own penchant for playing a character so flawed that it cuts into his functionality as a game-piece. He’s also ginger, and wears a lot of brown.

Now, the layer upon layer of coats I could have worn would have been sheer murder on the Saturday in question, mercifully the heavens opened on Sunday (turns out they were mostly full of water at the time) and I could catch up with a few people and say “This is what could have been”, but black trousers, scuffed brown shoes, a brown waistcoat and cardigan over a white shirt, my wrists wrapped in bandages, a single fingerless glove, and a grey scarf made for a good start.

I asked my friend Sarah to do a hasty patch-up on an old leather bag to help it hold together for an afternoon, added a Garfield toy to pass for Frumpkin, forgot to bring one of my many leather bound books, and a few other lesser accessories, but also brought a heavy wax coat, that would have perfected the “drifter” look. Nevertheless, I still have my campaign notebook, complete with Matt Mercer’s signature and (badly) hand drawn D20 from his visit at Ayacon, a nice story to bring to a convention meet, and the plain black didn’t look out of place.

The greatest alteration made… I removed a beard that was nearly nine-months and a great deal of beard-related cosmetics in the making. Only recently had it learned the joys of beard-balm, now it was condemned to a Premier Inn’s plumbing.

Naturally I was outclassed massively by everyone present.

But come Saturday at eleven-ish, I found myself surrounded by Jesters, talking casually with a Percival, a Keyleth, an Allura, two Vex’ahlias, a Mollymauk, later to be joined by a Fjord, a brief appearance from a Scanlan, and a Beauregard with whom I shared a very intentionally awkward hug. 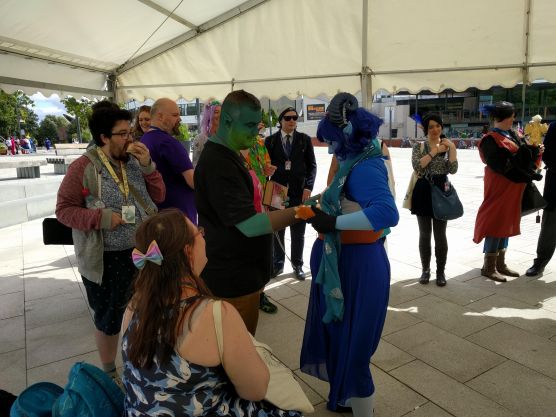 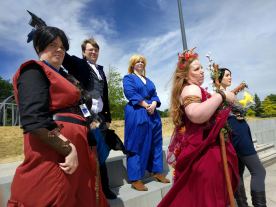 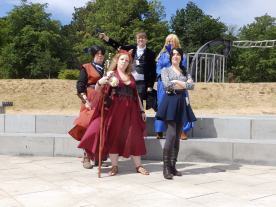 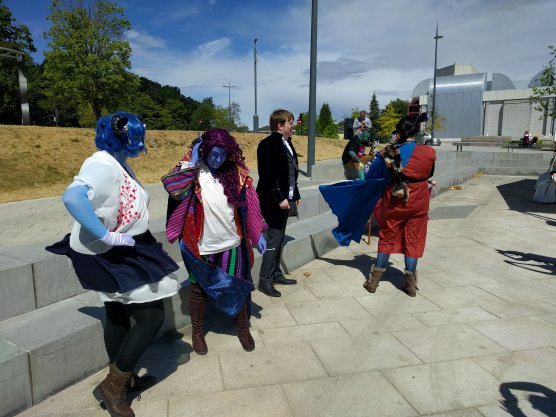 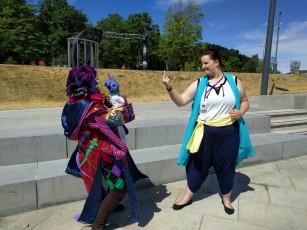 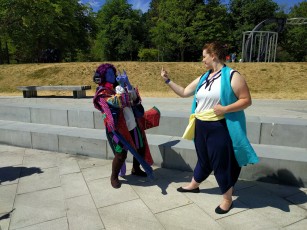 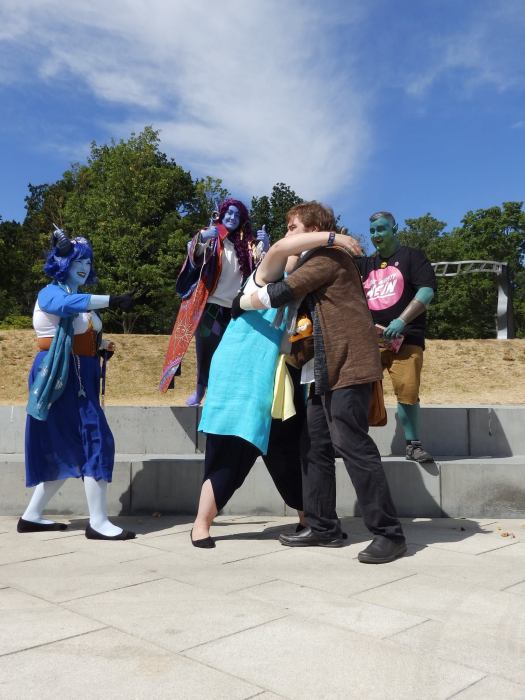 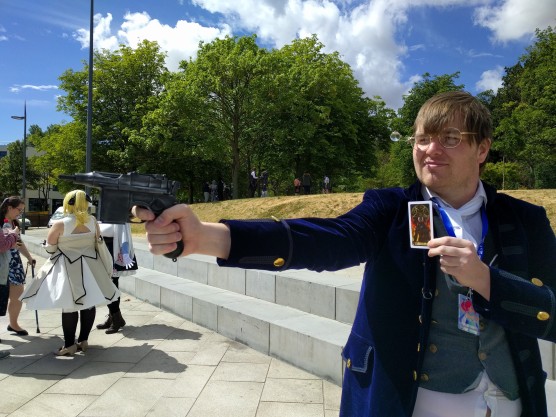 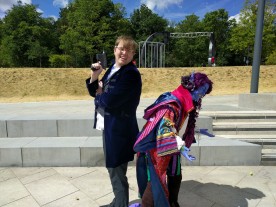 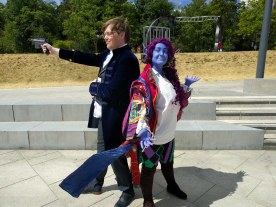 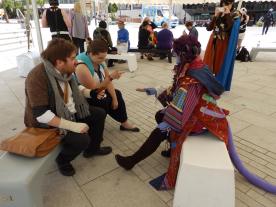 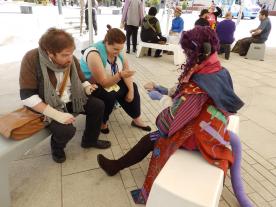 Our party’s Yashsa was typically not present, but showed up later for a short while, way to keep it in character! 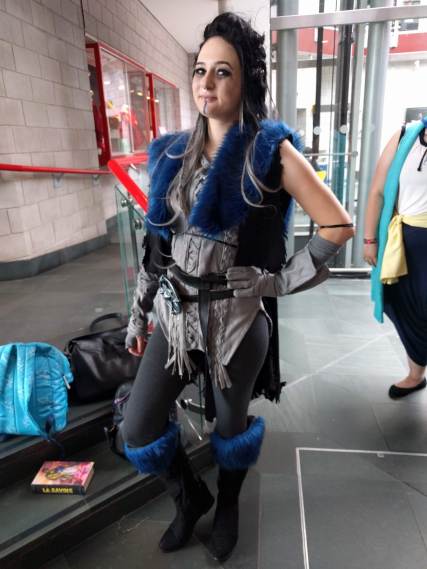 Later I encountered a group cosplay who were supposed to have joined us, they too looked amazing. 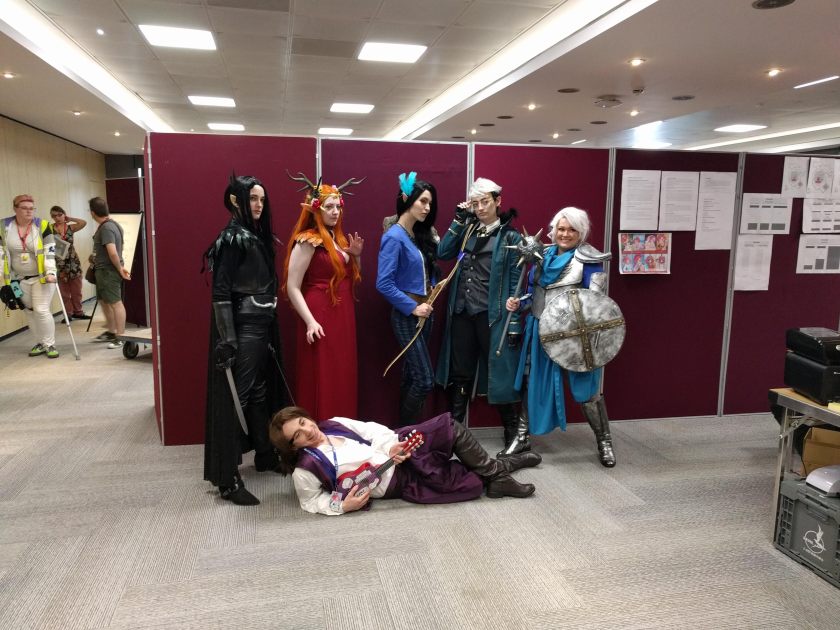 I do not cosplay. This is no longer true.

You guys were all truly amazing, I feel like I lowered the tone a smidge, with many of the others having constructed more elaborate props, committed to some serious body-painting, and actually made some garments, compared to my having grabbed some stuff together into a bag and shaved. Our resident Mollymauk earned a Judges Choice award for the sheer detail and wonderful embroidery on her coat, and it was richly earned (and timely), but despite looking like I’d walked into the middle of a group to ask for change and accidentally got picked up by the camera, it was fun.

I go to anime conventions because they attract all manner of fandoms, not least of which RP geeks. It was so nice to chat to you all, get a couple of photos, and feel entirely at home and relaxed in something other than a bog-standard t-shirt.

I look forward to seeing you all at another convention some time. Also, I suck at remembering names, be ready to respond to your character’s name being yelled at you.