A while back, I wrote about how Discord was taking the fight to Valve; the giants of digital video game distribution. Discord has begun to work on a variety of services which looks to bring the video game launcher experience to a more streamlined routine. Now that we’ve had the Game Store on Discord for around a month, I thought I’d share my experience with the store along with the launcher they’ve built. Finally, I’ll let you know if I think this’ll disrupt the market, or if Steam will sit pretty for quite some time.

A while back, I wrote about how Discord was taking the fight to Valve; the giants of digital video game distribution. Discord has begun to work on a variety of services which looks to bring the video game launcher experience to a more streamlined routine. Now that we’ve had the Game Store on Discord for around a month, I thought I’d share my experience with the store along with the launcher they’ve built. Finally, I’ll let you know if I think this’ll disrupt the market, or if Steam will sit pretty for quite some time.

The Game Store is actually really simple, really easy to understand and there are some benefits to being a Discord Nitro subscriber. If you’ve not heard of Discord Nitro, it’s basically your way to pay back for using Discord. In the past, you would get a few basic perks – Account-wide emojis, the use of animated profile pictures and so on. Discord Nitro was a pretty simple thank you from Discord, allowing you to pay back to the costs of the company running all of the servers. The price was pretty reasonable at just $4.99 per month (Approx £3.84 at the time of writing). When the Game Store was released however, the price of Nitro went up to $9.99 (Approx £7.69 as of the time of writing). They retained the $4.99 pricing under a new scheme, Nitro Classic, which effectively is the old Nitro service.

So with the price increase of Nitro, you are given free games. The list of games that you can get under Nitro were pretty varied and quite odd picks, in my view. FTL and Super Meat Boy, two indie classics sat alongside Rollercoaster Tycoon and System Shock Enhanced Edition. The game choices under Nitro are strange, but not to say they’re bad. Indeed, all four of the games listed above I am quite a fan of. So by having a Nitro subscription, you are given access to games, along with the benefits of Nitro Classic on top. Now let’s talk about the process behind the Game Store and how it integrates with other game libraries. 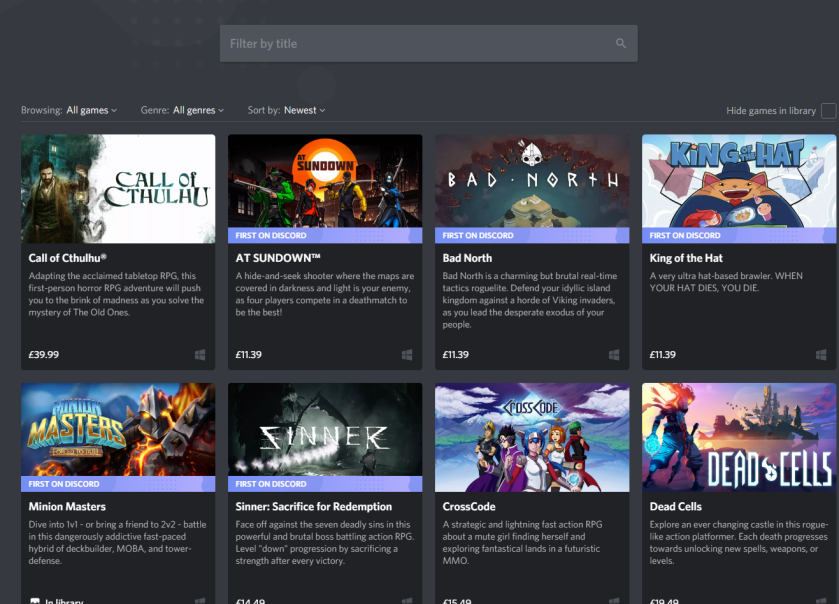 One warning: If you bought a game on Steam which is also in the Game Store, Discord will not then find that you already have it under another distribution platform. Indeed, it’ll simply look at the library of games you have – But it treats its own games separate to your Steam games. This is an important distinction to make, as if you are a big fan of a title on Steam, but then go to use the Discord Store, it may look like you haven’t got the game. Just remember to double check your Steam library if you’re not sure if you’ve already got it.

Now with that little aside out of the way with, let’s talk quickly about downlading a game via the Store. It’s simple, it’s really simple. Indeed, if you want to pay for a game via Discord, then you simply click on one of the Game Store icons and it takes you to a page about the game. However I’ve yet to be compelled to buy anything through the store, as I’ve found prices either match Steam, or are more expensive. An example is in Hollow Knight, which costs £10.99 on steam, or £11.39 on Discord. This isn’t a huge difference, but it still works out more expensive when, really, it’s a game that’s been around for a little while now.

So I managed to pick up a game for free on Discord, Minion Masters. Whilst I don’t have too much to really say about the title, I will praise Discord for being so open with where the files are installed. If you install a game through Discord, by default it’ll go to C:\Users\[windows username]\AppData\Local\DiscordGames – You can set this to install the games in different folders, should you wish to. Downloading the game was quick, as I managed to hit a peak of about 18mb/s, which isn’t too bad. All in all, downloading a game and being able to play it was really very simple. The screenshot above shows how simple the library is.

Those of you who have been keeping up with my gaming adventures will know I recently jumped onto The Elder Scrolls Online as my latest game. I installed that via Steam – What’s nice is I don’t need to boot up Steam for Discord to know it’s there. When you first go to use the library, you need to give it the permission to search for games, but once it’s found games, you can launch it through Discord. What this means is that if you haven’t got Steam open, it’ll boot it up. You can even add games like Overwatch, which is normally accessed via the Blizzard Launcher – Discord then basically tells the Blizzard Launcher to wake up and boot right into the game. The library is genuinely faultless – I love it!

All in all, I’ve been impressed by the Discord Games Library, but not so much by the Discord Games Store itself. I feel that there is a long way to go before it can genuinely compete with Blizzard, as I feel the titles it’s gotten to begin with aren’t hugely impressive. There are some excellent games, do not get me wrong, but if Minion Masters is a title to go by the moniker of “First On Discord”, then they’ve got a long way to go before it’s taken seriously as a platform for growth. Furthermore, the price of games is a little expensive. If you were serious about trying games on the platform, I’d recommend going for a Discord Nitro subscription, but that’s only if you see that they have some games you’ve yet to try. At the cost of $9.99, it’s not that bad

If you’ve got a bunch of games in a bunch of locations however, do use the Discord Games Library. That’s an excellent tab that, seriously, has saved me some extra clicks here or there. It’s nice having them all in one place. Now it’s over to you – Have you had a chance to use the Discord Games Store or Games Library yet? What have your initial impressions been? Share your thoughts below, or over on Facebook and Twitter.

2 thoughts on “First Experience of the Discord Games Store”