So I have been playing a lot of D&D lately… I mean a lot of D&D, so it’s time to resurrect my idea-spitting series Dungeon Situational, where I drop a bunch of thoughts on screen in the hope that someone, somewhere can use them, or at least warp them into something useful.

This week I had Murray take a look at the thirty-something strong idea list, and has chosen a unique tavern, it’s occupants, and a short menu. Welcome travellers, to the Stricken Willow.

Except for the wicker roof, the Stricken Willow may not look like much from outside. A typical travellers inn, a two storey building of wood and stone, wooden shuttered windows shedding lantern light across the overgrown path at all times of day and night, an old man seems perpetually sat on a barrel outside with a reeking pipe to his lips.

Inside a stranger is immediately struck by the bar, a log made flat and smooth, sections laid end-to-end but left irregular and covered in bark on one side, and on the other, a long and jagged burn that seems to have split the original tree. The blackened wood runs jaggedly through the pristine counter-top like a lightning bolt, and the smell of burned wood permeates the building above the stale alcohol and the sweat of the patrons. 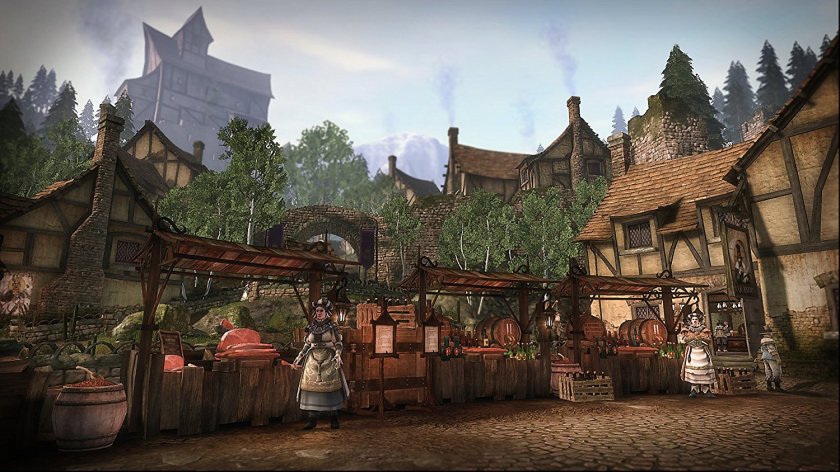 The low ceiling is decorated with axes and assorted hunting trophies, not all the heads of animals, but bloodstained arrows, swords, bound nets, each seemingly carrying a story of glorious victory with them. Above the perpetually blazing fireplace is a panel of polished wood, carved with names.

Withik, the publican and landlord is a proud and joyous man who loudly welcomes any new face that walks into his establishment. He’ll try his best to offer everyone the right drink for them when they walk in, and prides himself on knowing the drink of choice for all of his regulars. He only ever retreats behind the bar to cook, as he is the specialist in the kitchen, at which point he hands off to his brother Bohol.

Bohol is a different animal altogether, taciturn and quiet, he seems clumsy and forgetful, service slows when Bohol is behind the bar. They are visually similar, there is no question of relation, they have the same nose, same jawline, and are losing their hair at roughly the same rate, but where Whithik is a ruddy faced and heavy set man, Bohol is smaller and paler, and looks like he hasn’t rested in a long time.

The Stricken Willow is a first-job for many of the young people in the village, who spend a year or so tending bar and helping clean rooms, sweep and polish, maintaining the quality of welcome that locals have grown used to.

Brant – The old man sitting outside is the kind of local known as a “local institution”. He has no family that anyone knows about, no friends except that the village is mostly friendly to him, and he is perpetually sat out front of the Stricken Willow smoking the same foul smelling herb, shouting cheerful but incoherent greetings at people.

Uhla Cammut – An enormous and muscular woman who drinks with a gaggle of suitors, all of whom – Withik says – she has rebuffed and declined, and in one particularly insistent case, beaten senseless. Nevertheless, she entertains all who sit with her with stories of fights, and hunts, and the tales her father told her of a more glorious time for her family.

Volurr Whitesweed – Perhaps the only halfling in town, Volurr gambles with any who’ll play him. He is also a merciless cheat and grifter, but he’s open and honest about it, and warns anyone who sits at his table that they’re in trouble from the moment they set down their coin.

Dollop – Hanging from a rafter there is a green slimy entity. Patrons occasionally feed it cups of Black Barrel, and after a short while the cup drops to the floor cleaner than before the ale was poured. Nobody wants to remove it.

The Willow has eight rooms, four private rooms for up to two people sharing a bed, each costing 2 gold a night with a meal thrown in. The other four are capable of sleeping up to six in bunks, they also cost 2 gold but no food is provided. The private rooms can be locked with a key, where the shared rooms only have a heavy bolt on the inside. 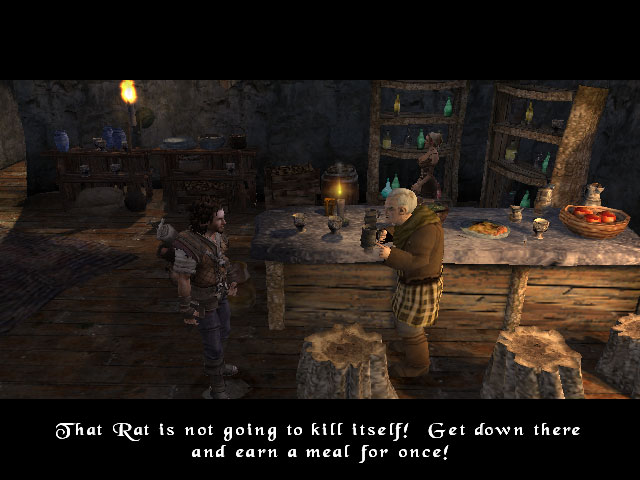 Sweetbreeze Mead, 1 silver – A saccharine mead, lightly spiced and a little sticky. Nursing a cup may result in it becoming stuck to the table, or having to peel one’s lips from the rim after a sip.
Trunk, 2 copper – Cider, sour and potent, spillage results in unpleasant stains, the remnants of which are visible on every table and across the floor, but nowhere to be seen on the bar.
Black Barrel, 4 copper – A dark ale that seems to do the work of a small meal for those hungry enough.

Chicken Stew, 2 copper – Salty and overcooked but filling. The stew is kept in a constantly bubbling cauldron near the fireplace.
Pork and Apple, 5 copper – A thin but delicious chop of pork belly served griddled with apple and onion.
Gourd, 3 copper – Half a squash roasted with vegetables, glazed with mead that lend a sweetness.

Uhla and Withik are a succubus and incubus respectively, their good cheer and warm attitudes are a well crafted veneer designed to keep people at their seats and drinking. The entire building, with its raucous and welcoming atmosphere lull the unwary into a false sense of security so that they can be comfortable enough to stay the night. Only Bohol is aware of this, and he stays quiet, kept like a pet by them both, browbeaten but with no reason to leave or to speak up, as his life is strangely adequate.

The children who come to work are vetted, as are powerful strangers, any who might be goaded and recruited to sew discord and disquiet around the world are plied with food and drink, and encouraged to spend a night so that they can have their minds bent to shape as they sleep. Demon cults are numerous in the surrounding wilderness, and many are begun by runaways and travellers who have spent a few nights at the Stricken Willow.

Alright, let’s keep this train rolling. Every time I bring back Dungeon Situational I let you decide on the topic for the following week:

A wizard variant whose power is drawn from the twin paradises of Bytopia, including a spell list and a subclass.

A unique monster, a creature of myth and legend, complete with story and stats.

Or some spell components that augment the spells in which they are consumed.