Ever find yourself going back to an old game and going “why am I here again?” Perhaps an hour in, you remember how much you loved this old game? Yeah, this happens to me too. Here are some thoughts about nostalgia and returning with a newly critical eye changing your gaming experience. Years ago, you played a game and you loved it. It was arguably the only game you spoke about during that time. Perhaps you were massive in Overwatch when that first came out, but now have drifted away? What about Magic: the Gathering Arena? Minecraft, anybody? Ultimately, you were really into that game for a long time and you’ve sinced moved on. Something’s happened and now you find yourself booting the game back up. Video games are pretty fluid like that; one moment you can be sick to death of a game and another day, you want a rush of nostalgia to hit you again. This has happened to me recently and I have a few thoughts on the process behind it.

A Welcome Wave of Nostalgia 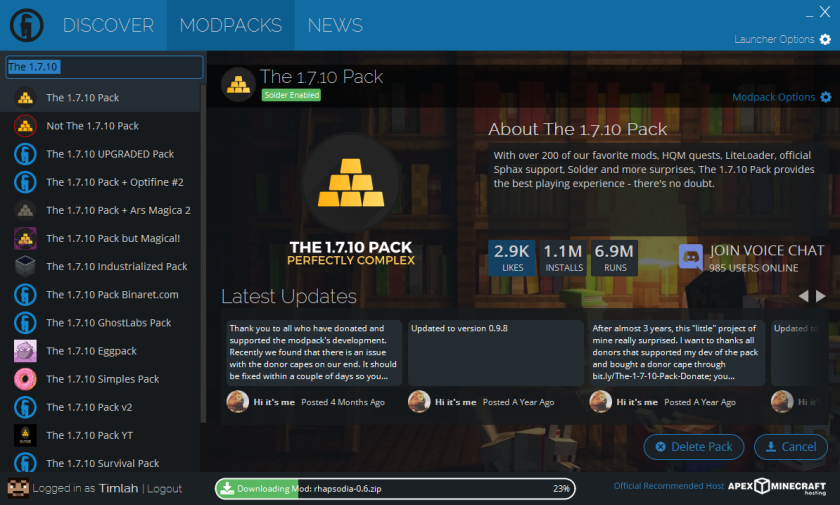 Alright, so you played a game and you loved it for a long time. In my case, it was Minecraft. But then I moved on; I went into Tekken 7 for a long time, as well as Clone Hero and most recently my game of choice is Elder Scrolls Online. But, deep down, I still love Minecraft. If someone has a conversation about the pixelated world, I’m still interested in it. I still want to know about how people built their most recent recreations of the Death Star. I want to know about what strange mechanics people have found using redstone, or what the most recent mods were. So, one day I had nothing to do, as I needed some time away from Elder Scrolls Online – and I found a modpack.

The modpack, called The 1.7.10 Pack, features a bunch of well-updated, interesting mods. As far as I can see, it’s one of the more updated modpacks out there and there’s a lot to see and do, with a lot of forks of it (a fork in this case being a derivative of the original modpack). It was great fun, picking up with a lot of familiar mechanics, as well as getting thrown in the deep end with new ones as well. Those who know me and Minecraft know I spent most of my time on Tekkit and TekkitLite. It’s been a pleasure playing something so different, with quests! Quests in Minecraft, who’da thunk it?

Nevertheless, nostalgia is a good reason for why we shouldn’t keep revering games from our past. Some of the gameplay of the past may have been fresh and novel then, but should we fixate so hard on what made an old game so good? After all, it’s clear that advances in technology, game engines and more are some of the reasons the industry moves forward so often. It’s also hard to replicate that experience you had when you first enjoyed a thing. Video games are pretty mad at the moment for having rereleases, or a remaster – When really, as with most things, we should focus on building a new future for our industries.

But, when you do go back, trust me, it feels great. It’s a well covered topic, why nostalgia is such a powerful tool, especially in video games.

There are plenty of reasons to want to go back and play a game from your past and trust me, nothing has beaten that feeling when I picked up Clone Hero again recently, where I was able to finally beat a song I couldn’t beat a year or so ago.

When you get to go back and view things from a wiser, more critical eye, trust me, you should get to have the experience you want. When you go to replay a game though, don’t fall into your usual status quo of following the same old patterns. Instead, find something new, or different. Play the game from a new perspective; if you’re usually a sniper in an FPS, why not go for a roaming type of character? If you play games like Minecraft, instead of building that mud house you always build, start with an idea of how you can get yourself a nice house right from the get go?

All in all, there are plenty of reasons to go back to old games. Nostalgia shouldn’t be the only reason. Go back, play games you loved and revisit them with a different perspective. If you’ve ever had an experience like this, share your experiences in the comments below, or over on Facebook and Twitter.