Ever since their introduction in the original Innistrad block; double-faced cards have remained a very popular mechanic in Magic: the Gathering. Today, our guest Murray shares his ideas for a different type of Planeswalker card. 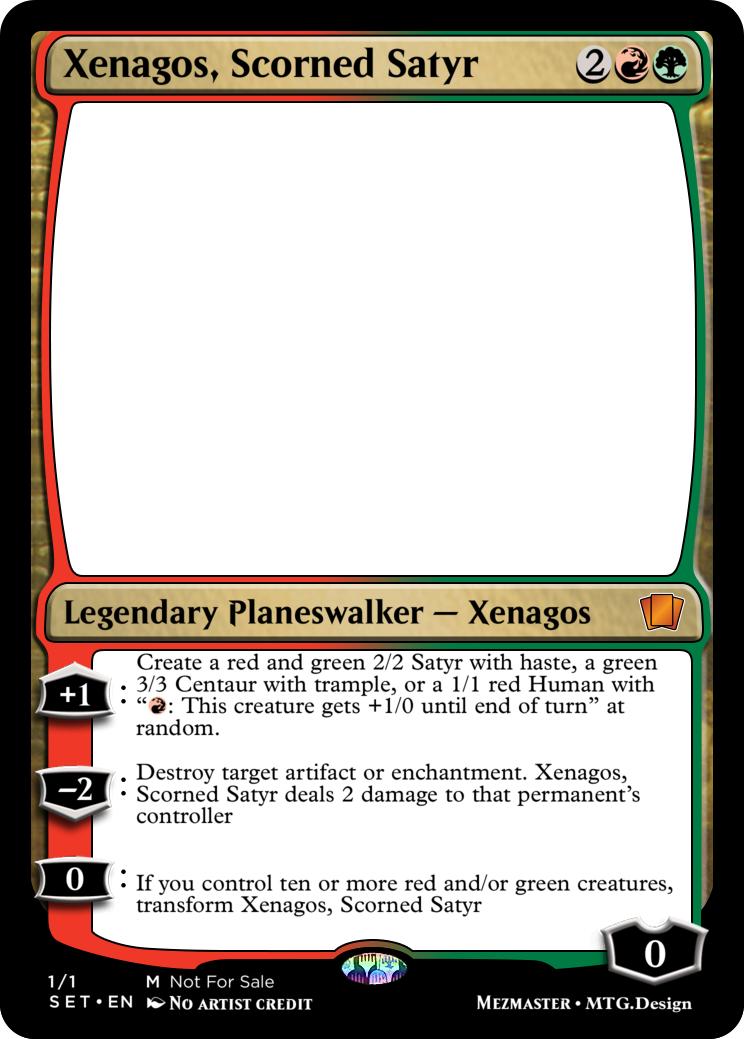 (Foreword: Thanks to Joel for hearing me out on this idea one night and helping develop it. These theoretical card designs were created using mtg.design)

Ever since their introduction in the original Innistrad block; double-faced cards have remained a very popular mechanic in Magic: the Gathering. To date, we have got:

The penultimate entry is one for discussion today, because I want to test the idea of a Planeswalker that can become not-a-Planeswalker.

Thematically, a Planeswalker is an individual who is gifted with a “Planeswalker spark”, an innate ability that allows them to travel between planes. Within the story there have also been instances of Planeswalkers giving up their spark to achieve various goals, so, a Planeswalker card that becomes something else can work in game.

I’m going to work with an example that happened in the story itself, the ascension of Xenagos to Nyx.

Gods in Theros are born and sustained by the belief of their followers. Xenagos ascended in the aftermath of a large celebration (or Revel, to be accurate), and more revellers joined in as time went on. Using this we can have the plus ability on our theoretical Xenagos create token creatures to reflect the Revel growing larger.

The obvious choice here would Satyrs, but creatures of all forms joined in the Revel, so the potential ability could read as:

As the Revel goes on, Xenagos’ power grows, and he gains more followers. And as more individuals join, the likelihood of something (and/or someone) getting broken is going up. Thankfully, the card “Destructive Revelry” gives us a pretty good idea of what this looks like, Planeswalker abilities have been known to mimic spells before, which gives us a minus ability:

Finally, we need to have a way of transforming Xenagos. His ascension happened when the Revel reached a critical mass of followers, so we need to be able to represent this in an ability which should also interact with the plus ability.

With all abilities lined up, we can now figure out what the mana cost and starting loyalty should be, though personally I feel keeping to original Xenagos’ layout of 2 generic mana, a red mana and a green mana with a starting loyalty of 3 works pretty well. The flip ability doesn’t require loyalty counters so they are purely there for survivability and using the minus ability every so often. 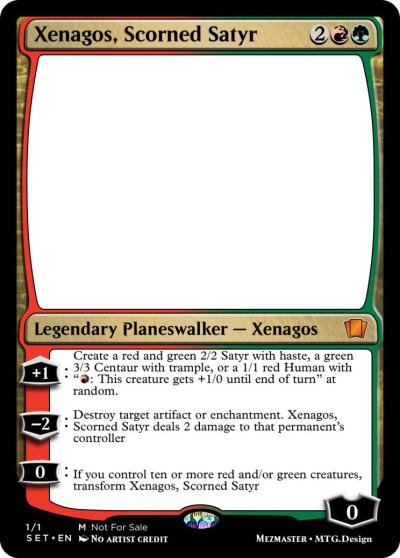 Having now taken his place amongst the pantheon; Xenagos has gone from Planeswalker to a more fitting “Legendary Enchantment Creature – God”.

As is expected, his first line of text is “Indestructible”. All Gods in Magic have some way of sticking around or surviving removal effects, and the most straight forward one works here.

With already existing Theros gods, they use a mechanic called “Devotion” (the amount of colour mana symbols on cards totalled together) to determine whether a God counts as a creature. However, the previous side of Xenagos has been pumping out creature tokens, which have no coloured mana symbols on them meaning no progress towards devotion.

To maintain the flavour of Gods needing a pre-condition to counting as a creature and making it so the mechanics of the previous side interact, a new mechanic can be proposed:

“Following: Your Following count is equal to the number of creatures in the specified colours”

So, the second line of text on our new Xenagos can read:

“As long as your Following to red and green is less than ten, Xenagos isn’t a creature”

This allows Xenagos to act as a creature from the get-go, as he had already gathered a required Following in order to ascend. Now he needs to have an ability that interacts with the heavily populated board state, and manifests the ideal of the Great Revel.

“At the beginning of your end step, create a red and green Eidolon enchantment creature token if five or more creatures dealt combat damage to a player. It has “This creature’s power and toughness are equal to the number of creatures you control.”

An ability like this gives an ever-increasing payoff to a go-wide strategy, which reflects the rituals that Xenagos performed during his ascension, bringing Nyxborn entities into the mortal realm.

And, as with Scorned Satyr, I’m keeping this Xenagos in line with his existing counterpart by making his power and toughness 6/5. 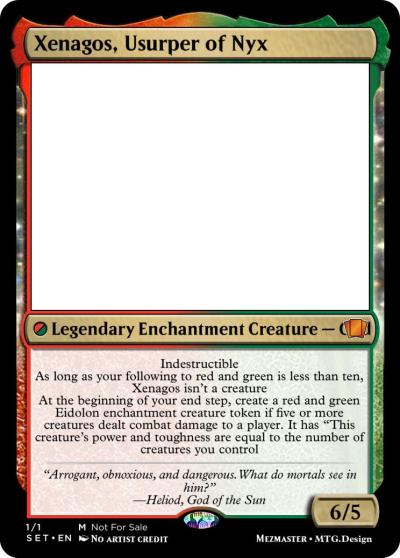 So, that’s my proposal for a Planeswalker that has the potential to flip into something else. It’s most definitely unbalanced and requires refinement, but as a dubious design, it fits the title quite nicely. Please feel free to give any feedback, both mechanically and flavour-wise on how the cards turned out.

Huge thanks to our guest contributor, Murray, for sharing his ideas of a new Magic: the Gathering card type. If you’re an avid Magic: the Gathering player, does the proposal make sense to you? Have you ever come up with any unique ideas for cards in any trading card game? Share your thoughts in the comments below, or over on Facebook and Twitter.