When I first picked up Doki Doki Literature Club, I knew the sort of wild ride I was going to get into, thanks to…
… Just Monika.

When I first picked up Doki Doki Literature Club, I knew the sort of wild ride I was going to get into, thanks to the surge of popularity the game enjoyed on release. I played this a while back, so coming back to it now to review feels almost nostalgic. I noticed I somehow never reviewed the title back then and I wanted to at least review it once, especially now the hype is done. After all, there are still recommended videos on my YouTube feed, all to do with this seemingly innocuous title. So what makes Doki Doki Literature Club so good?

WARNING: If you don’t mind spoilers, watch the below video!

WARNING: If you don’t mind spoilers, watch the above video!

You have to join an activity club of some kind; so after you get harassed by your friend Sayori, you join the Literature Club. The club is pretty small, featuring Sayori, Natsuki, Yuri and Monika… And now you! As the newest member of the literature club, the girls really want you to read what they’ve written. There are memorable stories throughout, as well as oddly adorable backstories for each of the characters…

If you came into this expecting it to be some masterpiece in gameplay, I hate to break it to you, it’s not. Instead, you’ve really come to this game because you wanted a well crafted story. Without trying to give away any of the plot points of the game, I’ve left it intentionally vague. Nevertheless, we may as well touch upon elements of gameplay that make this game so well loved.

The game plays like your typical visual novel; I.E you have a limited number of selections to make. Your choices can affect a couple of parts of the game. You may find yourself trying to woo any of the four girls, but no matter what, the game will continue in the intended way. It’s a fairly linear story, with only a couple of choices for you to make. However, each of your choices present an interesting visual cue of some kind.

There are minigames to be played through, where you try to pick words that’ll be best received by the girl you like the most. Pick carefully now! This game also likes to mess with its inner workings. 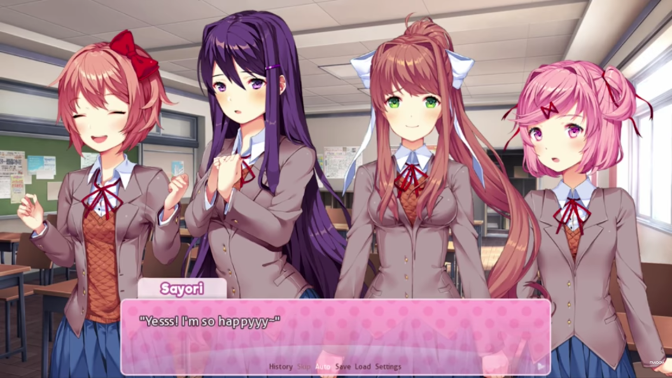 If you’ve ever played a visual novel before, you’ll know it’s going to be heavily influenced by anime and Doki Doki Literature Club is no slouch in that department. The game has beautifully detailed character models with a nice variety of different expressions. The backdrops are all well detailed and really adds to the atmosphere of the game. Basically, if you like anime-styled graphics, you’ll love Doki Doki Literature Club.

Finally, the audio of the game really helps to tell a story. Each girl has their own theme, all of which helps to tell their story in a meaningful way. Audio is used in a way to make you feel the emotions that the game wants you to feel. The theme tune for each girl has a special little bit to it, representing the girl in a surprisingly clever way. Trust me, until you play through the full game, you don’t even appreciate these tunes. 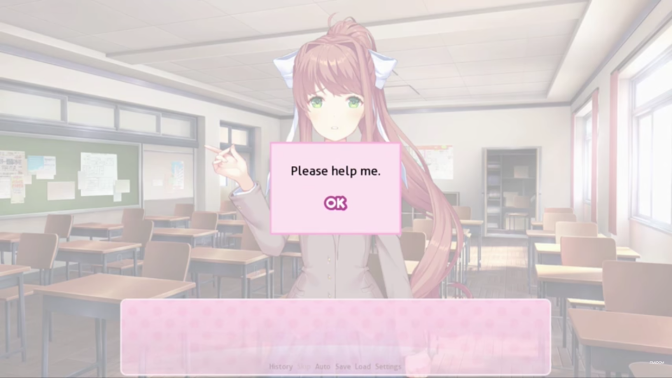 I didn’t want to say too much of the story, as this is a visual novel. Visual novels require people to go in relatively blind and I’d say this is a great game to walk into without knowing anything about. If you can’t get your hands on it, I highly recommend watching a play through, but please note that the game has some themes some viewers may find unsettling…

… Actually, I take back what I just said. You should go and play it, regardless…

… Ahem, not sure what happened there, but before I delete this review, get out there and play it. If you’ve already played Doki Doki Literature Club (Which makes sense, the game’s been out for a while), share your thoughts with us. Is Monika the best girl? Is it Just Monika?