SummerSlam 2019 has now come and gone. It was a night filled with very few title changes, although a major one changed. We also saw a couple of non-title feuds, which I’m honestly a big fan of. Sometimes, I prefer to watch an angle between people who just want to get to one another; take the current storyline between Kevin Owens and Shane McMahon for instance. Great stuff… But there is one story that I think will have people talking for arguably years to come. 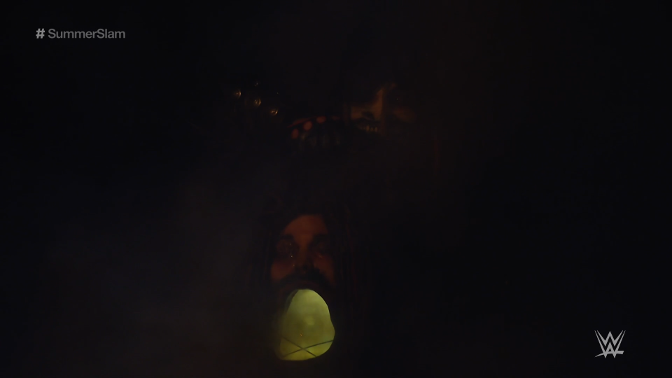 SummerSlam 2019 has now come and gone. It was a night filled with very few title changes, although a major one changed. We also saw a couple of non-title feuds, which I’m honestly a big fan of. Sometimes, I prefer to watch an angle between people who just want to get to one another; take the current storyline between Kevin Owens and Shane McMahon for instance. Great stuff… But there is one story that I think will have people talking for arguably years to come.

Introducing The Fiend, a character that’s been created by the former Eater of Worlds, Bray Wyatt. The Fiend is a character where all of Wyatt’s emotions can be poured out. Whether it’s to hurt or to heal, this character is violent, twisted and all in all, a brutal reminder of how cruel the world can be. This is exactly what the world of wrestling was missing; a character so filled with theatrics that you can’t take your eyes off it.

Let me give you a bit of a backstory.

Bray Wyatt was always a pretty ‘over’ superstar; people loved him in the Wyatt family and I think most fans wanted to see him do better. It’s not like he was unsuccessful either, as the cult-like leader found himself with tag titles and main titles alike. His faction, The Wyatt Family, was the first real opponent for The Shield and I’d go so far as to say that they were, physically, one of the most imposing factions out there.

Over the years, Wyatt would talk more and more, which made people sort of switch off. It’s not that Wyatt himself was a problem, but rather how poorly the guy was ‘booked’. He spoke a big game, but didn’t have the win-loss record to back it up. Couple this with the fact the guy

clearly loves the business, evidenced by some of the atrocious stories he was put in, you basically had a guy who’d lose, make someone else look good, but in return be forgotten about. A shame.

Late 2018, Wyatt suffered an injury, which meant he needed some time away. It was at this time that he decided he needed a character change. But he needed props, he needed something to ensure this idea would work. So Wyatt, being the type of guy he is, reached out to Tom Savini, a man famous for making some of horror’s most famous masks, including the Jason mask and some props for Evil Dead. Savini loved the ideas he was presented with, so was only too happy to comply.

These ideas were pitched to WWE and the company knew they had to give him creative control. There was a lot of ideas, a lot of strange details that Wyatt put into everything. From hidden messages to remind people of the past, to specifically chosen words, when he returned, Wyatt told his fans: The old me is gone. Nothing cemented this more than his SummerSlam 2019 repackaged debut.

The Fiend with his replica Bray Wyatt head

The Bray Wyatt head was grotesque!

Out comes The Fiend, carrying a replica of his old head, jaw stretched open and bloodied, acting as a lantern. This was a visual metaphor unlike any other, a damning, terrifying image that will surely leave a lasting impression upon the viewers. I’ve been following this character closely and for all of the faults of the WWE, this is one of the times when they got it absolutely right.

The costume worked in the ring. The new finisher was much more violent and psychopathic, as well as it being a wrestling throwback (the Mandible Claw, which was passed down to him by WWE legend Mick Foley on an episode of Monday Night RAW). The theme song had been updated; It started with the happy side of Wyatt, the Firefly Fun House host, then it scratched out and his old theme tune played, remixed into a more sinister metal theme, with the words “Let him in” being screamed out and “Hurt, Heal” at several points.

The Fiend has been let into the WWE and into the hearts of wrestling fans everywhere. From the visual effect of the severed head lantern, to the terrifying use of the mandible claw, wrestling has gained a character that hasn’t been seen, arguably since the arrival of The Big Red Machine, Kane. If they keep this level of production up, this is the biggest thing they’ve had in years… And all it took was one man who wanted to reinvent himself.

Unfortunately, WWE cut out a lot of the entrance, as a way to get you to go to their Network, but trust me, the whole entrance was one of the grandest things I think I’ve ever seen in wrestling. What do you make of the stunning, albeit disturbing visuals? Can you think of any horror characters that had to undergo a metamorphosis quite like this? As ever, share your thoughts with us in the comments below, or on Facebook and Twitter.