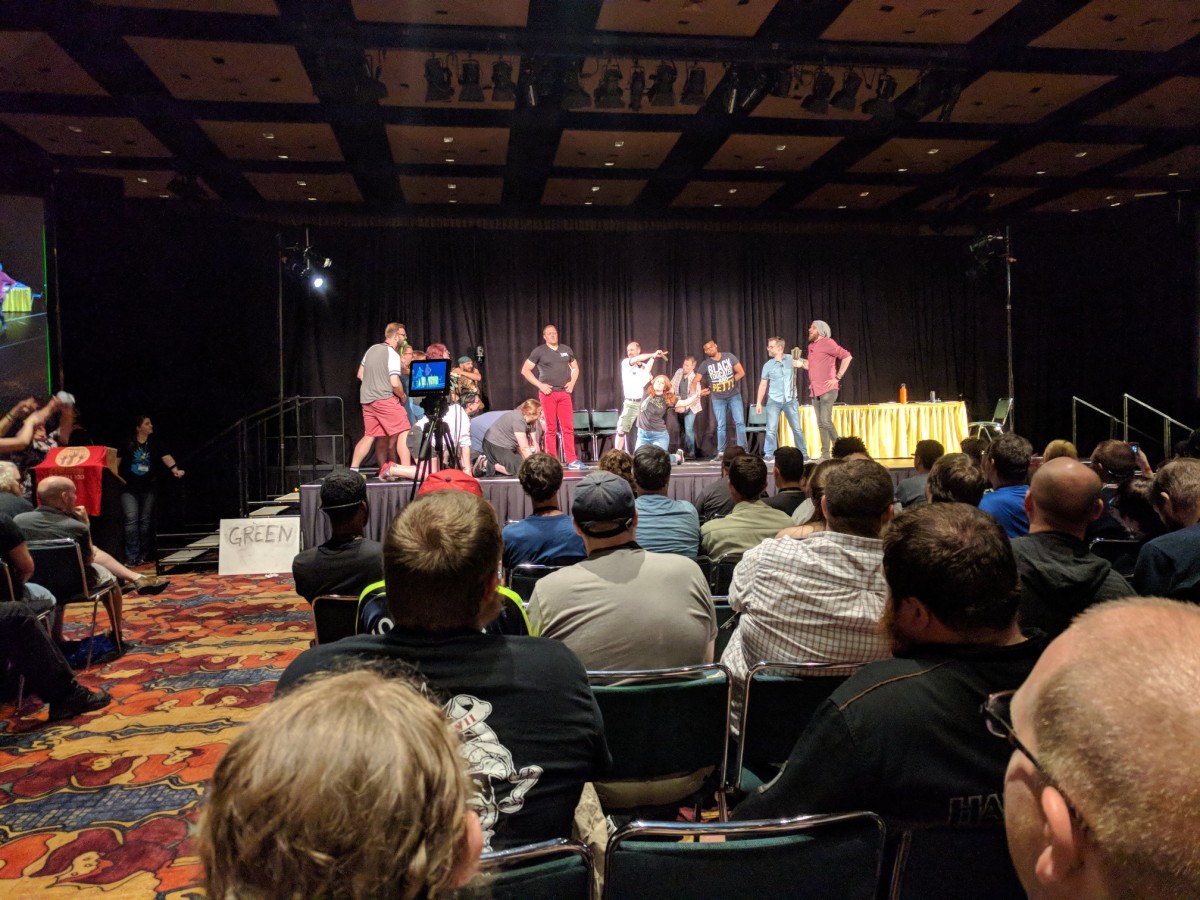 Ok, last article about Gen Con* or I’m not coming off the subject until October and frankly I’ve got some other stuff wants writing sat in my to-do pile, but this one’s a big deal for me.

Regulars here know I have a particular fondness of the works of Zombie Orpheus Entertainment, more specifically The Gamers film project and it’s miscellaneous spin-offs (like Human’s and Households, Natural One, and so on) and Journey Quest which has just had it’s fourth season renewed via kickstarter. The fan supported studio creates comedy for nerds, and I’ve been watching and supporting them since I got into the hobby over ten years ago. The chance to get to meet some of the faces who have inspired my passion for the hobby was something truly incredible.

I totally played it cool! I totally don’t have a Gamers: Hands of Fate poster on my wall with their faces on it…

This means I got the opportunity to finally see their live show that has been a Gen Con staple for many years. Aping the format of the Gamers films that take place both in and out of the game world with overlapping narratives, the live show not only manages to balance both sides – switching from one to the other with the ring of a bell and a lot of running backwards and forwards – but is almost entirely improvised. The performers have their characters determined by the audience, and like a real role-play, much of the outcome of the game is determined by the roll of a dice. Audience members are also conscripted to act as props, NPCs and enemies. 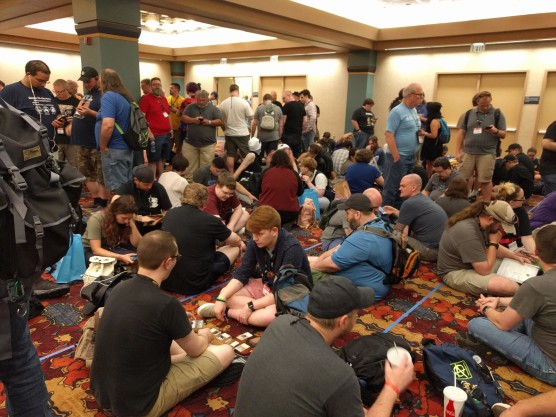 DM Christian Doyle (perhaps best known now as Perf the failed wizard) played Gary, his slightly unhinged character from the Gamers, who ran a Mad-Max-esque game featuring a sparkly rage mech pilot, an excessively wise and beardly wizard, an enthusiastic fire-dog, and a severely out of place paladin- oh, and whatsisface, oh man, the IT consultant…** Anyway, they audience, led by Matt Shimkus (Rogar the Barbarian), deftly played the parts of various enemies throughout their adventure, with success or failure governed in part by the roll of a dice, and modified by the enthusiastic members of the audience who had been given action points, that could be used to add or detract from the dice result.

I’d watched a show or two at home on YouTube, it’s nothing compared to the experience of seeing it in person. From the moment I joined the queue of people clamouring to get in, I was already enthralled, watching the cast members casually wandering back and forth and chatting with us all, it’s a wonderfully engaging experience that I hope to repeat one day.

So, when I first found my way to the Zombie Orpheus stand I had a lovely chat with producer Cornelia Moore who asked if I’d like to go to a test screening of a film that, while featuring a lot of members of the ZOE team, isn’t formally a Zombie Orpheus product, ALT. There’s not an awful lot I can – or particularly want to say about the film except that I enjoyed it, and that I am going to make a point of leaving a link to the film’s website here.

The film is a dimension hopping pursuit story set in 1999. I loved the composition, the direction, the paced reveal of details that unravel the mystery piece by piece, a steady drip feed of information that draws you along the narrative. I won’t pretend that ALT is without flaws, no film is, and I wouldn’t be much of a critic if I let those flaws slide, and we were asked for thorough feedback. But keep your eyes peeled, because this has more than just potential, it’s already good, and if you get the opportunity to watch it, it’s well worth your time.

Led by Chris Ode, the Q&A and miscellaneous chat and conversational tangent panel was one of the most relaxed panels I think I’ve ever been part of, with cast and crew wandering in and out, taking up seats either at the long table or somewhere along the side from where they could more easily heckle. Highlights included the banner, signed by the Dungeon Masters and players who helped playtest a new RPG system based on the ZOE series Demon Hunters, a gift for the crew as a thanks for all of their hard work. Christian Doyle came in, voice hoarse, was presented with a necklace of Chibi Chan ears, and left shortly thereafter because Gen Con is a busy time, and they all have stuff to do.

Among the more memorable questions asked, how can someone help support Zombie Orpheus projects when you simply don’t have the money to do so, and emphatically the answer was to spread the word, to watch, and to show other people via whatever platform you have available to you.

So that’s what this is. Meeting some of the people who inspired my progress through the hobby and got me to where I am today is incredibly gratifying. I have a fresh page in my notebook that’s got most of the Gamers: Dorkness Rising player’s autographs in it (not complete, coming after the rest of you in time, though it take me a thousand years), added to the collection of other people I’ve met over the years. Of all the things I took from Indianapolis, that’s the part that means the most to me.

*With thanks to Randall Porter for correcting my typography here, Gen Con, not Gencon. We’re sticklers for our GeekOut spacing and capitalisation, so it’s only right we uphold our own values.

**The joke here being that not even Gary knew the guy’s name, that classic awkward social interaction we’ve all been through. See, it’s funny when they do it, it doesn’t translate so well outside of context.