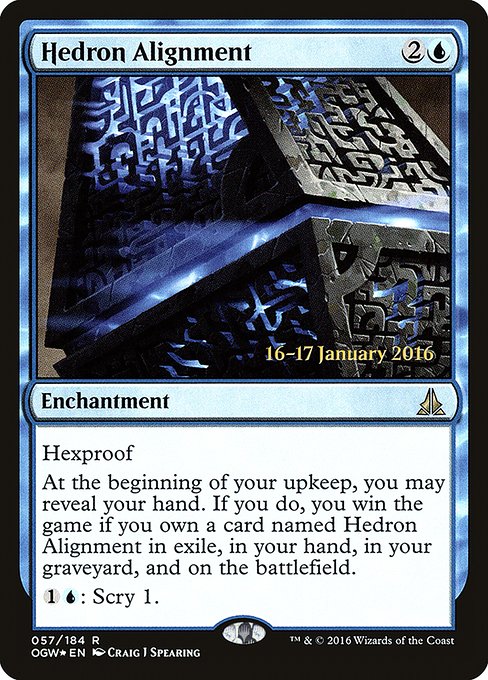 “How To” videos for Magic are in high demand right now, with Arena being featured as a sponsor for a lot of YouTube series right now. Well here’s one I’ve yet to see, one we’ve yet to address, and one that’s actually quite interesting.

The basic rules of Magic are astonishingly easy to learn. Your opponent(s) and you have a life total, and from your deck you draw the resources and tools you need to get rid of the opponents’ life and keep your own, and the last of you with anything left to fight with, wins. For most people that works fine, but some of us have opened a booster or perused set lists and noticed a card along these lines:

Except without a date attached to it, thanks MTG Goldfish… I guess.

Doesn’t matter that your health is firmly in the single digits, your field is practically empty, and your opponents are about to clear you out of the way so they can start the real fight… you just beat them all. How did you get there? Why weren’t they paying attention to where your Hedrons were going? There are dozens of these cards, meaning that there are masses of different ways to win that circumvent the need to pay attention to your life total.

Many of these require you to build your entire deck around them, or offer a backup plan to your major tactic. Take Hedron Alignment as an example, how does it work and how does it help:

It’s a blue card with a simple blue mechanic, Scry which allows you limited control over what card you draw next.

With it in hand, and two untapped mana on the field, your opponent will always wonder if you’re about to counter their next spell, or dismiss one of their creatures, destroying a valuable play; a cruel but valuable psychological tactic that also contributes to the alignment.

Blue decks are very well suited to manipulating the cards, including ways that allow you to discard cards to power better spells, or take some of your deck, remove unwanted cards to the graveyard, and leave the cards you want on top. With these cards somewhere in your deck, it’s not all that hard to put them where you want them.

And with all of those abilities to move and shift cards around with only a handful of cards, you can also create a deck that does other things. Cards that play from exile, feed from graveyard content, or benefit from controlling the content of your hand, which brings me to the card I found recently:

More manipulation of cards, another possible win condition… actually the two could really bounce off one another… I think I need to be building a deck.

These are not the only paths to victory. Some cards function as countdown timers, relying on a certain number of counters being placed on them, others rely on achieving certain states of play, like having twice your starting health total, being able to pay certain mana combinations, or running out of cards altogether.

Finally, there’s one more win conditions that requires no single card to tell you that you’ve won. Nevertheless it still requires a deck dedicated to it. If a player’s deck runs out of cards, that’s (usually) it.

The term Milling refers to a card called Millstone, but has come to refer to any card tat forces players to put cards from library to graveyard, but thanks to far more vicious cards like Traumatise and Consuming Aberration, the tactic has become a viable, if risky thing to attempt. Most players suffer greatly as their best cards pour from their deck and out of reach, while some only grow stronger and gain more options with a swollen graveyard. And if your primary goal is to see your player cardless, it can leave you open to faster, more aggressive tactics, or vulnerable to the bigger creatures amassing on the other side of the field.

That, and no one likes a mill deck. If you enjoy painting a massive target on your back then go ahead.

One thought on “Magic: the Gathering – Different Win Conditions”