In which we compare the two biggest comic book showdowns as they duke it out on the silver screen. This is the second part of a two part review because it got too long to confine to a single article. Read part 1 here. There are a lot more spoilers to be found in this section so a warning is in effect across the board.

Marvel – This is the first time I’ve seen a Marvel film to which I have read the actual comic! Oh I’m a fan of comics, sure, but my knowledge is broadly based on cartoons, games and research, I only pick up the odd comic here and there, but Civil War felt like a must have.

Well, the Nigeria replaced the Stamford Incident, a disastrous mission by a young band of heroes facing off against a far more experienced villain. The Superhero Registration Act was the original name for the Sokovia Accords but by and large they represent the same thing, except that in the comics the concern was more over identifying rather than regulating supers, and Spider-Man revealing his identity becomes a pivotal moment with major ramifications. I like that Parker and Stark are already bonding though. END_OF_DOCUMENT_TOKEN_TO_BE_REPLACED 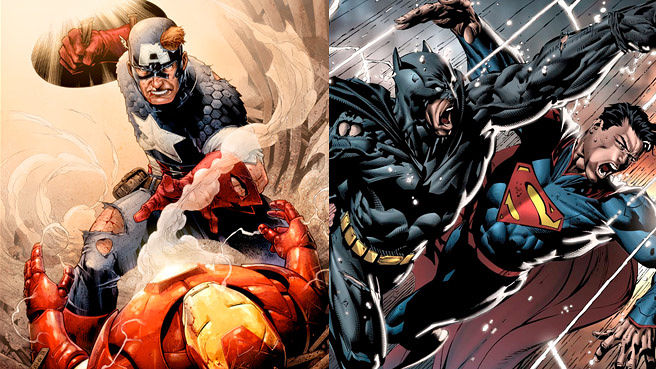 This is no small matter. Welcome to part 1.

The comic book genre has held the cinema by the throat for many years now, and not to everyone’s enjoyment but there’s no question that the results have been incredible. Records have been broken, legends have been made, and culture has been revolutionised. There have been almighty successes, and there have been tragic failures, most of which have been Marvel, but the pinnacle has always been the Universe, the combination of heroes into a single coherent force, and it has been a sincere delight to watch Marvel and Disney built that cinematic empire, and something of an ordeal watching DC and Warner Brothers attempt to rush the same thing.

This year has been a pivotal moment, a test of strength of the two giants of industry. Marvel brought us the Civil War, an unforgettable moment in comic book history where a major event forces legal action to be taken by the world’s governments to be taken against every enhanced human and super-being. DC gave us the grudge match of all grudge matches, two heroes functioning at opposite ends of the spectrum, the beacon of hope in a dark world, and a dark knight who hunts evil where it hides.

There is a clear winner, and there is a clear loser, but it’s not the whitewash victory that I expected, despite my bias. Let’s start breaking this down. END_OF_DOCUMENT_TOKEN_TO_BE_REPLACED

So another San-Diego Comicon comes and goes, and the lucky few have had their chance to wait in mile after mile of queues to discover what the future of nerd-marketed-media holds, and right now there’s three big titles on everyone’s mind:

Recently leaked, and even more recently given a full release – because let’s face it, it was never going to stay SDCC exclusive for long – the Dawn of Justice trailer shows a fuller set up for the conflict, and shows us a clear shot of Wonder Woman in action, and even hints at Aquaman’s origins (it’s subtle, but it’s there). We also get a very thorough idea of how Jesse Eisenberg will be playing Lex Luther, and that’s where I want to start:

Jesse is a small bloke, maybe lacking the kind of gravitas that Superman’s greatest enemy usually comes with, but here we see a very different interpretation, one that I regard with the same kind of optimism as Heath Ledger’s Joker. He looks to have a subtle kind of manipulation, insidiously polite and jovial, I can see all kinds of villainy, and he absolutely has my curiosity. I’d also like to say that Jeremy Irons is an excellent casting for Alfred.

That’s about as positive as I can get for BvS: DoJ. Seriously, another Batman origin story is being crammed into this? We have two JLA characters being shoehorned in without an origins film, this is all getting out of hand. We get that you’re trying hard to play catch-up with Marvel, but this is not something you can rush.

In short, I can hardly contain my lack of enthusiasm. I’ve made my opinion of Zack Snyder very clear, but that’s really besides the point. The trailer has enough positive points that I can’t just right this film off. The true tragedy here is that Affleck is going to be playing Batman twice in the same year without nerd approval…

Now here’s the first DC project in a long time I’ve actually looked forward to for a while, right up until I saw the Joker. From that point on, everything else I’ve seen has increased my concern that this could be another failure. And yet…

The Joker is the biggest question mark for me. With both the loss of Heath Ledger and Mark Hamill retiring from the role with the completion of Arkham City, whoever takes up the role next is going to have a hard time of it, and Jared Leto has certainly weathered the scrutiny on his design. It has its’ prose and cons, he seems to have a decent voice for the job, but I remain unconvinced.

Harley Quinn and Deadshot are the central roles here, Margot Robbie especially seems to be occupying centre stage which makes sense if the Joker is the major villain. I generally have no problem with that so long as the other villains get a decent look in at the action. There are some big names here: Katana, Killer Croc, and Captain Boomerang.

In short, I’m back on the fence about Suicide Squad, which is a positive, but ultimately mediocre shift. The credentials of the director seem heavy on the low-brow action, but this trailer makes me wonder if he’s finally been given the chance to show what he can do.

Couple of things before you click play: 1) Sony have not given up and released the trailer properly yet so this is still “leaked footage”. Get it while it’s hot! 2) This is the Deadpool movie we asked for, so if you can hear it you’ll be hearing strong language.

Well, this certainly sets the tone! Plenty of fourth-wall breaks, a dig at Green Lantern, and just a whole bunch of cool stuff. Not a lot of story though. Not glimpse of the villains who could well be Ajax and Copycat, who are both cast. Could just as easily be Deadpool himself, let’s rule nothing out here.

This, alone amongst the trailers here is a film I am looking forward to, but this trailer doesn’t give us much except renewed hope, and I can’t say much more than that. Marvel have always played their cards a little closer to their chests, and Sony look to be keeping up the business model. Ryan Reynolds is the real driving force behind this film, he’s a nerd in a position of great power within this production, and after last year he has the burden of countless nerdy hopes on his shoulders.

Summer must be coming, as YouTube is awash with rather awesome looking film trailers, so as we prepare to retreat to air-conditioned halls devoid of sunlight let us take a gander at this season’s offerings.

It occurred to me recently that if this film is awful, then that will be a complete set. The 1994 film, the recent attempts from 2005 and 2007, and finally this one. I have to say I am less optimistic having now watched the new trailer, and not because of the weird Johnny Storm thing (I mean Reed Richards would have made so much more sense, unless you’ve got a plan for the whole “adoption” idea… that’s another rant though, one that other people have beaten me to). END_OF_DOCUMENT_TOKEN_TO_BE_REPLACED