So often board games strive to emulate the rich depth of gameplay enjoyed by role-playing games. Often the result is a thin facsimile or an unwieldy brute of a game, and rarely does role-play enter into the equation, but here we have at least one game in which role play is the whole point. In Role Quest by Hercules Game Studios you assume secret characters, place them opposite one another in locations and situations, and act them out. It is down to your opposing players to guess who you were. Sounds fine. Until you add curses. Speaking in rhyme, singing, impersonating someone, some new complication to add to your efforts.

Best of all the game is limited to two rounds, and a time limit is set on each and every role-play, meaning that it’s a quick game that plunges you straight into a narrative, it’s over quickly to move on to something else, or to get another round in. Locations offer new options to alter the tactics of the game, treasures help twist the flow of the game, and there is a fixed point scoring system, but ultimately it’s a game of improvisational acting skills and character playing that’s great for people who don’t think they’re good at that sort of thing.

I think this is also one I ought to add to the GeekOut Shrewsbury library.

As I write this, the game has surpassed it’s funding goal of £4,500 in the last half hour or so with twenty one days (ending August 9th) left to go to achieve some stretch goals. So let’s take a look at what Hercules Games are going to funding…

There’s very little more to say about the game itself, especially now it’s past the finishing line, so let’s take a look at what Hercules Game Studios can do with just a little more money.

£5,000 At goal + 500 we see our first new location, The Guild. With only three locations, that could prove an essential for replayability.
£5,500 The City Guard is introduced as a new possible character, a classic for every fantasy setting.
£6,000 The Temple is added as another new location, which should also help boost the diversity of the game.
£7,000 A timer for every copy of the game to help keep things moving without the need for breaking out the clock on your phone. Of course supporting apps are ever more popular these days but they can often be poor compromise to having an actual timer to slam onto the table. But I digress.

With a fairly tight cluster of stretch goals and so much time left after hitting the 100% mark, Role-Quest might need to add more goals, and fast. Perhaps more characters and locations, but with a game this simple there is definite scope for expansions. At least one expansion has already been created (more info in the pledge rewards below) but I can think of several directions this game could take with very little thought.

So what do you get for your money? 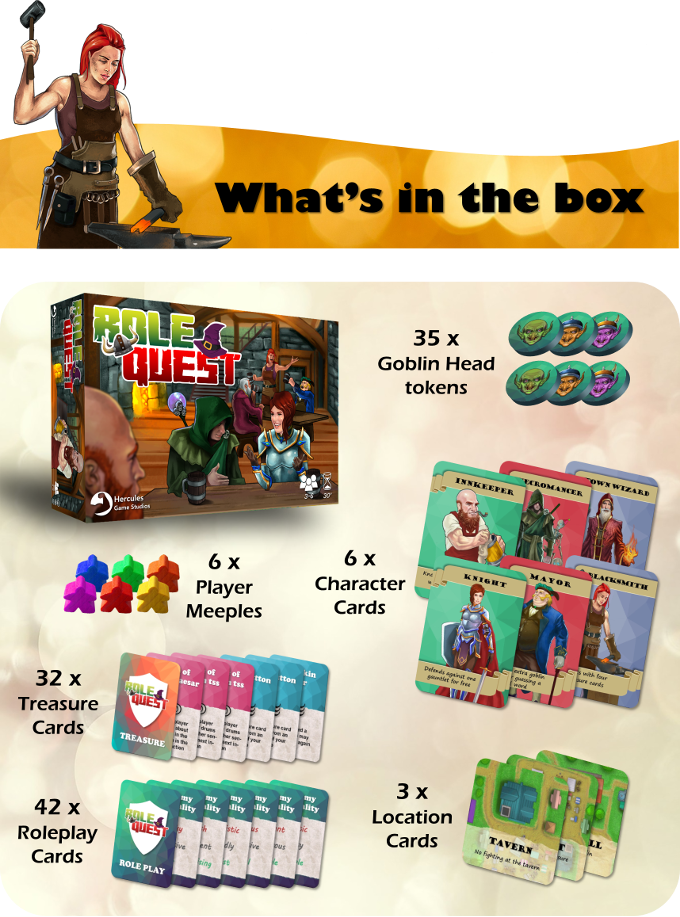 Wizard Pledge: For each Wizard pledge, Alex, Phoebos or a guest will roleplay a personality of your choice on video after the end of the campaign (the personality must be appropriate for all audiences)

Interestingly there is no option for a £1 “tip jar”, I like that the most basic option still gives something back. Also, not included here is a retailer specific pledge, but go check out the campaign if you’re a stockist.

Innkeeper Pledge: One copy of Role Quest: the card game of legendary role-playing

Blacksmith Pledge: One copy of Role Quest: the card game of legendary role-playing and the mini expansion.

The expansion will be NSFW and for ages 18+, which I feel is a somewhat necessary addition to this game, not because I think the game will need it, but because for the type of people I play with, I will need it.

Mayor Pledge: Two copies of Role Quest: the card game of legendary role-playing and two copies of the mini expansion.

This may seem odd, but by the time you incorporate shipping – at least within the UK, US, and Germany – you’ve saved a total of £5, and more if shipping elsewhere in the world. It does become worth it to share the burden of your pledge for the sake of £2.50 each.

Currently about half of these remain, 22 out of 50. If you want a personal and unique touch added to your game then it may be worth looking into this option. I might not go for the whole thing, but I may be tempted by that Role-Player’s Handbook if it’s available separately after the pledges are completed. I’m a sucker for role-playing accessories, and this looks like a quick and easy way to create or adapt characters. The book can help turn Role Quest from a basic board game and turn it into something one might use to actually enact small role-playing games, or incorporate it into existing campaigns to create in-game impact.

I actually ran across the game at UKGE. I was plainly suckered in by the wheel-spin (I won a sticker, I am perfectly find with this) but I talked to the designers and was immediately quite interested. A means of creating short and punchy RP scenarios to play out short vignettes or to draw people into the concept of role-play is right within my wheelhouse. I sincerely wish Hercules Game Studios the best of luck, not just with Role-Quest, but in their future endeavours too.

In the mean time, check out the Kickstarter today.

The phrase ‘so nice we will do it twice’ comes to mind. Yep, Chris is back with five more projects that he saw at UK Games Expo that will be on Kickstarter in the future, games that he declares are worth looking at. If you’ve not checked out part 1, you simply must, as these are some exciting titles coming to the crowdfunding platform soon.

The phrase ‘so nice we will do it twice‘ comes to mind. Yep, I’m back with five more projects that I saw at UK Games Expo that will be on Kickstarter in the future, games that I declare are worth looking at. What do you mean you didn’t read Part 1? Go do so now and come back. For the rest of you, I’ve rambled enough, it’s time to kickstart this post into action (see what I did there?).