With the release of Noctis on Tekken 7 this past Tuesday, I felt it was only appropriate to check out another Final Fantasy product. Whilst I could review any Final Fantasy game, including the incredible Final Fantasy Tactics series, I felt that I’d pick on something relatively new. Weighing in at a whopping 1.5gb on my phone, Final Fantasy Brave Exvius is one of the latest attempts at storming Android and iOS by Square Enix. How does Brave Exvius stand up to other mobile titles, how ad-heavy is it and more importantly, what do you actually do on it?

With the release of Noctis on Tekken 7 this past Tuesday, I felt it was only appropriate to check out another Final Fantasy product. Whilst I could review any game within the franchise, including the incredible Final Fantasy Tactics series, I felt that I’d pick on something relatively new. Weighing in at a whopping 1.5gb on my phone, Final Fantasy Brave Exvius is one of the latest attempts at storming Android and iOS by Square Enix. How does Brave Exvius stand up to other mobile titles, how ad-heavy is it and more importantly, what do you actually do on it?

END_OF_DOCUMENT_TOKEN_TO_BE_REPLACED

Well look no further my friends, as fellow bloggers Legend of Lotus have created an awesome game with the RPG Maker platform and they’re looking for your help!

Legend of Lotus is an RPG being created by some of our fellow WordPress bloggers who have been documenting their journey through developing their very own RPG. They are creating everything, from the code in the games to the artwork and sprites. If you want to check out what they’ve done up until now, do check out their awesome blog.

In the world of Genos, which is inhabited by humans and elves who live in harmony, the Lotus stone is bringing sentient lives to… Well life. A subset of the elves played with the dangerous energies of the Lotus, which caused an explosion, destroying the shared capital of the humans and elves.

Because this has been made with RPG Maker VX software, the flexibility is pretty remarkable. The picture above is a picture from in-game, where Shane has had his picture put into the game itself. So, looks like the rewards for helping these guys out could lead to some memorable places to have your… Faces… Poetry strikes again.

There’s a rich story and plenty of hours have been poured into this. It’s been brilliant reading through their development posts over on the Legend of Lotus blog.

What do they need the money for?

The cash helps them get the correct licenses and helps to pay for anything they need to finish the game off. At just $2,000, this might be the lowest ever ask on a Kickstarter Highlight.

One of the other things they want to buy is a domain name for their website (Rather than being stuck to the generic “.wordpress.com” domain). By pledging just a few dollars today, you can help them on their way to making Legend of Lotus a commercially viable success and this could even lead to bigger and greater things from the small team! 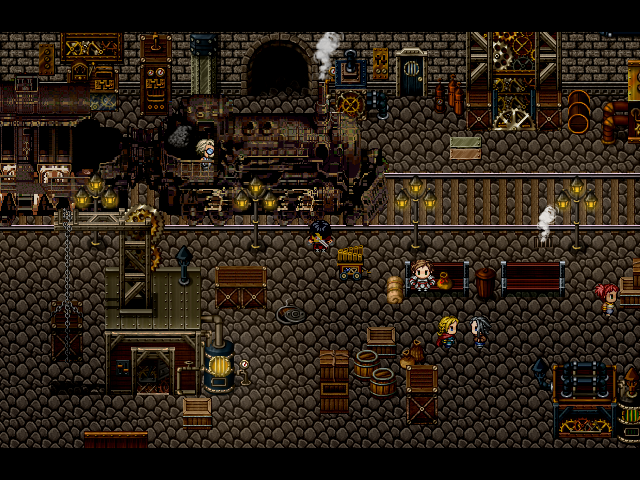 Oh damn you and your reward wanting, isn’t the warm fuzzy feeling enough? No? Okay, carry on then…

There we have it, if you feel like you want to share the WordPress love, then please do go ahead and back this game. It looks brilliant and I hope they get the funding they’re looking for!

For the record, I’ve pledged myself, so please do help these guys out. They’re truly lovely people and I’m excited to see what they’ve made!

What do you all think of the game? Have you visited their blog before? Have you used the RPG Maker software? It’s damn good fun, if not! Give it a try if you get the chance to.

How about an RPG reminiscent of Pokemon?

Do you want to learn the Japanese language and more about Japan?

Have you answered yes at least once here? Great, you might want to know about Koe!

Before we continue then, let me first of all explain why a JRPG is different to a “Western” RPG. In a JRPG, you generally have a linear goal (Looking at you, Final Fantasy). The goal is usually “Save x. Then do x.” Or something like that. In Final Fantasy IX, my all time favourite JRPG, you have to save the world and play the story of characters. You have no branching paths, it’s a linear path to the end.

Does this mean it’s dumbed down? No! Certainly not! If anything, I think it sometimes shows more skill to follow a character or characters through a series of events. It means the writers have to be on the ball.

Koe – How does it stand out?

Koe stands out as it tries to do something new. It tries to teach you Japanese (At least the basics) which is great, as a lot of JRPGs aren’t ported over to other languages, which makes them somewhat obscure to the non-speakers.

Occasionally, you may pick one up, not understand what your goal is and just wander aimlessly. Or you can do what I do, which is do that – and still manage to beat a game – and still not know what you did. This really happened once :(

But this is a game?

Yes, this is a game that is about arriving at Japan. You quickly find out that it’s not exactly the place you once thought. No, there are monsters, dungeons, castles… Oh my!

So, whether or not you want to learn Japanese, this game is also – That. It’s a game.

It’s a great idea and I’m interested. My cash is going to go towards it and since it’s already over 100% funded, I can’t wait until March 2015 for my copy of Koe.

By the time I had found this Kickstarter campaign, it has already reached its target! If you were to jump with funding now, you’d get the game for a platform of your choice (PC, Mac or Linux) for £10:

June 2015 is quite some time away, so you’ll likely forget you even purchased this game. Then, one day, you’ll get this lovely little digital game which’ll help you learn the Japanese language. Speaking of which, what does this actually teach you?

It’s quite basic when you break it down, because this was meant to be for people who wanted to either learn from the start, or to add to their studies of the Japanese language.

I keep meaning to learn Japanese properly, perhaps this’ll give me that much needed kick to learn it properly.